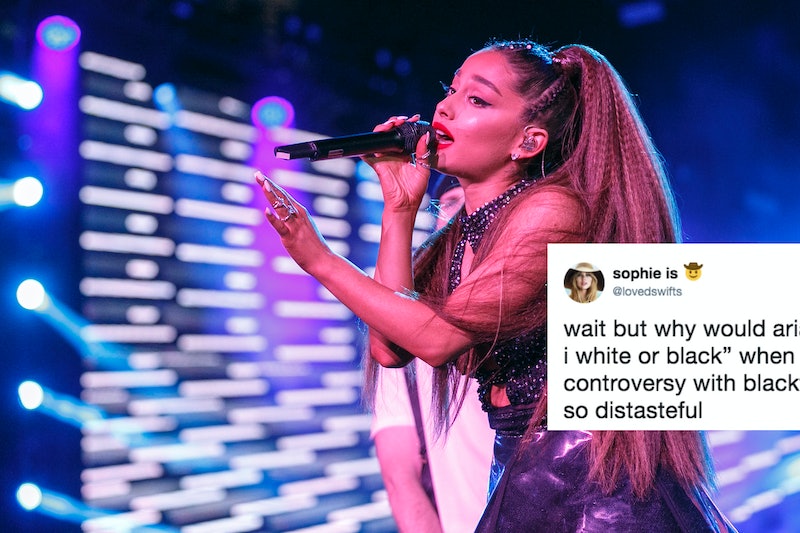 Lil Dicky's star-studded new song "Earth" wants to get people talking about climate change, but there's one celebrity cameo in particular that's started a debate on social media. Ariana Grande's zebra lyric about being "white or black" is sparking some backlash on Twitter, especially in the wake of the debate over cultural appropriation that has followed Grande in recent months. (Bustle reached out to Grande's rep for comment, but did not receive an immediate response.)

In the animated video for Lil Dicky's climate change song, Grande voices a zebra, who sings, "Hey, I'm a zebra / No one knows what I do / But I look pretty cool / Am I white or black?" While the lyrics are likely part of the song's parody about the various animals that inhabit the earth — after all, Justin Bieber plays a baboon who sings about the size of his "anus" — some fans feel as if the line is a reference to the controversy that surrounded the singer after the release of her song, "7 Rings."

In February, shortly after she released "7 Rings," rapper Princess Nokia accused Grande of copying her song "Mine," and appropriating her lyrics about celebrating black women and their hair. Soulja Boy also pointed out supposed similarities between his song "Pretty Boy Swag" and "7 Rings," while 2 Chainz also suggested on Instagram that Grande's music video, set in a pink mansion, was a rip-off of his Atlanta Pink Trap House. (2 Chainz and Grande later collaborated on a remix of "7 Rings.") Meanwhile, outlets like Bossip reported that the singer was receiving criticism for her apparent tan and use of a "blaccent," with some social media users accusing Grande of appropriating African American culture.

As a result, Grande's line in the "Earth" video struck some fans as inappropriate in the wake of the debate about appropriation:

Others pointed out they believe it was a joke, but it did rub plenty of people the wrong way nevertheless.

While Grande hasn't explicitly addressed the cultural appropriation debate, she did explain why she referenced her "weave" in "7 Rings" following Princess Nokia's comments about the song. Shortly after the song was released, the Instagram account The Shade Room posted a since-deleted Instagram Story in which Grande reposted another person's Insta Story about "7 Rings" that joked, "white women talking about their weaves is how we're going to solve racism."

After the account noted that Grande's repost "has fans upset because they feel she's missing the point of the backlash," the singer commented on the account and apologized, explaining that she was "sorry if my response was out of pocket or if it came across the wrong way," and clarifying the original intentions of the post. "I think her intention was to be like... yay a white person disassociating the negative stereotype that is paired with the word 'weave.'"

However, Grande hasn't only faced accusations of cultural appropriation from the African American community. In February, the singer faced a backlash after getting a tattoo on her palm in Japanese, that read "BBQ Grill" instead of "7 Rings," as she intended. The singer also used Japanese kanji and imagery on the artwork for the single, as well as in the "7 Rings" video. She attempted to fix the ink soon afterwards — the updated tat now reads "Japanese BBQ finger" — but she still weighed in on the controversy in a series of since-deleted tweets.

According to Glamour, the tweets continued, "U kno how many people make this mistake and DON’T care just cause they like how it looks? Bruh… I care sooooo much. What would u like me to do or say? Forreal. There is a difference between appropriation and appreciation. My Japanese fans were always excited when I wrote in Japanese or wore Japanese sayings on my clothing. However, all of the merch with Japanese on it was taken down from my site not that anyone cared to notice.”

Whether or not the lyric in "Earth" is meant to be a reference to Grande's cultural appropriation controversies, it's clear that the debate over whether or not the singer is appropriating different cultures or simply showing appreciation for them will not go away any time soon.