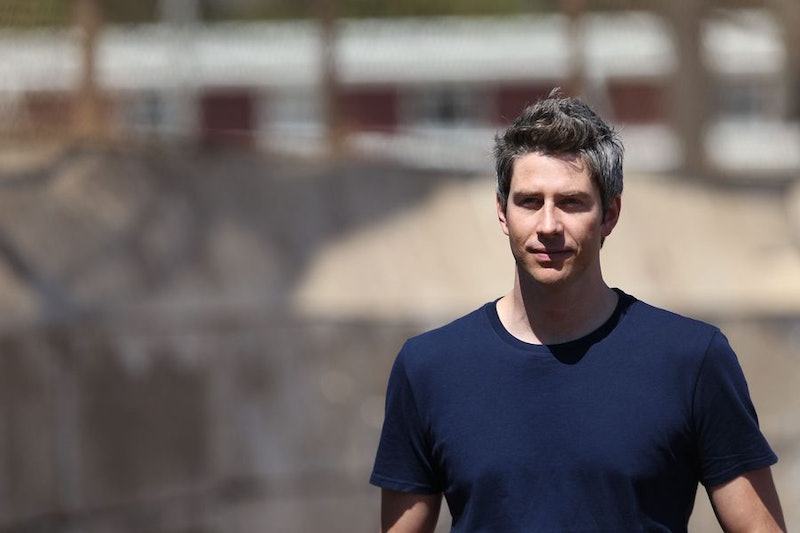 On Monday night, Arie Luyendyk Jr.'s season of The Bachelor officially kicked off, and with it came some major drama from one of his former fellow Bachelorette contestants. But despite what his detractors might be saying, Arie's response to Jef Holm's diss shows that he's planning on taking the high road on this one.

If you're not familiar with the tension between Arie and Jef, it all started back when they were Emily Maynard's final two picks on The Bachelorette. Arie was absolutely heartbroken when, instead of getting his chance to propose, Emily sent him home. But, he was still thinking about her for so long afterwards that he ended up flying to her North Carolina home to deliver the journal he'd kept while filming in hopes that his words could change her mind about him. During After The Final Rose, Emily revealed that she'd never read the journal out of respect to Jef and their new relationship, and that was that.

However, even falling in love with the same woman didn't stop Jef and Arie from being friends, and they even posted photos together after The Bachelorette. All seemed to be good between them then, but now, it seems their bromance has officially come to an end. For whatever reason, Jef is holding a grudge against Arie, tweeting this during Monday night's premiere:

That's a very bold statement to make on night one of The Bachelor, especially since, after watching the episode, it's pretty clear that there were a few women Arie definitely hit it off with. And rather than respond to Jef with a tweet of his own, Arie shared his thoughts during an appearance on Access Hollywood this week.

"It's like he's throwing a lot of shade. But we haven't talked in four years since [Sean Lowe's] wedding ... I have so much to concentrate on with this, and I'm just trying to stay positive and negativity is — you know, I'm just concentrating on me."

And when Arie was asked why Jef might be bitter after all this time, he said, "I I have no clue. That’s kind of a question for him more than me.”

Hearing Arie's response to Jef's tweet confirms the persona Arie's put forth all along. He comes across as a mature guy who's ready for love, and that's where his focus is at — not on any social media drama that is happening. And as entertaining as it would have been if Arie had a sassy comeback up his sleeve, honestly, there probably couldn't have been a better way for him to respond to a tweet than the way he did. Anything else he might have said could have just fueled the fire, but this way, he shuts it down at the source.

So far, Jef hasn't revealed why he's holding a grudge against Arie and his new journey for love this season, although he did say that he stopped being friends with him "because he's disgusting." That particular statement came in response to Reddit rumors Reality Steve tweeted about claiming that the former BFFs used to hang out at sorority houses together, but that's a topic that neither Arie nor Jef has expanded upon, other than in this tweet from Jef:

Well, it's probably safe to say that Jef won't be showing up on The Bachelor this season to surprise his friend with a show of support or anything like that. Even so, it doesn't sound like Arie is too bothered by it — he's simply too busy enjoying the crazy Bachelor journey he's on to think about it. Maybe any other rude comments Jef might make this season will roll right off Arie's back, too. It's too exciting a time in Arie's life to deal with that kind of negativity.