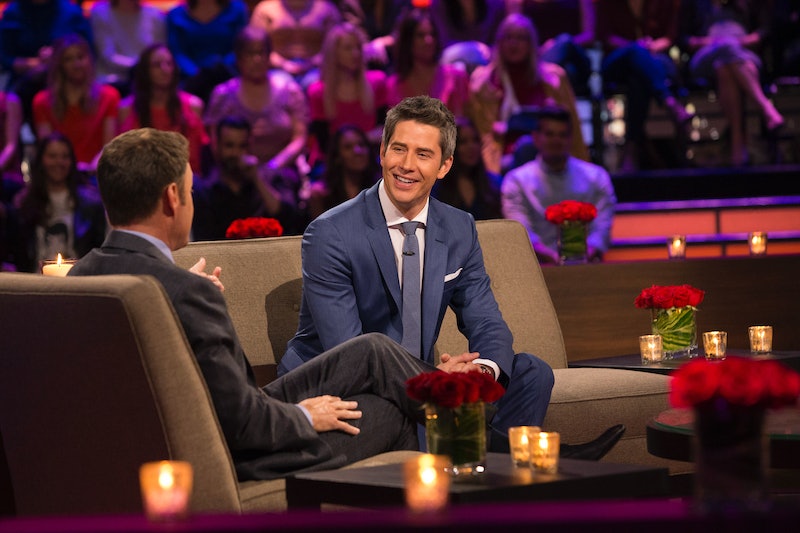 After Sunday night's The Bachelor: Women Tell All special, it's obvious that some major drama is set to go down during next week's finale. But according to the leading man himself, maybe fans should wait and see how everything plays out before they pass judgment. In an interview with E! News, Arie said after the Bachelor finale people will understand him a lot more, because there are certain things he's waiting until the finale to talk about related to what goes down.

In case you missed it, at Women Tell All eliminated contestant Caroline Lunny gave Arie a piece of her mind when he took the stage. She broke down into tears as she told him that she knew what he did and she was not happy about it — although she remained very vague and didn't reveal exactly what she was talking about.

"I don’t know how you could do that and I just really don’t understand," she said. "But I really hope you found what you’re looking for. You don’t need to answer me but I needed to say it."

So far, The Bachelor has yet to clue fans in on what Caroline might be talking about, but whatever it is, it seems like Arie really wants people to hear him out.

In fact, he told E! that "there are things I want to get off my chest," promising that will happen during the finale.

"I think that people are going to understand me a lot more and understand the ending and understand why Caroline's upset. But this is my journey and this is about finding a lasting love and that road is not always the easiest. Hopefully people will understand more."

Well, we'd have to understand more, because right now the information fans have is at a solid zero. He's right that finding lasting love isn't always easy, or else shows like The Bachelor wouldn't exist. But it's hard to figure out how to take his words when we don't have the whole story.

Whatever happened, though, it has to involve Lauren or Becca — and at this point, it seems like it's going to get pretty real, since during Monday night's Fantasy Suite dates, he told both of them he loved them with no reservations. No matter what happens, he's going to hurt someone who, as of the most recent episode, seems pretty reassured that they're getting that proposal.

But no matter how fans feel, it seems like Arie isn't actually worried about it since he got what he wanted in the end.

"It's all about the ending and finding that person for yourself and that's the important part. I'm very happy," he told E!.

That's fair enough. If Arie is taking The Bachelor process seriously and truly wants to get engaged to someone he's spending the rest of his life with, making sure he's with the right person would have to come above all else. In that case, it would ultimately be better for him to do whatever he needs to do, even if he has to hurt feelings or disappoint people along the way. But would it have killed him to drop a hint or two about what happened?

If the curiosity is getting to you, too, don't worry — there's only a week left until all your questions will be answered. This season, The Bachelor finale has been split into a two-night event, which means whatever's about to go down is going to be big. And if Chris Harrison were here right now, you know what he'd say...

Why not end the season with a bang, right? Let's just hope all this drama is worth the wait.