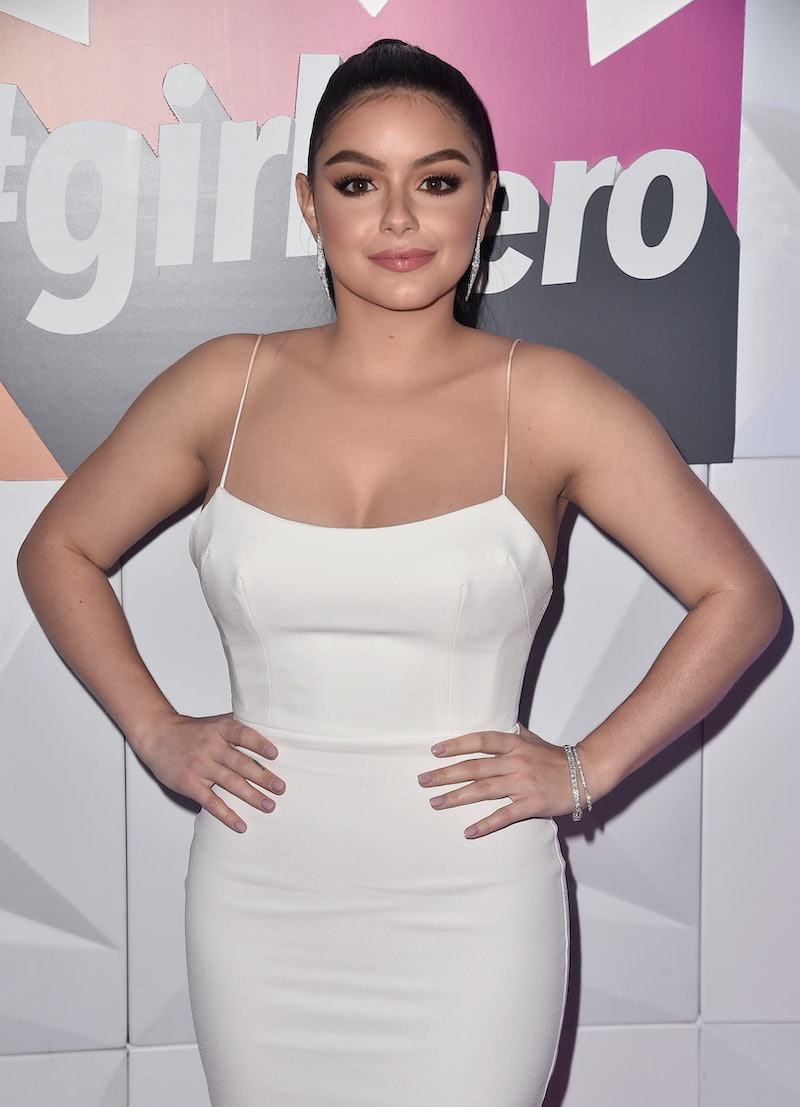 Following the 2017 Women's March and massive upset over the presidential election, feminism has seemingly been more at the core of major cultural dialogue and issues than ever before. And naturally, that's led to many people debating what it really means to be a feminist: what does one have to be like? Look like? Say or do? Speaking on the red carpet at the Girl's Up #GirlHero Awards recently, actor Ariel Winter explained why there's no one definition of what feminism looks like, no matter what some people think.

"I sometimes get upset when people say they're feminists but they do nothing for it, they put feminists in a box," Winter tells Bustle on the red carpet. "I think feminism is anything you want to be."

And the Modern Family star walks the walk, constantly proving that appearance and political beliefs aren't mutually exclusive. The 20-year-old proudly posts photos showing off her body on Instagram, even though such posts are often the center of controversy. Winter clearly doesn't care what people think — she knows what her beliefs are, and that's what matters. "I hate the fact that... you have to look a certain way to be a feminist, you have to act this way, you can't wear a short dress and be smart, you can't look a certain way to be a champion for your sex," she says.

While women have made massive strides since first-wave feminism took hold decades ago, Winter notes how there are still many people with an unfortunate, dated mindset about the female population. "There are still people who think that we have a specific role: that we can't do the jobs that men do or the jobs that are important, that we're meant to cook and clean and stay home with kids," she explains. "And here's the thing: there's nothing wrong with that, if somebody wants to do that," she says.

Winter further raises an excellent point about another misconception of feminism. "The other thing that bothers me is sometimes when people say feminist, they put it in a way that makes us seem like we want to have power over everybody," she says passionately. "We want equality. Across the board. And that's what feminism is supposed to be."

Reminding oneself of that core belief and what feminism is all about is crucial, according to Winter. "We want to be equal to everybody, to all groups in the world. We don't need to be above anybody," she says. "Because then we're doing what the people [are doing that] we don't want to do. We don't want that from them, so why would we do that?"

And while policies and societal standards that are influenced by feminism certainly aren't simple, practicing feminism in daily life can be. For Winter, it comes down to supporting fellow women and truly taking action.

By voicing opinions such as these, Winter is helping with the exact change and awareness she's urging others to help create.

More like this
Michelle Williams Laughs Often About Motherhood Thanks To 'The Fabelmans'
By Marina Watts
'Wakanda Forever' Is Already Opening Doors For Mabel Cadena
By Grace Wehniainen
Marcus Mumford, Open Book
By Ilana Kaplan
A Couple Of Pints With Brooklyn Beckham
By Mickey Rapkin
Get Even More From Bustle — Sign Up For The Newsletter