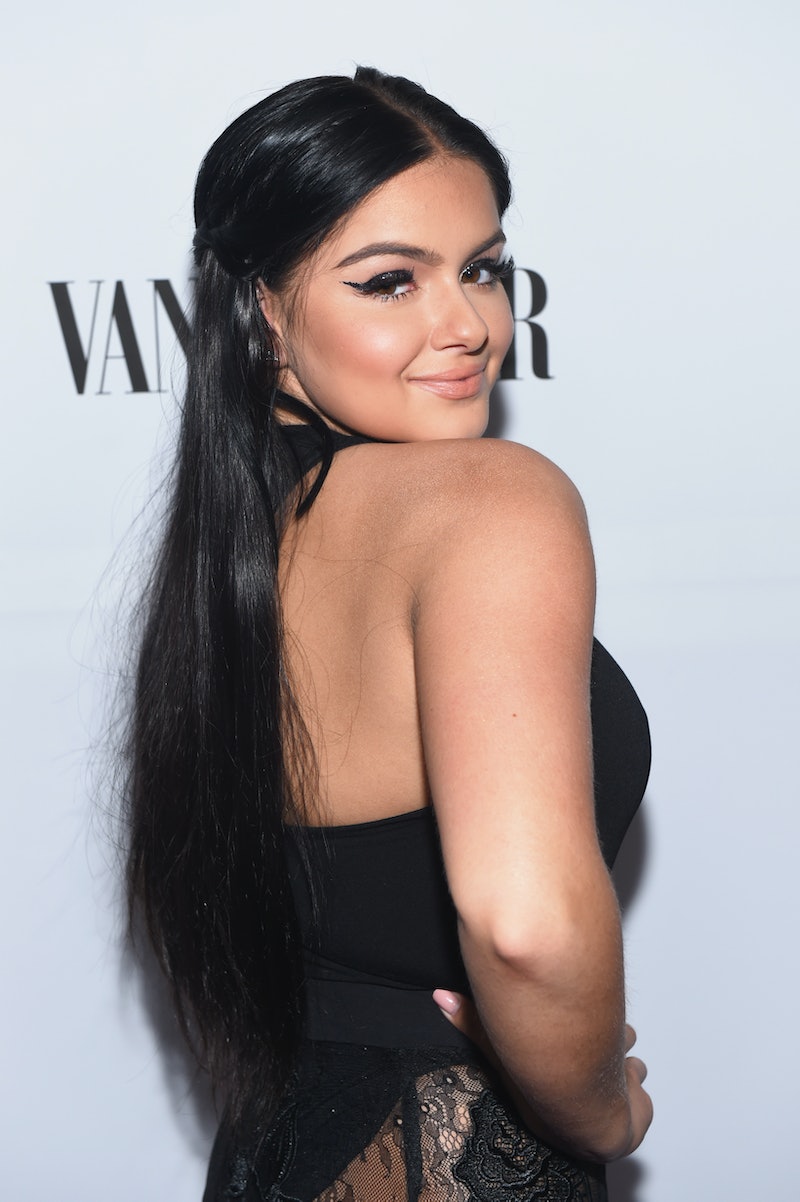 As soon as I meet Ariel Winter, she appears to exude self-assurance. Having watched her grow up on-screen as Modern Family's Alex Dunphy, I'm in awe of her seemingly effortless combination of confidence and candor in real life. But, then again, should I really be surprised? In recent years, Winter has become a powerful voice among young people — frequently standing up for herself and promoting self-love on social media. And, in person, those are messages she radiates through and through, in a way that is truly inspirational. But hold on a minute. Before you call the 19-year-old a "role model," you should probably pause and rethink that phrase.

In Dog Years, Winter plays Lil, who embodies everything about millennials that would make the older generation cringe (she curses, she wears revealing clothes, she's never on time, etc.). Her character lives in stark contrast to Burt Reynolds' character Vic Edwards, who's a washed-up actor coming to terms with his old age. But, when you look beyond the flaming red hair or the body covered in tattoos, Lil is a girl who doesn't let others define her; she flips the script on any stereotype.

One particularly powerful moment in the film happens when Lil finally dumps a guy who treats her poorly — not only cheating on her, but physically shoving her. "It's important for people of all ages, but especially young people to see a character rise up out of that," she says, "and be strong and take charge of her own life and decide that's not what she wants and that's not what's good for her."

That's a message that the star promotes beyond the movie: knowing your worth. Fans saw this in an empowering Instagram caption Winter posted after she received an onslaught of hateful comments for posing in a bikini. "People were saying I was 'asking for it' because I was in a bathing suit, that I was a slut and all these things," she recalls. "It was really, really disgusting. It felt really crappy to have people saying that stuff about me, especially in a photo with my nieces on a boat vacationing somewhere."

And, let's be real, she's not the only one who deals with that kind of hate. Just ask any woman on the internet. Winter highlighted that when she stood up for reality superstar Kim Kardashian, who got slut-shamed for posting a nude selfie, tweeting, "No one was body shaming @justinbieber when he posted his nude guitar photo so why @KimKardashian? #herbodyherchoice" and "I think everyone, men and women, should have the right to choose what they do with their bodies — and not be criticized." Her solidarity resulted in Kardashian sending her flowers as a thank you, a gesture which the actor deems "really touching, because women supporting women is something we don't see a lot these days."

But she didn't speak up so that Kardashian would thank her. She spoke up because she believes enough is enough. "I just think it's ridiculous that people shame people for anything, especially slut-shaming. It's like, really? You know, guys post things all the time, and nobody says a word to them," Winter explains. "But the minute we post anything — god forbid we have cleavage or our butts out, whatever. It's like, the world is over and we're ruining kids' minds... It's just like, no. If you don't like it, don't look at it."

"I feel like more people should be that way — unapologetically themselves."

For these reasons, Winter, and her character Lil, are strong voices that we need now more than ever. "I think it's important to use whatever platform you have at this time to lift people up," she shares. But before you aspire to live your life exactly like the actor, she doesn't want that either. Instead, she says, "The most important relationship you can have in the world is the relationship you can have with yourself."

"A lot of people these days try to be what they see on TV, or try and be something else because they think that's what's right, or that's what's cool. And I get it, I struggle with the same thing," she continues. "But at a certain point, the only person you should be worried about pleasing is yourself... No matter what you look like, or what you think you look like, or the person you think you are, you are special. And you were made that way for a reason."

So, yeah, maybe Winter is not a "role model" per say. But she's wise beyond her years. She's a talented actor. She's a champion for her fellow females, a body-confident young woman, and someone who's trying to improve the world around her by being honest. And guess what? She doesn't have to be perfect to do so.

More like this
UK Viewers Will Have To Wait To Watch The Handmaid’s Tale S5
By Maxine Harrison
Help! I'm Not Getting Any Attention On Dating Apps. What Can I Do?
By Sophia Benoit
The 12 Best Strapless Bras That Won’t Slip & Fall Down
By Audrey Williams and BDG Commerce
Megan Rapinoe's Relaxation Hack Is Super Dreamy
By Carolyn Steber
Get Even More From Bustle — Sign Up For The Newsletter