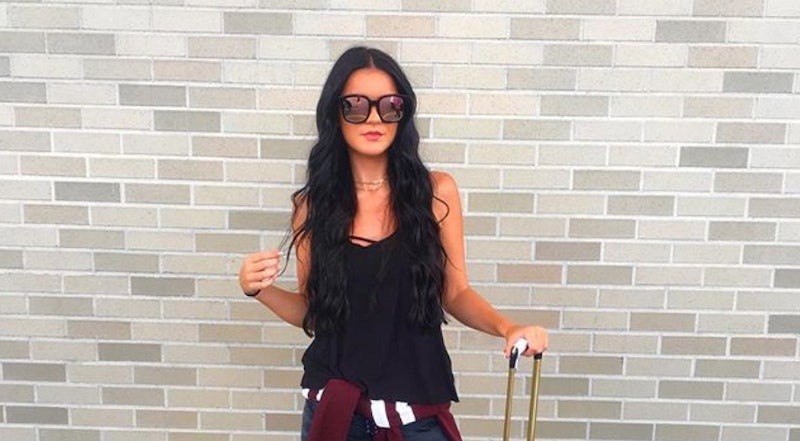 After competing on Nick Viall's Bachelor season and finding love on Bachelor in Paradise Season 4, Raven Gates knows this franchise inside and out, and she's dishing all to Bustle. Now, read what Raven has to say about Arie's super awkward Bachelor season.

Week 3's Bachelor episode should have been titled The Bachelor: The Most Awkward Episode EVER. Between group dates that involved hair pulling and unruly dogs, to a cringe-worthy one-on-one, to an embarrassing kiss denial, this episode was everything awkward and MORE. Yes, I said more. Shall we dive in even though I get second hand embarrassment just thinking about it all? Yes.

The first group date was a wrestling date with the women of the original GLOW (Gorgeous Ladies of Wrestling). This may have seemed super fabulous at first; however, it was anything BUT. The ladies of GLOW were there to teach the girls how to wrestle, but that ended up including a lot of taunting of the contestants. It all translated to me as nothing but just plain insults. They asked Bibiana why her mom spelled her name that way (rude!) and pulled on Tia’s ponytail. This caused Tia to immediately tap out (pun intended) of rehearsals, and sent her into a slight emotional break down. It was a lot for a first date of the episode.

Fortunately, soon enough, Tia and Bibiana both were able to collect themselves and get ready for the actual wrestling show performed in front of a live audience. But, before the wrestling began, Arie and Kenny King from Rachel Lindsay’s season took to the ring for an epic smack down of Arie. I mean literally. It was Arie being bodyslammed by Kenny. I mean Kenny is a professional wrestler and all... but dang! At least act like Arie had a chance.

I don’t know about you, but I thought this was an awful date for ladies who are competing over a man in the first place. I'm definitely not suited for that kind of date. When the GLOW women insulted Bibiana’s momma, my gloves would have been off. And if that GLOW woman had pulled on my ponytail? I wouldn’t have cried like Tia, I would have gone in.

Luckily, I wasn’t on this date because I would have Kenny King’d that GLOW lady and body-slammed her. However, I don’t blame Tia or Bibiana for how they reacted. When you are that uncomfortable, it is always better to remove yourself from the situation until emotions calm down. In the end, the wrestling proceeded like planned, but there was sadly no Krystal/Bibiana match-up. That came later in the episode and outside of the ring...

That night at the cocktail party, Krystal ruffed feathers by stealing Arie first (what else is new?) and Bibiana couldn't let it go. She brought up her concerns to Arie, and everyone knows that complaining about another contestant never ends well. Bibs couldn't focus on just being there for Arie, and he didn't seem pleased. That all plays out at the cocktail party, but first, another awkward date!

Arie put the GLOW date behind him and jetted off to a cringe-worthy one-on–one. I kind of felt for Lauren S. here. We all get a little wine drunk sometimes — especially in The Bachelor mansion, believe me — so the fact Arie had their date at a winery in Napa Valley just seemed like he was setting her up for failure. (Side note: Isn’t this like the third plane ride we’ve gotten on The Bachelor this season? What's wrong with a classic helicopter?) ANYWHO, once they reached Napa Valley it seemed like Lauren S. couldn’t stop rambling. She even said, "I’m all over the place." Oh, Lauren, I wish you had aborted mission as soon as you started feeling not like yourself. Unfortunately, Arie wasn't really connecting with her and sent her home. Ah, well. Live and learn, Lauren. Don’t beat yourself up over this one.

But, the awkward dates didn't stop with a one-on-one elimination. The next group dates was all about dogs! The dogs weren't the awkward part; to me it was the best group date ever! Who would hate being with puppies all day? Oh, yeah, I forgot — Annaliese. She not only had that awkward montage last episode of her traumatic bumper car experience as a child, but now also got a second awkward montage of her childhood experience where she was bitten by a dog. As we say in the south, bless her heart. (It's used as a sincere expression of sympathy and/or being condescending — I’ll let you decide which definition to use here.)

Then, to make things worse for Annaliese, the show MADE HER THE DESIGNATED POOPER SCOOPER. What a trooper. A trooper pooper scooper. In any case, I hate that Annaliese has had such horrible childhood memories. Can someone please get this girl on a date that will add some happiness in her life?

Dog trauma aside, Ashley, Becca K., Caroline, Chelsea, and Jenna competed on stage with their pups, who were supposed to be doing tricks, but just frolicked around on stage without a care in the world. It was silly, and fun, and almost enough to shake the episode out of its awkward... oh wait.

The night portion of the date got even worse for Annaliese (bless her heart). Her time with Arie was awkward to say the least; he even looked away during their conversation. It was official. Annalise wasn't recovering from this, but that didn't stop her from trying again. (Bless. Her. Heart.)

Just when you thought the week of awkward dates was over — we still had a HELLA AWKWARD cocktail party to attend. It sadly continued to be not so great for Bibiana or Annaliese. At the cocktail party, Bibiana set up a romantic candle lit area to star gaze with Arie. It was the perfect set up… until it was being used by the other girls. Lauren B. used it first for a chat with Arie, and then Arie and Bekah were seen lying down and cuddling right where Bibs was planning to have her romantic time with him. YIKES, this was so cringe-worthy I could hardly watch.

All while this was going down, Annaliese was reapplying lipstick and making a plan to finally get her kiss from Arie. And, in the most awkward moment of the whole episode, Arie told her he wasn’t ready… yet. Which left Annaliese wondering, “Do I even have a chance to have a connection?” She needed answers. She made the decision to go back and ask Arie.

I wanted to yell at Annaliese through the TV, “PLEASE DON’T GO BACK! Save yourself the embarrassment, girl! You already have your answer! The kissing bandit TURNED you DOWN!" That was a 'do-not-pass-go' type of hint, but since this was filmed months ago, Annaliese couldn't hear my shouting at the TV and went back for final confirmation.

I will say, I get trying to hold on to the tiniest bit of hope. If Arie would just of been super blunt and said, “I’m not feeling you at all. I never will," Annaliese could have and would have accepted that — or I’d like to think so, anyway. Needless to say, Arie sent Annaliese home after their, like, 100th awkward chat. I just hope this isn’t another traumatic memory for Annaliese! The only bright side is, there’ll be no more terrifying dates for her from here on out. Unless she goes to Paradise or something and we discover her long lost fear of [insert anything here].

With Lauren S. gone and Annaliese going home, this left only one rose ceremony elimination. We all could probably guess by then, seeing as though the stars weren’t aligned for her (pun intended), that Bibiana was going to be the one to go. I was sad to see her leave, though. She was so fun! But, I have a funny feeling we will be seeing more of her…

In any case, here's hoping next week's episode is way, way less awkward. I love some action, but this was all cringe! I'll take my Bachelor drama with a lot less embarrassment, please.