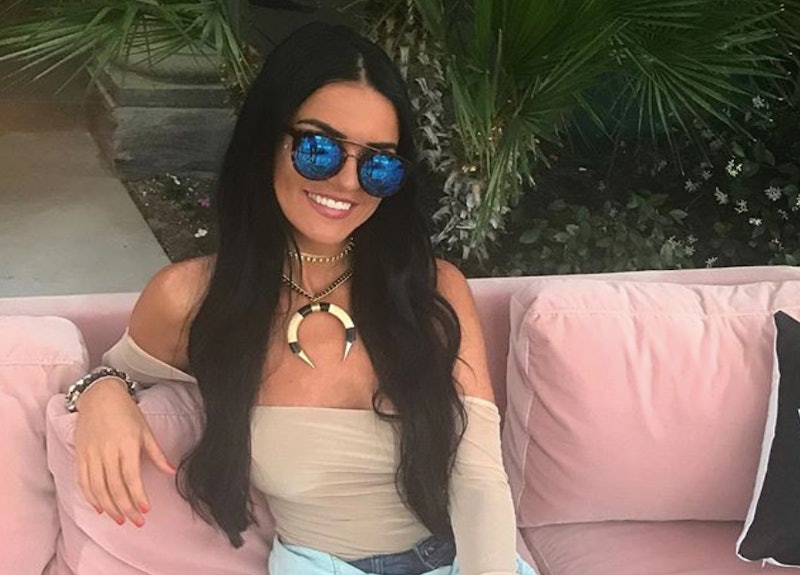 After competing on Nick Viall's Bachelor season and finding love on Bachelor in Paradise Season 4, Raven Gates knows this franchise inside and out, and she's dishing all to Bustle. Now, read what Raven has to say about Arie's Bachelor season.

Let's be real, us fans of The Bachelor may all be romantics at heart, but when we're watching the show — we love the drama too. That is nothing to be ashamed of, it is reality TV after all. Drama is what this world is all about. And, no one brings the drama better than a "villain." Whether they cast themselves as the role, or the other contestants on the show do, everyone loves to hate the villain. So, who is The Bachelor villain of Arie's season? That's what I'm here to help you figure out, because it might not be who you think it is. (And here you were thinking this show was about Arie finding love...)

Now that the first episode and the limo entrances and first impressions are over, the second episode really gives us a chance to see more of each contestant's personality. This is usually when the villain magically appears. So, let's start with the first date.

Holy moly. Talk about wining and dining a girl! Arie started the day off by hopping on a motorcycle and whisking Becca away from the mansion. No big deal. Then Becca got to meet Rachel Zoe and play dress up? I DIE. When Arie whipped out some diamonds from Neil Lane, it was hard to imagine who wouldn't be jealous that Becca landed this date. I mean, walking back into that house all decked out in Rachel Zoe, diamonds, and red bottoms? Tensions had to be flaring. (Side note, how did Becca even balance in those Louboutins with all those bags in hand? Skills.) All of this could put a target on Becca’s back, but does this make her an enemy to all the women in the house? Time will tell, but so far the other ladies managed to try to be happy for her.

The night portion of Becca’s date had me tearing up. Having a dad battle cancer is one that hits home for me. I felt her vulnerability, but she stayed strong telling her story. She also shared how she wasn’t going to settle for just any ole guy! She wanted her person. It was clear to me that Becca knows her worth! And apparently Arie did, too, judging from their hot kiss and undeniable chemistry. Cue the gold confetti, because she got the date rose.

Becca will be the envy of the house, because who doesn’t envy the first one to get a one-on-one? Will she be competition for Arie's heart? Definitely, but because he likes her, not because she demands his time. She's super sweet, genuine, and definitely not a villain.

Let’s move on to Krystal, because you might disagree with me here. Another one-on-one date had Arie meeting the parents with Krystal. First date, taking her home... this mirrors my date with Nick! (We all know how that ended up for me.) But, this tells us that Arie likes her enough to bring home to Momma. Sharing a look into Arie’s childhood with the photo album and home videos was so adorable. Krystal also shared how important family was to her, because she didn’t have a stable childhood. That's when Arie said he hoped he could give Krystal stability. SKrrrttt. Slow down, racecar driver. This is only the first date!

Right now, I’m loving Krystal… but the episode isn’t over. Between Becca’s story, and now Krystal’s... it's hard to love-to-hate either of them, especially after they opened up like that. This is national TV, that's hard to do.

Thank God For The Group Date

The lovey-dovey stuff is fun, but bring on the drama! On group dates, the contestants' true colors really start to show. At this point I’m grabbing my popcorn because there’s got to be a villain in here somewhere... right?

The demolition derby is perfect for bringing out the ladies' competitive sides. But, who knew it would be a real nightmare come to life for Annaliese? I’m going to go ahead and say she’s not the villain. I was hoping for more crap talking and tempers flaring, but we didn’t get any of that. Seinne won the derby, but TBH, I think she's winning every day just waking up looking like that. (Also, did I mention that she went to Yale?) Like I said, a winner, but definitely not a villain.

It was all fun and games until the night portion of group dates. That's when there is more time to drink — or just more time to be somewhere between beginning to panic about getting a rose and being drunk enough you just don’t care. (There is a fine line, trust me!) Between Chelsea stealing Arie, and Bekah’s hot kiss with him, Bibiana was about to lose her mind. Chelsea ruffled a few feathers by stealing Arie first, but that’s what they’re all there for, right? Tensions on the night portion of the group date were running high, but I still wasn't ready to call anyone a villain yet. I needed a rose ceremony, or, rather, I needed...

By now, I haven’t heard half of these girls talk yet, so I'm thinking that maybe I’m overlooking the villain of this season. However, Bibiana is super feisty and I think, in her mind, the enemy lines have been drawn. One thing’s for sure, Krystal is not here to mess around. Even with a rose and a one-on-one date, Krystal was out to steal more time with Arie.

While I don’t blame Krystal too much for talking to Arie once when she already had a rose, to go back over and over? That’s enough Krystal. Still, as annoying as this was for the other women, Krystal is not the villain. Sure, it’s never cool to “double-dip” (meaning going back to talk to the Bachelor when you’ve already had a turn), but this is the name of the game! Arie is there to find a wife, and extra time could help someone.

But, did anyone else notice Krystal telling Chelsea that she was going to get more time, and Chelsea was all like, "Yeah! Totally!” Um, did she not just get chewed out by the ladies on the group date for taking up too much time? Is this Chelsea sabotaging Krystal? Was she setting her up for the other girls to hate? Ah ha! I sense the beginnings of a villain… Though, that alone isn't quite enough evidence.

As the night progressed and Bibiana finally got to talk to Arie — and I'm just waiting to see if she is going to be the real villain. But, when Arie asks her, "Ask me something" — crickets. So, Arie started talking about his dog — which is a great topic — but, Bibs, you had yourself so worked up and agitated that when you finally got to talk to him, you blanked! To make matters worse, there was another interruption... from KRYSTAL! Oh my gaw, Krystal. You’re one interruption away from me making you a villain… (just kidding… but foreal though.)

This set Bibiana off. She told Krystal to “check herself” and gave her a big ole “MIC DROP” after telling her that no one will respect her time.

Fiesty, Bibs, fiesty. But, be that as it may, I believe in my heart that you're not a villain either. You just got (justifiably) mad about one frustrating aspect of the show — there just isn't enough time for everyone, and everyone is fighting tooth and nail to stay.

So, the rose ceremony came to an end and we’re still left with the question of which one of these contestants aren't here for the "right reasons?" It's hard when we really haven’t gotten to hear half of them talk. I'm sure the Twitter world will be giving the villain card to Chelsea, but I’m not ready for that. I guess we’ll have to see what next week brings. In the meantime...

Will the real Bachelor villain please stand up?