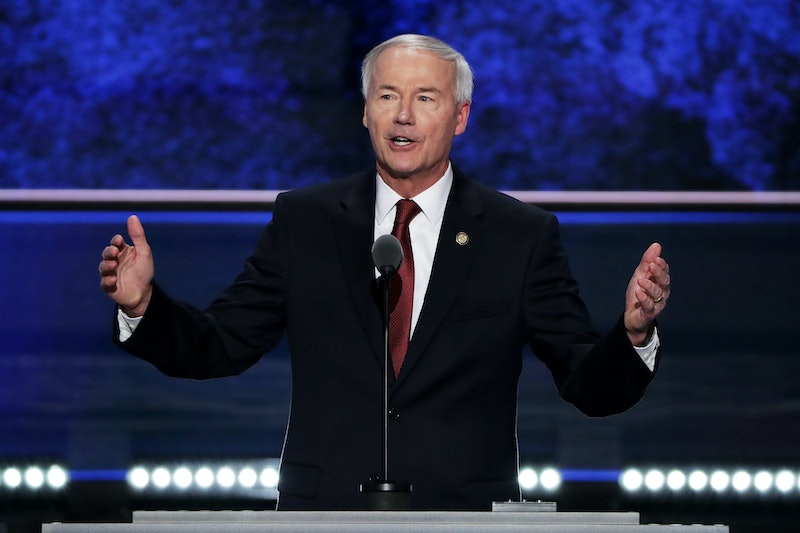 According to a report from the Center for Reproductive Rights, the state of Arkansas' Republican governor, Asa Hutchinson, just signed an anti-abortion law that forces doctors to investigate their patients, opening up medical records of past pregnancies to scrutiny.

That's not the advertised intent of the bill, to be clear, although that will by necessity be its effect. According to the text of House Bill 1434, which Hutchinson signed into law on Wednesday, its intention is to prohibit "sex discrimination" by abortion ― in other words, to prevent sex-selective abortions, in which a mother chooses to terminate a pregnancy because of the fetus' biological sex.

Like so many other anti-abortion laws that have been passed or proposed, however, what's being presented as a change to impact a very particular issue (a potentially unconstitutional change, as women's reproductive rights were ensured by the 1973 Roe v. Wade Supreme Court ruling) will almost unavoidably impact and constrict women's access to prompt, nonjudgmental abortion services.

On the contrary, women seeking abortions in Arkansas will be treated as potential criminals simply for knowing their fetus' sex. According to the text of the bill, any doctor faced with a patient seeking an abortion must first ask whether they're aware of the biological sex of the fetus. If they say yes, then the doctor must inform them that it's illegal to terminate a pregnancy over the sex, and may not perform the abortion without requesting the patient's full pregnancy history and spending "reasonable time and effort" to obtain it. Here's the precise language in the bill, which is slated to go into effect on Jan. 1, 2018:

Hutchinson's freshly signed law imposes a criminal penalty for doctors who fail to comply, with a violation being a Class A misdemeanor. It would also open doctors up to professional consequences, including the stripping of their medical license.

A physician or other person who knowingly violates this subchapter is liable for damages and shall have his or her medical license suspended or revoked as applicable.

In other words, if you're a woman in Arkansas seeking an abortion, it could be for the best that you not know your fetus' biological sex beforehand. Because if you do, your doctor will be legally required to investigate your medical history.

Of course, given that Arkansas also has a mandatory ultrasound law, there are clearly some conflicting policies at play. Unless, of course, the real purpose is simply to stifle abortion access as much as possible, however possible, regardless of the specific reasoning. And when you see what's happening in GOP-run states throughout the country, it's painfully easy to arrive at that conclusion.