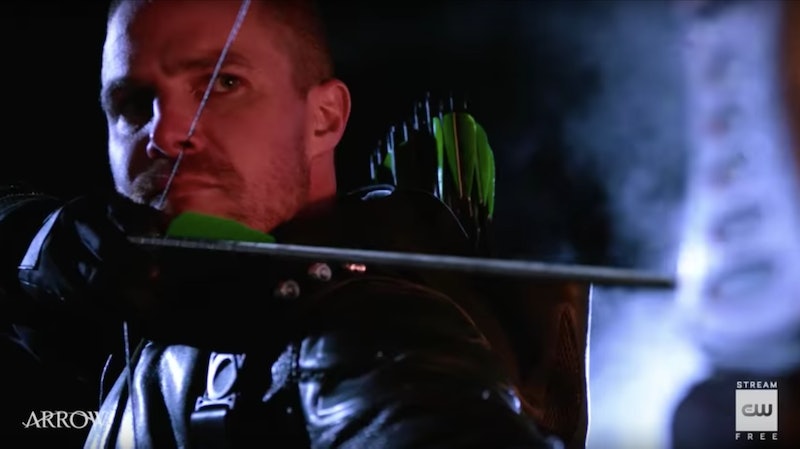 After 8 seasons on air, DC Comics longest-running series, Arrow, is coming to an end, according to Variety. The outlet notes that the show, which was greenlit for an eighth season earlier this year, will conclude after airing its last 10 episodes during the 2019-2020 season. The decision appears to have been made on the premise of going out while on top. Variety notes that the show, which debuted on The CW in 2012, continues to remain one of the network’s highest-rated shows. It was not only was it a standalone success, but also helped spawn a series of other shows for the DC universe including The Flash, Supergirl and Legends of Tomorrow.

On Wednesday, March 6, executive producers Greg Berlanti, Marc Guggenheim, and Beth Schwartz released a statement regarding the decision to end the series. The announcement, which was shared by The Hollywood Reporter, read:

“This was a difficult decision to come to, but like every hard decision we’ve made for the past seven years, it was with the best interests of Arrow in mind. We’re heartened by the fact that Arrow has birthed an entire universe of shows that will continue on for many years to come. We’re excited about crafting a conclusion that honors the show, its characters and its legacy and are grateful to all the writers, producers, actors, and — more importantly — the incredible crew that has sustained us and the show for over seven years.”

It's unclear why the show is concluding things with an abbreviated season since all of its previous installments have consisted of 23 episodes. However, viewers should remain hopeful to see resolutions of their favorite storylines since the show has planned to end on its own terms.

As many of the show's fans continue to let the shock of its cancellation settle in, the show's titular star Stephen Amell took to Twitter to make his own announcement, telling his followers:

"Playing Oliver Queen has been the greatest professional experience of my life... but you can’t be a vigilante forever. Arrow will return for a final run of 10 episodes this Fall. There’s so much to say... for now I just want to say thank you."

Colton Haynes, who played Arsenal of the show also shared his thoughts on social media, writing:

"Sad to say that #Arrow will be coming to an end after a 10 episode Season 8. Thank you to all the fans who’ve watched. It’s been such a blessing to be a part of this incredible show. What a beautiful journey"

Meanwhile, David Ramsey, the actor who portrayed Spartan on the series, took a moment to thank fans of the show. On Twitter, he wrote:

"What an awesome ride! @arrow fans have been the best any actor could've asked for! Thank you for helping me bring John Diggle/Spartan to life!!! Love all of you! Can't wait for you to see what we have in stock for you. Let's end on a high, shall we?"

After catching wind of the news, many of the show's faithful viewers also flooded Twitter, sharing how much they're going to miss the series when it comes to and end.

This fan is just not ready to let go.

2. Holding Onto Hope For The Future

Although this commenter is sad to see the show go, they are keeping their fingers crossed on seeing the characters on some of DC's other shows.

Someone recounts how they began watching and shares that they will "miss it dearly" when it ends.

One fan reveals that they're not "ready to say goodbye" just yet.

Another person was very emotional about the show's ending, revealing how much it had become part of their life.

It seems that no one is ready for Arrow end, but with the forces of the DC universe stretching into other series, there's a good chance that this won't be the last fans see of their favorite characters from the show.

More like this
Stephen Graham’s Wife Plays A Vital Role In His Career
By Emma Madden and Sophie McEvoy
Gabby & Rachel Reveal How That 'Bachelorette' Rose Ceremony Twist Happened
By Grace Wehniainen
Everything To Know About 'RHOC' Season 17
By Brad Witter and Sophia Moore
Does 'Locke & Key’s Ending Mean There Could Be A Season 4?
By Sophia Moore
Get Even More From Bustle — Sign Up For The Newsletter