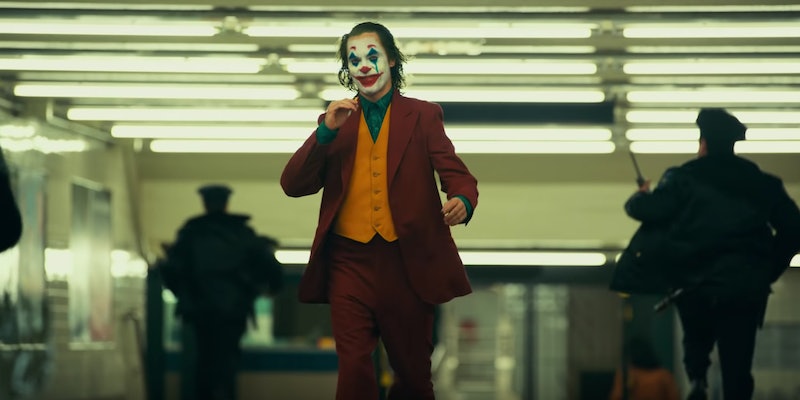 Comic fans might feel like they missed something watching Joker, out Oct. 4, the latest cinematic take on Batman's clown nemesis. The film follows the slow metamorphosis of reticent clown and comedian wannabe Arthur Fleck (Joaquin Phoenix) into the chaos-inspiring killer, the Joker. Fans who've followed every alternate-Earth comic book version of the Caped Crusader will scratch their heads wondering where this alter-ego appeared. But the fact is that Arthur Fleck isn't in the Batman comics, as director and writer Todd Phillips wanted to keep the film grounded in reality.

The film is set in Gotham City, a thinly-veiled New York substitute, in what looks like the late '70s and early '80s. That setting already distances it from other DCEU films, which, with the exception of Wonder Woman are set in present day. As Phillips told a group of journalists, per io9, that separation was intentional. "When we pitched it to Warner Bros and handed the script in, [we wanted to] make it clear, this isn’t f*cking with anything you have going on. This is like a separate universe, so much so that it takes place in the past, before everything else," he explained.

He also cited that era's character-driven films as both reason and inspiration. "The movie, in every way, tries to be grounded in reality as much as possible,” he said, placing Joker closer to films like 1976's Taxi Driver and 1983's The King of Comedy than it is to last year's Aquaman.

The emphasis on realism vs. the weight of fan expectations — the Joker has appeared in over 2,000 comics and has been well-covered in films, television, animation, and games too — made it a natural choice to craft an entirely new character who would slowly move towards this film's version of the Joker, skirting the burden of previous iterations. "It’s just another interpretation, like people do interpretations of Macbeth," Phillips told The New York Times.

Per Slash Film, Phillips confirmed in a Q&A after an early screening that Fleck isn't any version of the Joker comic fans are familiar with. "We kind of picked and chose what we liked from the kind of 80-year canon of Joker," Phillips said. "I guess a big part of what interested me about [making a Joker movie] more than making a movie called Arthur was to kind of deconstruct the comic book movie a little bit."

Those few things that Phillips and his team mined from more traditional takes on the Joker seem, on the surface, to start with his iconic outfit. In the film, it's based partly on Fleck's clowning costume, particularly his green wig, and fits the '70s style. But it's a clear ringer for Golden Age comic Joker's look (which itself was inspired by Conrad Veidt in The Man Who Laughs).

There's also the matter of the Joker's most famous nemesis. Brett Cullen plays Bruce's father, Thomas Wayne. The elder is the closest thing the film has to a villain — a wealthy politician who serves his own peers and passes measures actively hurting Gotham's less-fortunate citizens. Young Bruce also makes an appearance, played by Dante Pereira-Olso. But this plot point was apparently a hindrance to the movie's star.

“[Phoenix] never liked saying the name 'Thomas Wayne,' Phillips said to The Times of his lead actor. "It would have been easier for him if the movie... had nothing to do with any of that stuff.”

Regardless, fans will get the Wayne/Joker connection they're likely looking for... and the Batman origin story they expect.

Fleck doesn't appear in the comics, but Joker sets out to prove that there are still new angles on characters we think we know inside and out. Joaquin Phoenix's committed performance and the film's dedication to period-accurate settings and style make Arthur Fleck a character who stands on his own long before he takes on the iconic name.

More like this
Everything To Know About 'The Hunger Games' Prequel Movie
By Grace Wehniainen and Radhika Menon
Here’s When 'She-Hulk' Takes Place In The MCU
By Brad Witter
How Marvel’s 'She-Hulk' Changes Her Comic Book Origin Story
By Brad Witter
The 'PLL: Original Sin' Season Finale Finally Revealed A’s Identity
By Alyssa Lapid and Kadin Burnett
Get Even More From Bustle — Sign Up For The Newsletter