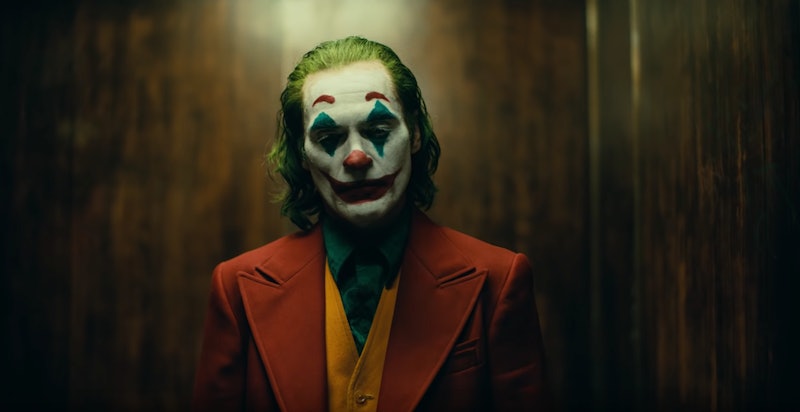 He might want you to put on a happy face, but it's hard to feel anything but terror when you see the Joker come to life. On Wednesday, April 3, the first teaser dropped, and the Joker trailer showcases Joaquin Phoenix's creepy new take on Gotham City's most iconic super villain. It's safe to say that, based on the short clip, fans will never see clowns the same way again.

Set to the famous Charlie Chaplin song, "Smile," the clip follows the character's journey from a lonely man, who takes care of his aging mother, played by Frances Conroy, and works as a clown, to one of the comic world's most unforgettable monsters, who only wants to watch the world burn. "My mother always tells me to smile and put on a happy face," Phoenix's Joker says in a voice over at the beginning of the trailer. "She told me I had a purpose: to bring laughter and joy to the world. Is it just me, or is it getting crazier out there?"

The clip contrasts those shots with images of Arthur Fleck — as he's known pre-villany — being beaten up by criminals who steal the sign he's flipping for work before abandoning him, crying in an alley. Throughout the trailer, Arthur is seen being attacked multiple times by various people in Gotham City, before seeming to embrace his new identity by dying his hair and rocking his iconic Joker makeup. In a nod to the character's signature move of using clown masks to hide his identity — and the identity of his henchmen — Arthur is seen escaping a train and throwing out a clown mask while a voiceover asks, "What kind of coward would do something that cold-blooded? Someone who hides behind a mask."

According to a Warner Bros. press release from September, the Todd Phillips-directed movie will follow Arthur, "a man disregarded by society" who dreams of being a stand-up comedian. "Joker centers around the iconic arch nemesis and is an original, standalone story not seen before on the big screen," the release stated, describing the upcoming film as "not only a gritty character study, but also a broader cautionary tale." That origin story seems to borrow from Alan Moore's famous 1988 graphic novel, The Killing Joke, which featured the Joker as a failed comedian who turned to a life of crime in order to support his sick wife.

While the trailer didn't seem to imply anything about Arthur's love life — other than a few quick shots of Zazie Beetz, who plays a single mother that reportedly peaks the future villain's interest — there are several moments that highlight Arthur's connection to comedy. In one scene, he is seen laughing uproariously in a nearly empty comedy club, and in another seemingly post-transformation scene, he is shown preparing to perform on a talk show hosted by Robert De Niro's mysterious character.

In addition to Arthur's comedic dreams, Joker appears to establish a connection to the infamous Arkham Asylum. As well as several shots of Arthur speaking to a therapist and arriving in Arkham Hospital, early in the trailer, the character is seen writing jokes at his kitchen table about living with mental illness. "The worst thing about having a mental illness," the bottom of the pad reads, "is people expect you to behave as if you don't."

Though the Joker trailer is packed with plenty of haunting images of the villain's origins and Easter Eggs for eagle-eyed Batman fans to notice upon rewatch, one person who doesn't seem to be present is Thomas Wayne, who will reportedly play a major role in Arthur's story. In September, Brett Cullen was announced to be playing the role of Bruce Wayne's father, though, according to ComicBook.com, this version of the Wayne family patriarch will be a much more menacing interpretation than fans have seen before. (And yes, a young Bruce will also make an appearance in Joker.)

The film's new interpretations of the iconic D.C. character seemed to line up with Phoenix's description of Joker as something "unique." In an interview with Collider in July, the Oscar nominee explained, "I wouldn’t quite classify this as like any genre. I wouldn’t say it’s a superhero movie, or a studio movie or a … It feels unique."

"I think, underneath the excitement of these films, and the size of them, there are these incredible characters that are dealing with real life struggles," Phoenix continued. "And sometimes that is uncovered and exposed, and sometimes it isn’t, and so I always felt, like, there were characters in comics that were really interesting and deserve the opportunity to be kind of studied."

Though fans will have to wait until October to see exactly what kind of spin Joker puts on the iconic super villain, there's still plenty of excitement and hidden secrets to uncover in the trailer alone. Just be careful: you'll never be able to hear "Smile" again without getting chills.