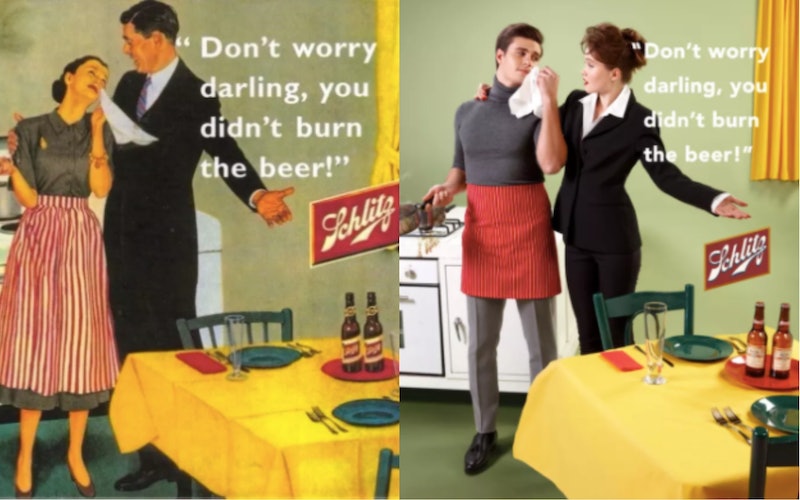 Vintage advertisements are certainly not known for their progressive depictions of gender roles. To show just how absurd they would be by today’s standards, visual artist and photographer Eli Rezkallah created a photo series reimagining vintage ads with the gender roles reversed. The results show a world in which men are expected to be subservient, domestic, and exist primarily in the context of the women around them. (If that sounds absurd and wrong...well, yeah, that’s kind of the point.)

Rezkallah tells Bustle over email that an overheard conversation among family members inspired the project. “Last Thanksgiving, I was visiting my family in New Jersey and I overheard my uncles talk about how women are better off cooking, taking care of the kitchen, and fulfilling ‘their womanly duties.’ Although I know that not all men like my uncles think that way I was surprised to learn that some still do.”

While the ads may be 50, 60 years old, Rezkallah believes “that their essence is still present in the folds of today's modern social fabric” and the message they send is not entirely erased from current culture. “So I went on to imagine a parallel universe, where roles are inverted and men are given a taste of their own sexist poison.”

Rezkallah says the response to the project has been overwhelmingly positive. “I'm extremely happy that the message was very well received online and understood by a vast audience,” he says. “My close family and friends are proud and supportive as they share the same values as mine and strongly believe in the message behind the campaign.”

An argument that gets tossed around and used to counter the current cultural conversation on sexism starts with the phrase, “Well, back in my day…” It’s often meant to imply that people have gotten “too sensitive” or that we should afford some leniency to those trying to get a hang of this new fangled world in which it’s not okay to, say, sexually harass a coworker. It’s an excuse Harvey Weinstein gave in his apology statement where he alluded to a time “when all the rules about behavior and workplaces were different.” Rezkallah’s project highlights the flaws in this argument.

A similar project from artist Saint Hoax, pairing actual Trump quotes with vintage ads, caught the internet’s attention last March. In the project entitled “Make America Misogynistic Again,” the recent language Trump has used when speaking about women pair horrifyingly well with the overtly sexist imagery in the mid-century advertisement. Both Rezkallah’s project and the project from Saint Hoax shows how pervasive sexist language and ideology continue to be in our culture, presenting the words and ideas in a way that is difficult to ignore or deny.

“I hope that people who are stuck in stereotypical gender roles imposed by patriarchal societies would be able to visually see the cracks in the limitation that those roles carry through this project,” Rezkallah tells Bustle. Thanks to projects like “In A Parallel Universe,” those cracks in our culture will continue to be exposed.

Rezkallah, who is currently based in Beirut, Lebanon, is also the creative director and founder of Plastik Magazine and Plastik Studios. You can follow Rezkallah on Instagram @elirezkallah and check out more of his work, including this project in its entirety, on his website, elirezkallah.com.

More like this
25 Inspiring Quotes From Black Women To Celebrate Black History Month
By Kyli Rodriguez-Cayro and JR Thorpe
24 History-Making Black Women You Probably Didn't Learn About In School
By Ayana Lage and JR Thorpe
These Artists Are Reimagining Black History Month To Create A Better Future
By Katie Mitchell
Ashamed Of Your Screen Time Stats? Here's How To Change That
By Alexis Morillo
Get Even More From Bustle — Sign Up For The Newsletter
From hair trends to relationship advice, our daily newsletter has everything you need to sound like a person who’s on TikTok, even if you aren’t.