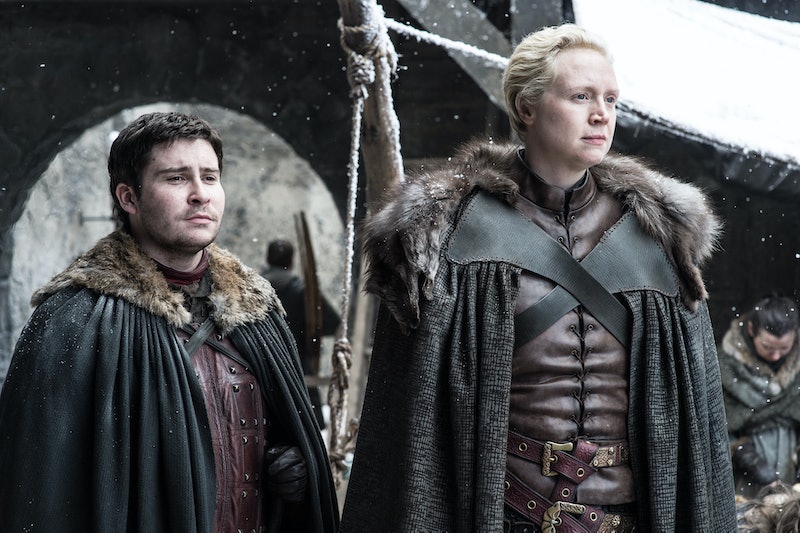 This season of Game Of Thrones has already featured so many reunions and meetings between fan favorite characters, and everybody was excited to see Arya, Sansa, and Bran Stark find each other for the first time since their father died in Season 1. But the Starks weren't the only ones to meet up; in this episode of Game Of Thrones, Arya and Brienne of Tarth reunited for another sword fight, and it was everything fans could have wanted.

A long time ago, back when Catelyn Stark was still alive on Game Of Thrones, she made Brienne of Tarth swear an oath to protect both of her daughters from harm. At the end of Season 4, it seemed like she was so close to making good on that promise when she encountered Arya wandering around with Sandor “The Hound” Clegane. At the time, Arya was clearly excited to see a female warrior, and Brienne seemed happy to see a young girl who had the same penchant for fighting as she does. The two even bonded the names of their swords and how Brienne learned to fight — that is, until she engaged The Hound in combat and Arya fled, not trusting Brienne's intentions.

Now that Arya has returned to Winterfell after his extensive assassin training at Braavos, she's in a much different position than she was when she first met Brienne — in fact, she's basically Brienne's equal now, as she proved in their sparring session. It's also clear from the way she speaks to Brienne about killing The Hound (remember, nobody know's he's still alive yet) that she bears no hard feelings about their present encounter, which is refreshing considering how much beef characters on Game of Thrones tend to have with each other on a good day.

Even the last few lines the two characters share speak to how much Arya's changed in the past three seasons: Brienne asks her, "Who taught you how to fight?" just as Arya asked her in their first meeting. Arya has a more cryptic answer than Brienne did, of course, but ultimately they both approached each other with the same kind of awe and admiration.

For better or worse, the past few seasons of Game Of Thrones have been all about elevating the show's female characters into the same kind of hard-nosed badasses and leaders that their male counterparts are — but very rarely do such warriors get the chance to interact with one another, except on the battlefield. Arya and Brienne's mutual respect for one another as fighters is a rare sight to behold in Westeros, and one that's extremely satisfying to see as a fan of the show. Now both of them can fawn over each other just like I want to fawn over them.