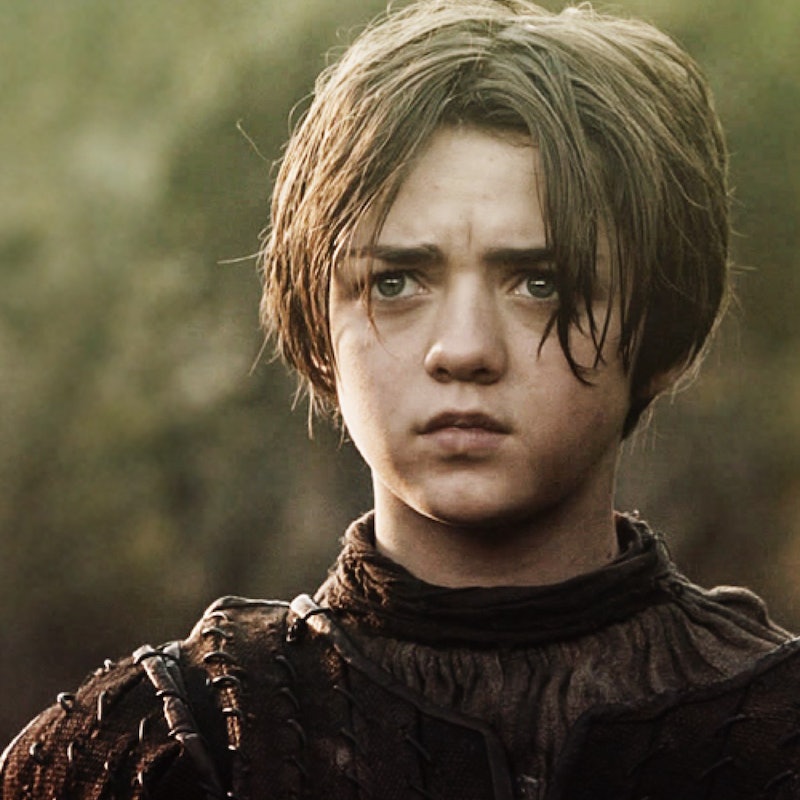 For all of the talk of feminism this season on Game of Thrones , the season finale of Season 4, "The Children," proved that women can call the shots for themselves. Not only that, but young women can chart their own territories. Case in point: that closing shot of Arya Stark. It featured our favorite runaway on the Braavos-bound ship with that glimmer in her eye, giving the character a worthy place in the feminist canon while also solidifying Maisie Williams as a bonafide star.

Of course, it goes without saying that I'll miss The Hound and Arya's Beckett-esque repartee as they wandered through the Riverlands, but now, in the absence of The Hound, Arya has the opportunity to truly be on her own. She doesn't need anyone to protect her. She's smart, savvy, and she knows how to navigate Westeros on her own without anyone's guidance. She got some solid lessons from The Hound's school of hard knocks, but she's long past needing advisors and protectors.

We don't know what's next for her, other than the fact that she's headed towards Braavos, but her story just became that much more interesting because she doesn't have anyone but herself. However, we don't fear for her in the slightest. In fact, it's easy to feel confidence in Arya as she continues her journey to wherever the hell she's headed. Arya standing on that ship alone was the stuff cries of "HELL YEAH!" are made of. It also erased any fears that she was a cold-blooded killer — yes, her survival tactics are grim, but that's how she plays the game of thrones. However, unlike most people in Westeros, she plays them on her own, making her a certifiable badass. And she's a teenager.

But here's the best part: this is the image that the showrunners decided to close out the season with. In a season that included patricide, one of the most epic trials ever, an eye-popping death, a baby that literally got iced by a White Walker, the battle of the century at The Wall, and some seriously creepy skeletons, we weren't left with a terrifying image. Yes, our hearts are in our throats because Tywin Lannister had the worst Father's Day of all time, and we're fearing for Tyrion, but instead of being left with that feeling of dread, we're left with one of the most triumphant images we've seen all season. This image was even more triumphant than Danaerys's crowd surfing moment that closed out Season 3 — we're watching Arya take charge, no matter what she's handed.

If Game of Thrones can close out an epic season with that, then we can't deny that there are some seriously feminist roots to this show. And the coolest part? It's the youngest female character on the show who gets to be the most fiercely independent. Yes, we've got to wait another ten months to see what's in store for these characters, but if that's the image we have to stick with, I'll take it.

You go, Arya. Can't wait to see whose ass you kick in Season 5. (And also, while we're at it, can someone please nominate Maisie Williams for an Emmy?)

More like this
Netflix Shut Down 'Bridgerton' S3 Rumours About A “Very Dark” Storyline
By Bustle
'The Last Of Us' Episode 4 Put Twitter Into An Emotional Spiral
By Alyssa Lapid
Bill & Frank’s 'The Last Of Us' Episode Has Twitter Emotionally Wrecked
By Alyssa Lapid
'The Last Of Us' Has Officially Been Renewed For Season 2
By Darshita Goyal
Get Even More From Bustle — Sign Up For The Newsletter
From hair trends to relationship advice, our daily newsletter has everything you need to sound like a person who’s on TikTok, even if you aren’t.