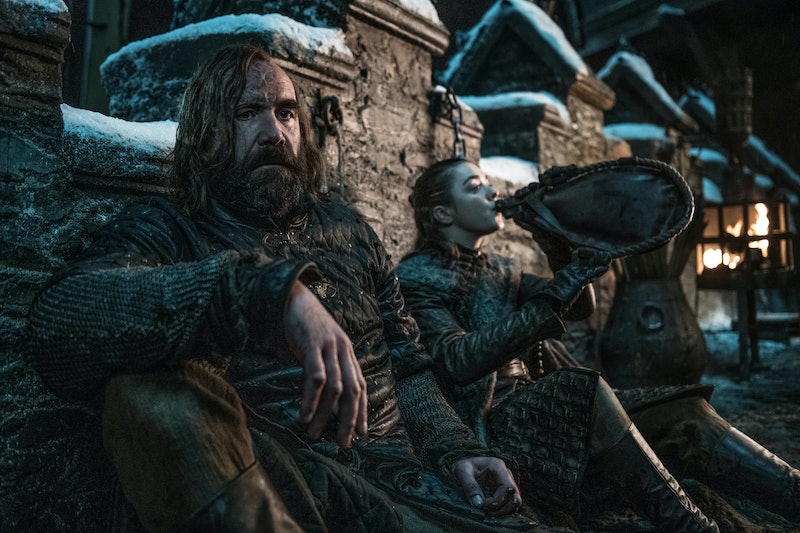 Game of Thrones Season 8 paid homage to the legendary duos that traveled Westeros by foot in the middle seasons of the HBO series. Some of those road trips were sizzling with romantic chemistry, others had sillier antics. Arya and the Hound's funny conversation on Game of Thrones proves they're still a fan favorite pair of grumps, even if they pretend not to care about each other.

Before skipping off to spend the night with Gendry, thus fulfilling slow burn 'shipper dreams everywhere, Arya has a drink and a chat with the Hound on the castle wall. It was a lot nicer than their initial reunion in the Season 8 premiere episode, when he called her a "cold little b*tch," but even that was in good fun. Arya and the Hound may constantly gripe at each other, but they have a mutual respect for one another. Her journey to become "No One" aside, he's one of the only people who really knows what she's been through.

First, Sandor Clegane comments on how quiet Arya is now. This is more apparent to him than it is to fans — we've seen her go through Faceless Man training, and become a silent, emotionless killer. While Arya's been acting much more like herself at Winterfell, and not nearly as much of a robotic weirdo as her brother Bran, she's is still different.

She then questions his motivations. After walking out on Joffrey during the Battle of Blackwater, the Hound has been a free agent. Now he's going into another battle, and fighting for someone other than himself, which Arya points out. "I fought for you, didn't I?" he retorts.

Oh, and Beric Dondarion was there too. At least those worried that Arya would stay true to her kill list and off Beric Dondarrion right off the bat can breath easy. She's got better blacksmiths, err, things to do before the Battle of Winterfell.

"Was he on your list," the Hound asks Arya of Beric — probably hoping to stir up some action now that his alone time has been totally disrupted. "For a little while," she says. Not anymore, it seems.

Would that it were so simple for the two of them to take their adventures to a spin-off. If Game of Thrones ever needed a classic buddy cop pairing, they'd definitely be the ones to call. Neither of them plays by the rules. Both has their own sense of justice and loyalty. There'd be banter for days. What an ideal.

That said, the moment between Arya and the Hound was short-lived. Blame Beric's intrusion if you must, but it's probably for the best that he showed up and she peaced out. As amusing as they are to us, Arya deserves more happiness than the Hound's company can provide.

Hopefully, this wasn't the final goodbye for Arya and the Hound. There's still the whole Battle of Winterfell — and even if both of them don't survive the attack by the army of the dead, they should at least team up on the field for old time's sake. At the very least, it will create some much-needed levity during the horrors to come.