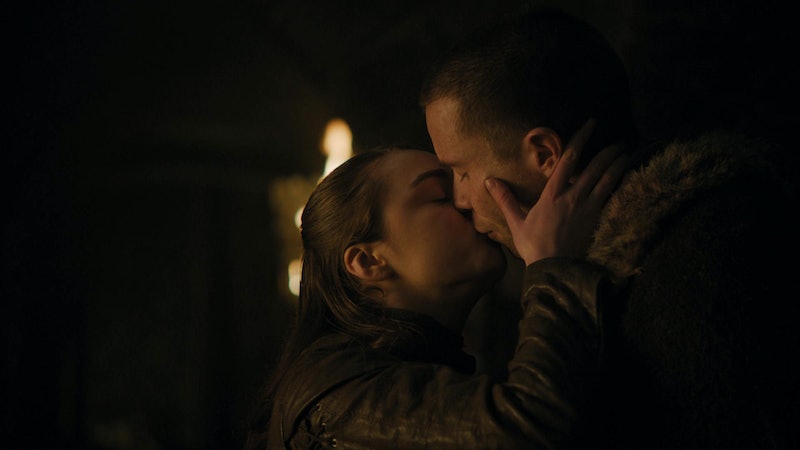 Hearts were broken when Arya told Gendry she couldn't marry him on the May 5 episode of Game of Thrones, but many fans knew that this marriage would just never work, leaving them torn. Now actor Joe Dempsie's response to Arya's rejection of Gendry's proposal on GoT might be the final say on the matter. And let's just say, Dempsie's take might be hard for Arya-Gendry shippers to hear.

In a new interview with Esquire, Dempsie, who plays Gendry, talked about Arya and Gendry's romance on Game of Thrones, which started way back in Season 2 before he was busy row, row, rowing his boat around the Seven Kingdoms. However, when Gendry and Arya finally reunited in the Season 8 premiere, the sparks immediately flew and after one intimate night together, he wanted to put a ring on it. Honestly, we get it, Arya is a fierce queen who took down the Night King.

So after being named Gendry Baratheon, Lord of Storm's End in Episode 4, he decided he needed a Lady and that Lady was Arya. He got down on one knee only to have Arya turn him down gently. "I'm not a lady," she told him. "That's not me." Arya originally said this to her dad Ned Stark in the first season and this callback is a sign that she has always known this about herself.

And Dempsie knows this about her, too. "Gendry just got a bit excited, didn’t he?" the actor joked when speaking with Esquire about the quickie proposal, adding, "And she quite rightly told him where to go. What a stupid question!" Dempsie thinks Gendry got caught up in the moment of being named a lord by Daenerys who's "given him an ability to find a place in the world that I think he’s been searching for his entire life" and lost his head a little. "I think he knows deep down in his heart of hearts there is no way Arya will ever be anyone’s lady," Dempsie said.

Throughout Dempsie's time on the show, fans have bombarded him with questions about the possibility of a romantic relationship between Gendry and Arya, and he "always found that conversation quite uncomfortable at the time, particularly in the early years," he told Esquire. "I was a 25-year-old man being asked whether I would like my character to get together with an at-the-time 14-year-old actress."

Even when Gendry and Arya did get together this season, Dempsie admitted that it did feel a little weird to see Maisie Williams, who is now 22, in this new light. "It was strange for me having known [Williams] since she was 11 or 12 years old and being asked to play out a scene like that," he said, noting that like him, Twitter was conflicted over Arya's sex scene.

"But I found the subsequent conversation actually really quite interesting," Dempsie said of the discussion over Arya's sexuality. "What that scene ended up doing was forcing people to confront their own hypocrisy in a way."

Even Dempsie now has a different take on the scene, seeing it as just the natural progression of life. "That’s something that happens to us all," he said, "we all start off young and then the majority of us start having sex and we’re all perfectly capable to finding that journey out for ourselves."