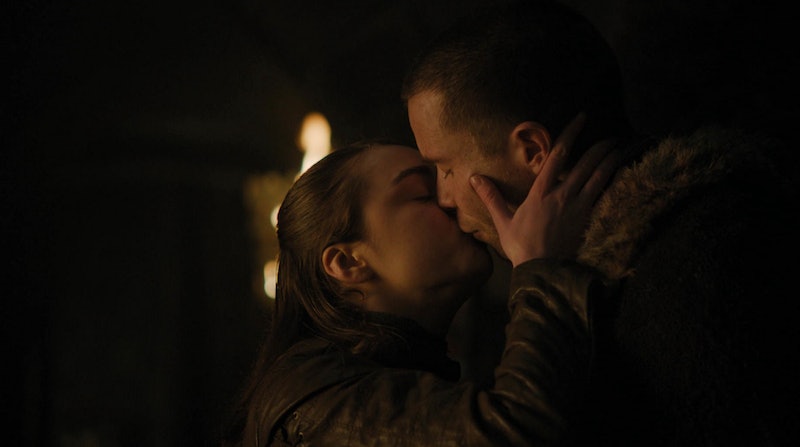 In just a few days, the Night King's minions will descend upon the Avengers of Westeros. It'll probably be devastating. We'll all need a good laugh. Thankfully, Maisie Williams’s reaction to Arya and Gendry's sex scene will give you a laugh. It won't undo whatever happens during the Battle of Winterfell, but it'll remind you of a simpler time when Arya and Gendry were getting it going.

Near the end of Sunday’s episode of Game of Thrones, Arya (Williams) and Gendry (Joe Dempsie) had sex. Some viewers found the scene to be empowering, some found the scene to be sweet, and some found themselves uncomfortable with seeing Arya Stark hook up with someone for the first time. And Williams has a message for viewers who belong to the third category— but do not freak out, this is not like that one time she put Liam Payne on Arya's list. Not yet, anyway.

Two days after Arya's sex scene aired, the actor who has portrayed Arya for about a decade tweeted, “if u feel uncomfortable just know that my mother and my step dad and my 2 sisters and my 4 brothers have all probably watched this too ahahakillmeehehe.” They've probably watched it. She doesn't even know for certain if they all watched it. It sounds like she isn't in any hurry to find out if they've all watched it. That is some #real #family #content.

But do you know who has definitely watched it? Williams's onscreen sister, Sophie Turner. After Sunday's ep, the actor who plays Sansa Stark grabbed a flagon of wine and posted her incredible reaction to the Arya and Gendry scene. Man, we really do not deserve Sophie and Maisie.

As weird as she may feel about her relatives seeing the sex scene, it sounds like actually making the sex scene was a relatively chill time. In a new interview with Entertainment Weekly, Williams admitted that when she initially saw the scene in the script, she figured it was a joke. “I got to the read-through and I’m reading the scene and thought, ‘Oh, we’re actually going to do this,’” she recalled. “‘When do I shoot this? I need to go to the gym.’ A whole list of things.” When it was time to actually shoot the scene, Williams told EW that “everyone was really respectful.” She also noted that showrunners David Benioff and D.B. Weiss handed the reins to the scene to her, telling her she “can show as much or as little” as she wanted. “So I kept myself pretty private,” she said.

Anyway, to anyone who clutched their pearls when they realized Arya Stark was about to sleep with someone for the very first time, please know that the awkwardness that might’ve washed over your body pales in comparison to Williams knowing her whole family will probably see her sex scene at some point. Also? Let Arya liiiiiive. The interaction was consensual, all signs point toward Arya being of consenting age, and it is the final night before the Battle of Winterfell, and who knows how that whole thing will pan out? Let Arya and Gendry liiiiiive! Oh, and let them literally live, too. For the love of Ghost the direwolf, stay out of those dang crypts, you two lovebirds.