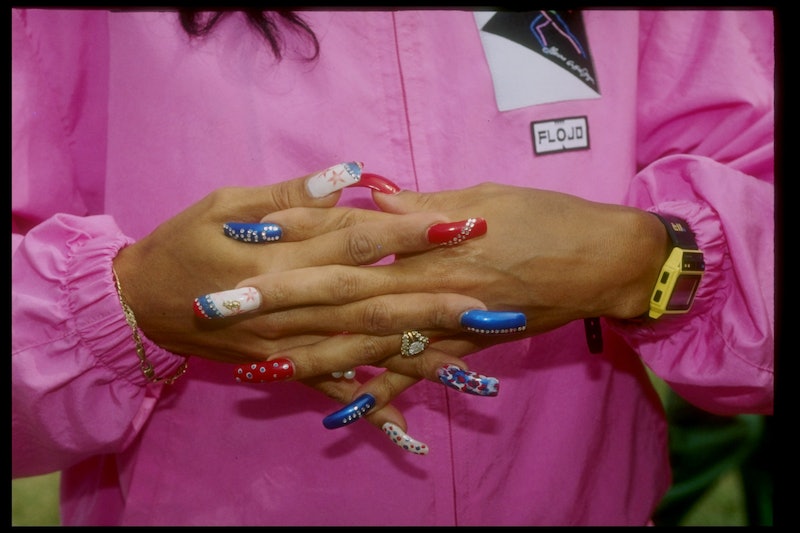 I still remember the first time I got an acrylic nail set. It was for my high school prom, and I'd decided on a short, square French tip with a pink base to accentuate my purple taffeta dress. I loved those French tips, and from that day they became my signature look for years, making an appearance at every special occasion or whenever I had a little extra cash to spend on myself. Eventually though, I started to trade in my former go-to style for some far more edgy, daring looks. Nowadays I'll go for a coffin style shape — long, and usually in a tan or nude color. Or, if I’m feeling spontaneous or going on vacation, I’ll opt for a sharp stiletto, and maybe even slap on a couple of rhinestones on each nail for good measure.

But while some may think of fake nails as just another manicure style, I see acrylics as both an outlet for self-expression and a way to pay homage to the many Black women that I saw flaunting their own bold sets as I grew up. One of these women was my own grandmother, who used to do her own nails right in the comfort of her bedroom. But sadly, just like many other beauty statements popularized by black women, society hasn’t been as open to seeing us positively express ourselves through these nails as it has to our white counterparts.

As a child of the '90s, I remember seeing black women celebrities use acrylics to create some of the hottest trends of the decade. SWV singer Coko, for example, was known for wearing her trademark extra-long set during this era. Janet Jackson arguably popularized the pierced nail look after wearing acrylics with hoops in each nail in the visuals for her 1998 hit “What’s It Gonna Be." But even long before the '90s, fake nails were a part of black women's aesthetic culture. As far back as 3000 BC, Egyptian women were believed to have worn artificial nail extensions made of ivory and bone. Those of royal descent, like Queen Nefertiti, were also known to paint their finger and toenails red, symbolizing their high status in society.

But despite the cultural and historical significance these nails have long held in our community, acrylics are still often labelled as tacky, impractical, or unprofessional when worn by Black women — a stereotype that is rooted both in classist ideals and misogynistic tropes. Yet, these same negative labels are rarely attributed to white women who wear similar styles.

The image of the long, acrylic manicure, covered in extravagant nail art has become tied up in the racist stereotypes often pushed on lower income black communities, Chicago-based nail artist Spifster Sutton tells me. “To an ignorant mindset, acrylics [on a black woman] has almost this sense of the ghetto,” she says, going on to explain that this notion is perpetuated by how black women are depicted in popular culture. “You’ve got the image of your ratchet girl, finger in your face, bubblegum chewing — it kind of has that connotation to it."

These depictions, captured in films like Halle Berry’s 1997 classic B*A*P*S, have helped to cement an association of black woman’s nail style with her income level, her social class — and ultimately, her worth. In the film, Berry plays the role of Nisi, a waitress from Georgia, who with her best friend, wants to open the world’s first combined restaurant and hair salon. Complete with both main characters sporting bold hairdos, gold teeth, and over-the-top outfits and accessories, B*A*P*S leaned into, and then reinforced, every stereotype about lower income African-American women there was — including wearing acrylics.

And while the film premiered after her time on the track, these are the same negative connotations that plagued legendary olympic runner Florence Griffith-Joyner during her prime. Despite being named the fastest woman in the world during the 1988 Olympics, local and international media at the time seemed more focused on criticizing her decadent four-inch nails, than highlighting her extraordinary athletic abilities. And while media scrutiny of her acrylics and overall appearance became a dominant narrative during her historic career, Flo-Jo herself always responded with soft-spoken grace whenever questioned about her style on the track. “I just wanted to bring in my personality and the [stuff] that I wore off the track, onto the track,” she said in a 1992 interview with sports journalist Ann Liguori.

Aside from the larger fact that fake nails have long been popularized by the black community, Flo-Jo had been a nail technician and chose to keep hers long partly as an homage to the side-hustle that paid the bills before she was a world-famous athlete.

The prejudice Flo-Jo faced is still an issue today — and goes far beyond just one’s own appearance. When Grammy-winning rapper Cardi B announced in the summer of 2018 that she had given birth to her first child Kulture, people questioned how she was going to handle changing her daughter's diaper with her trademark pointy, blinged-out talons. She eventually took to Twitter to let critics know she had switched to a far more innocuous square shape, but still faced a barrage of comments, questions, and not-so-subtle suggestions about her mothering skills. And although white celebs like Kylie Jenner was also criticized by commenters for her acrylics after having baby Stormi, the double standard is still evident in the way media outlets immediately came to her defense in the face of the criticism. On top of that, the reality star is generally praised for her long nails, as they're are looked at as stylish — never ghetto.

The critical comments that Cardi received also carry the racist suggestion that her defiance comes from a place of vanity or just sheer irresponsibility. But the reality is that for many black women, getting acrylics is often rooted in something far less trivial and in a lot of cases, way more personally significant. Cardi B has been wearing her long, glittery claws since long before she became famous, and still remains loyal to her New York City-based manicurist Jenny Bui.

Long, acrylic nails are also a visually creative outlet. New York-based nail tech Gracie J, for example, has been using nail art on acrylics as a way to share messages about topics ranging from LGBTQ+ issues to racial inequality. Many of her designs feature images of prominent Black women from icons like Harriet Tubman and Sojourner Truth, to contemporary change-makers like #MeToo founder Tarana Burke. “I don't see myself as an activist, but I see myself as a person that navigates the world as a Black woman,” she shares with me. “So having those experiences allows me to be vocal about similar experiences that other people may be having."

I would go even further and say that today, acrylics are a way to resist stale stereotypes about appearance and presentation that are both baseless and disproportionately harmful to Black women. Aside from the fact that these nails are a part of our history, I like to think that in their own stylish way, acrylics help to push back against the respectability politics that have policed Black women’s appearance for far too long.

When I get acrylics done now, I wear them with a sense of pride, and a feeling of cheeky defiance. I still get the same looks from people though, and it's clear that while they're admiring my nails, they're still likely silently wondering what I do for a living or how I can get anything done with them on. But the difference is now, that pride I wear is not just in my appearance, but in knowing that I carry with me a piece of our culture that is also a badge of honor.

More like this
15 Chrome Nail Polish Colors For An Easy, Mirror-Like Manicure
By Audrey Noble
12 Absolutely Angelic Cherub Tattoo Designs
By Paris Giles
The Body Shop’s New Range Has More Antioxidants Than Retinol
By Justine Knight
The Velvet Nail Trend Brings Cozy Texture To Your Manis
By Jordan Murray
Get Even More From Bustle — Sign Up For The Newsletter