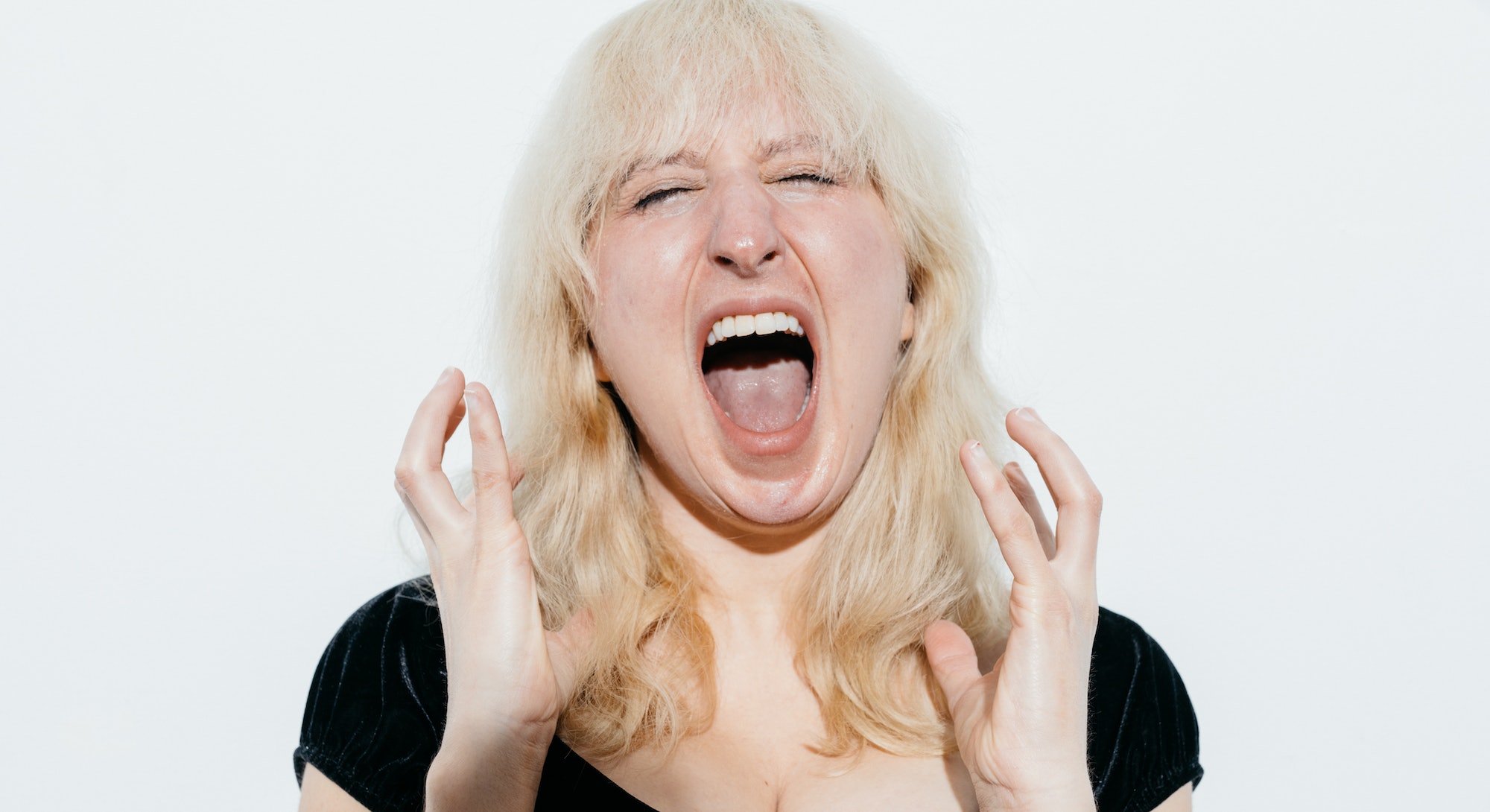 One day last fall, I yelled at a guy who wouldn’t stop talking at the movies. This wasn’t that weird for me; I rarely have a week where I don’t aggressively lecture a stranger about movie theater etiquette, or bus seating protocol, or my extremely strong feelings on check-out line conduct. (I am at Target to find a good deal on frozen waffles, not to experience utter chaos on the conveyor belt, OK?) My angry encounters rarely end when my adversary and I part ways; I'll usually spend a day or two ruminating, thinking of other, meaner things I could have said. This often goes on even after I've forgotten the specifics of what this Very Rude Person actually did. All that sticks in my brain is a fuzzy emotional outline: how good it felt to snap and how much better it would have felt if I had gotten in just one more punch.

Throughout my life, my temper has yielded a variety of responses, none of which even remotely phased me: some people find it annoying and write me off as a "nag" or a "crazy bitch;" some people tell me I'm saying what they wish they could. More than one boyfriend has said that my tendency to fly off the handle is "cute." No one had ever suggested that my rage might be toxic, that it might be destroying my life. I had to wait for Donald Trump to do that.

You’ve probably been reading a lot of stories recently about women and anger: heartening accounts of women connecting with their long-repressed rage after #MeToo and the president pushed them to a breaking point. This isn’t one of those stories. Don’t get me wrong — I’m thrilled to see so much attention paid to women’s anger, especially as a sexual assault survivor myself. Most of the time, American culture at large refuses to believe that women feel anger at all, unless it’s labelling women of color as “angry” for daring to exist, or joking about how female anger is “irrational,” and probably a product of our shadowy and mysterious reproductive systems. So it’s been exciting not just to see female anger acknowledged, but to see women given the time and space to speak about it.

I had always seen my anger as a wild animal that I could either attempt to control or just unleash. I never thought I could try to understand it.

And yet, as happy as I am about all of the coverage, I notice that one kind of anger is the focus of most of it: righteous rage. The type that bubbles up once you realize you’ve been treated abhorrently, abused, demeaned for no reason besides being who you are. This is important, necessary anger, the kind that helps us heal on a personal level and, sometimes, changes the world.

But it's not the only kind of anger women feel. Some women — sometimes even the same women who also feel that righteous, healthy anger — experience the trivial, vindictive kind of anger that makes you leave a Facebook comment you know you’ll regret or start an argument with a random cousin at Thanksgiving. Some women, like me, feel this kind of life-eroding anger all the time: the type that makes you look up at a clock at 6 p.m. and realize you lost a whole day to fixating on some inane fury, or makes your partner hesitant to tell you bad news for fear of watching you sputter with outrage for hours, maybe even days.

In our current examinations of female rage, discussion of this kind of anger remains curiously absent. We're taking the "productive" kind of female anger out of the shadows but still ignoring female anger with no higher purpose — maybe because we still don't know what to do with it.

Instead of just dispatching a simple, elegant "F*** you, buddy!" to someone having a loud phone conversation in a cafe, I now pause and consider how I'm actually feeling.

I signed up for anger management therapy mere days after my encounter with the Movie Talker. While scrolling through Twitter, I came across yet another Trump social media hissy fit. Usually, I feel disgusted and superior when I see our president act out on the internet. But this time the ouroboros of his petty, vengeful rage felt eerily familiar. That's when it hit me: I was this guy. Before, I had believed that Trump's anger was intrinsically male — tied to his "tiny hands" or fear that white men would one day soon no longer hold so much power over everyone else in America. And it is. But I also couldn't deny that I was petty, and vengeful, and every other insult people lobbed at Trump's hair-trigger rage. And all the "Feminist AF" t-shirts in the world couldn't hide it.

I thought therapy would focus mostly on techniques to push back the anger, like you’d see in a movie: visualize a soothing beach, count back from 10 — something that would look funny if Adam Sandler did it. Instead, we started talking about the nature of my anger: What do I get out of yelling? What do I think makes me fly into a rage at a stranger loudly taking a phone call at a coffee shop or acting rudely on the subway? The questions made me so extremely uncomfortable that I started switching my therapist’s space heater on and off just to distract from the tension. I had always seen my anger as a wild animal that I could either attempt to control or just unleash. I never thought I could try to understand it.

And as my therapist and I dug into my past — my quick-to-anger parents, who were unafraid to shriek until they were hoarse, shouting for hours in our basement over god-knows-what; my childhood in a town dotted with restaurants we could never go back to because Mom or Dad got into it there with a waiter (or each other) — I realized there was a lot to understand. I was born into a furious family. I spent my teen years with a barbed tongue and a chip on my shoulder; in college, I'd drink too much and pick fights with girls I thought were "too friendly" with my boyfriend. Today, I act like I'm the universe's hall monitor. But while these phases may have looked different, they were expressions of the same feeling: that rage was the only way to successfully interact with the world. Anger is my first language; everything else feels a little lost in translation.

I don't blame society for my not getting into anger management sooner — that's on no one except me. But I do wonder if it would have taken this long for me to end up there if I was a man.

Anger had been good to me. It had protected me where adults failed, like when I was in middle school and fought back against bullies by tapping into a frightening well of rage. Anger towards my discouraging mother had fueled me when I started becoming a writer. Anger has played a role in so many of my life decisions — where I live, what I do for work, the people I talk to every day of my life — that sometimes, I look at my life, the life I love, and feel like anger gave me all of it.

So when my therapist asked if my anger makes me happy, I was surprised to hear myself saying no. Actually, I realized, my anger makes me miserable. It has damaged countless personal relationships and made it nearly impossible for me to handle any kind of constructive criticism. I used my anger as a cover for all sorts of uncomfortable emotions that I could barely look in the eye: sadness, pain, feelings of worthlessness. I'd learned this technique from my parents, who probably suffered from similar emotional problems as I do: Whenever I felt bad feelings coming up, I just screamed until I distracted myself. But that didn't make those bad feelings go away.

Part of my therapy has involved pausing every time I get angry and thinking about what I am actually feeling. Instead of just dispatching a simple, elegant "F*** you, buddy!" when I see someone act rudely to a coffee shop barista, I now pause and consider how I'm actually feeling, vulnerable and depressed, and probably end up crying onto a bunch of stevia packets. It is, without a doubt, one of the scariest and most unpleasant things I have ever done.

What's going to happen the moment we have angry feelings that aren't so heroic?

But it's also gotten me thinking more deeply about anger in general, and women's anger in particular. I do realize there's a tremendous amount of privilege at work in the fact that my anger is seen as an annoyance by others, rather than a threat. And I don't blame society for my not getting into anger management sooner — that's on no one except me. But I do wonder, if it would have taken this long for me to end up there if I was a man. All of the self-help books I stockpiled after my moment of Trumpian identification were mostly written for men; when women turned up in their pages, they were usually presented as having been pushed to the brink by impossible schedules and burdens. It felt to me like women's anger was being put on a pedestal in those books, the same way it is in so much current coverage about women's rage: it's either justified, or it doesn't exist.

I've been told throughout my life — sometimes as a compliment — that my rage was unusual for a woman. But I don't think that's true. Women feel the full range of emotions, including every flavor of anger, even if society discourages us from expressing them. And that's what gives me pause about many current analyses of women's anger. If we're only extolling the positive changes that women's anger can create, what's going to happen the moment we have angry feelings that aren't so heroic? What happens when we start saying that our anger is more complicated, never all good or all bad?

I realize that admitting that women's rage can sometimes be toxic feels like handing misogynists another tool to cut women down, to say we're irrational and shouldn't be listened to. But I think the alternative — to elevate women's righteous rage without also making space for women to express more complicated anger, or any less palatable feeling — is more dangerous.

We are still being held to an impossible emotional standard. We’re still in the cage.

I worry that the second we take the next step — demanding to be viewed as whole, with the full spectrum of emotions, from righteous rage to pointless rage to sadness to Oprah's-Favorite-Things-level joy — many of the newspapers and policy makers who have been so receptive to our recent anger will back off. I already see it in editorials that claim women are too angry, have gone too far, are mad about the wrong things — as if anger is just a toy that will be taken away from us the second powerful people decide we're misusing it. Saying that women are “allowed” to be open about their anger now — if they’re angry about the right things, if their anger is in service of improving the world, if they’re raging over sexual harassment and assault instead of the millions of small, ridiculous things that make people angry in the moment — means we are still being held to an impossible emotional standard. We’re still in the cage.