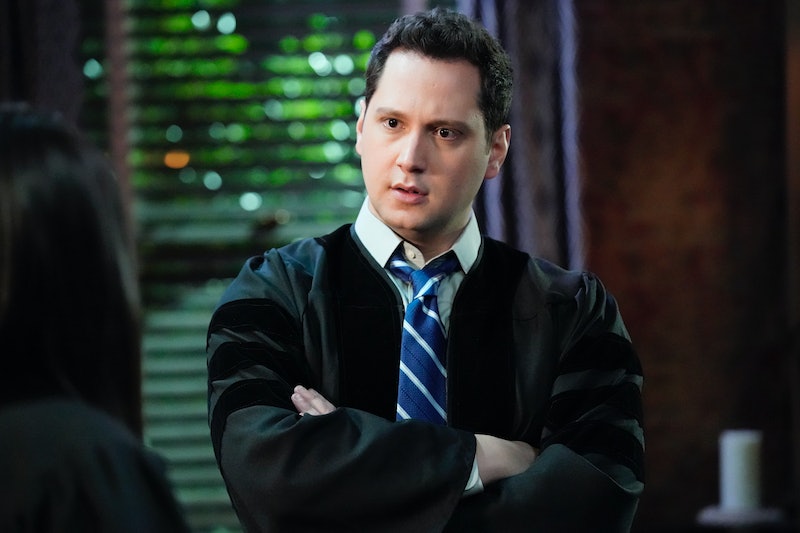 Spoilers for the How To Get Away With Murder Season 6 fall finale. HTGAWM has never been afraid to place even the most beloved characters up on the chopping block, however, Thursday night's fall finale "Are You the Mole?" saw the demise of everyone's favorite frat bro, Asher Millstone, shortly after he was outed as the FBI informant. But if you're hoping this Keating bro will receive the same resurrection treatment as Wes, think again. Matt McGorry tells Bustle that Asher is definitely dead on HTGAWM but that the mystery behind his character's fate is still far from over.

"I can confirm that Asher is deceased," McGorry says. Though when it comes to knowing who exactly this new mystery killer is, the actor is just as much in the dark as viewers. "I don't even know who Asher's killer is," he admits. And unfortunately, the list of suspects is pretty long these days, considering Asher's mole-sized betrayal. In fact, upon learning that he was the informant, Oliver hit Asher over the head with a fire poker. If innocent, sweet Oliver had such a strong reaction to the news, then just imagine how someone like Frank would react if he were to catch wind of Asher's secret.

Then again, McGorry wouldn't rule out the possibility that the killing was more of a group effort than just one specific individual. "Did they just get together and take turns hitting him in the head?" he theorizes. "Anything is possible."

Never fear, though, thanks to the power of flashbacks, Asher will still appear throughout the final six episodes of the show when HTGAWM returns in April. "You'll definitely see more of Asher," McGorry confirms. "Asher is dead as a character, but he is not gone. He will live forever in your hearts, and also, he will continue to be on the show."

But Asher's death wasn't the only thing McGorry had to come to terms with in regards to his character. Discovering that he was the informant left the actor with some mixed feelings on the matter. "You know, I was not surprised entirely," he shares, while adding that "part of me was a little sad about it." Asher's humor has always been a source of some much-needed comic relief on the show, which may have been what made him seem like the least likely culprit to betray the group. (Bros before FBI foes, right?)

Yet, at the end of the day, McGorry felt that the twist "did make sense," given everything Asher had been through with his family. Plus, you know, getting blackmailed by the FBI can be a pretty strong motivator. "I do understand why he did what he did," McGorry says. "It did feel like it was all kind of like tumbling down and I think he was afraid and he's been afraid for a long time and I think really is what ended up getting to him."

With only six episodes to go until the series is over for good, it's only a matter of time before Asher's killer is revealed. Let's just hope that whoever it was won't feel the need to strike again.