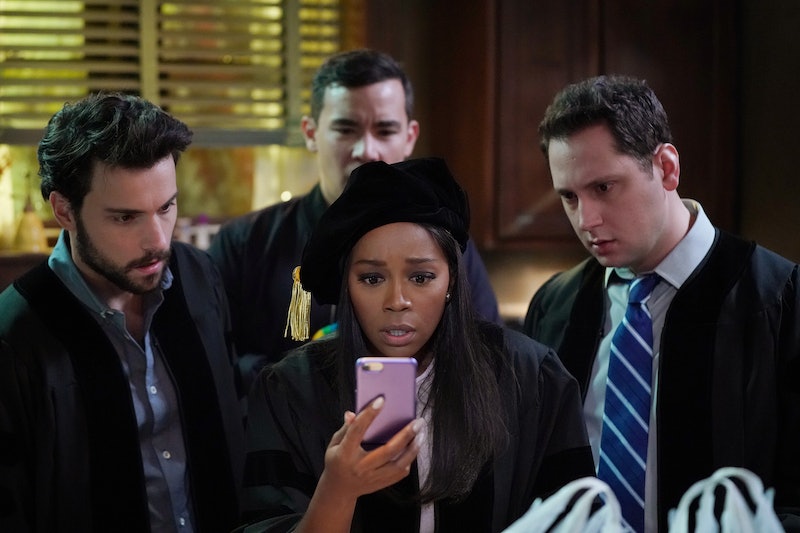 If there's one everyone knows it's that How To Get Away With Murder is all about the epic cliffhangers. That's why Thursday night's midseason finale already has fans desperately wanting to know when HTGAWM Season 6 will return from its winter hiatus. Because while celebrating the holidays is all well and good, the series has left us with some very important questions that deserve to be answered ASAP.

Sadly, that's not going to happen. According to TV Line, ABC is shaking up all the time slots for its Thursday shows after the holidays. On Thursday, Jan. 23, Station 19 and Grey's Anatomy will have a crossover event in the 8 and 9 p.m. ET slots, respectively. (Yes, you read that correctly: Grey's is moving back to its original 9 p.m. time slot.) Which means that Million Little Things will be bumped to the 10 p.m. slot, taking HTGAWM's place. Once that show's second season plays out, Annalise and the Keating 4 will return on Thursdays at 10 p.m. ET on... April 2. Yea, that's almost five months away, so you're going to want to just sit tight and try not think about the Castillo family or any of those confusing flash forwards until then. It's a long wait!

ABC announced back in July that the sixth season of How To Get Away With Murder would be its last, officially bringing the story of Annalise Keating to a close. “Viola Davis made television history with her unforgettable portrayal of iconic female antihero Annalise Keating,” ABC Entertainment president Karey Burke said in a statement at the time of the announcement, as reported by Entertainment Weekly. “I am eternally grateful to her, Pete Nowalk, and Shondaland for creating and bringing to life such a smart, sophisticated, and groundbreaking series that has long been an integral part of Thursday nights on ABC.”

Nowalk had a few words to say on the matter as well, hinting that it made sense for the characters and the storyline to have this journey come to a close. "Deciding to end this series was a brutal decision, but ultimately the story tells you what to do — as it did here,” he explained, adding that "For me, Annalise Keating’s journey has always had a clear ending." That ominous remark probably has something to do with the lead characters alleged death, which has been showcased in the show's iconic flash-forwards.

But when you're dealing with a series like this, nothing is ever as it seems. All fans can do is sit back and see how the rest of the season unfolds when the gang returns at the start of next year.