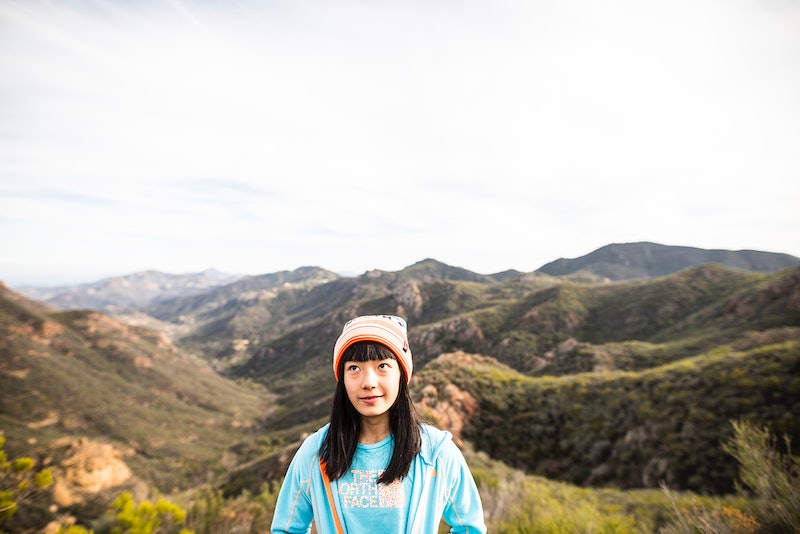 If you're not already amazed by Ashima Shiraishi's climbing prowess, you should be. The 18-year-old The North Face athlete has been smashing climbing records since she was a child, including becoming the first girl or woman to climb a V15 boulder problem. At age 14, she was also the youngest person of any gender to conquer that level of difficulty, all while she was on spring break in Japan. After all that, winning the 2019 USA Climbing’s Bouldering Open National Championships might seem almost mundane. And now, Shiraishi is preparing for the 2020 Tokyo Olympics, setting her sights higher than ever before.

The self-described introvert tells Bustle that taking care of herself is going to be key in preparing for the Summer Olympics next year. While she appreciates the ways that "taking care of other people is really important for your well-being," she's just starting to learn how to assert when she needs her alone time. Socializing is great, she says, but recently, "I noticed I need time for myself. I feed off of being alone and doing things that are therapeutic for me." And as she gets ready to mature away from her climbing prodigy status into the new role of 'adult' in the climbing world, she tells Bustle that "balance and moderation is always key."

But pursuing that personal balance doesn't mean that Shiraishi isn't training harder than ever before. She's recently relocated to Japan from her hometown of New York City, where she started climbing as a child in Central Park and Brooklyn Boulders. Now getting ready for the Tokyo Olympics, Shiraishi is looking forward to competing in her parents' home country while representing her own.

"In Japan, it's going to be a magical, because that's where my second home is," Shiraishi tells Bustle. "And after the United States, it feels like my home. I'll be competing in a place that I could call my other home and being around people that all support me will all be really cool."

And even though she misses the "magnetic" diversity of New York City, she's been making moves in thrift shop scene in between her training sessions in Japan. With her enthusiasm for finding men's and boy's clothes that fit her small body in ways she likes and fashioning them into unique styles, Shiraishi encourages thrifters to "be open" to changing clothes they find to fit their own visions.

Openness and flexibility are not only for fashion though, Shiraishi says. These are qualities that that climbing cultivates in a very real way. "Climbing really allows you to become more open minded," she tells Bustle, " because when you look at climbs, you have to be flexible with it and not have these expectations or a certain mindset for it and seeing that is cool."

Using that expansive mindset and openness to imagine all the things she can accomplish has been especially important for Shiraishi as a young climber who's a woman of color. "When I started," she says, "it was mostly just like white people. And at the gym you didn't really see that many people who were young." But now, she says, the climbing world is starting to change for the better.

And the more time goes on, Shiraishi says, "the more I see people of so many races and different cultures and backgrounds, so many people climbing. And it's so beautiful for me." This kind of beauty in her sport is something that she's hoping to fully embody as an Olympic athlete. And it's definitely going to be amazing to watch.