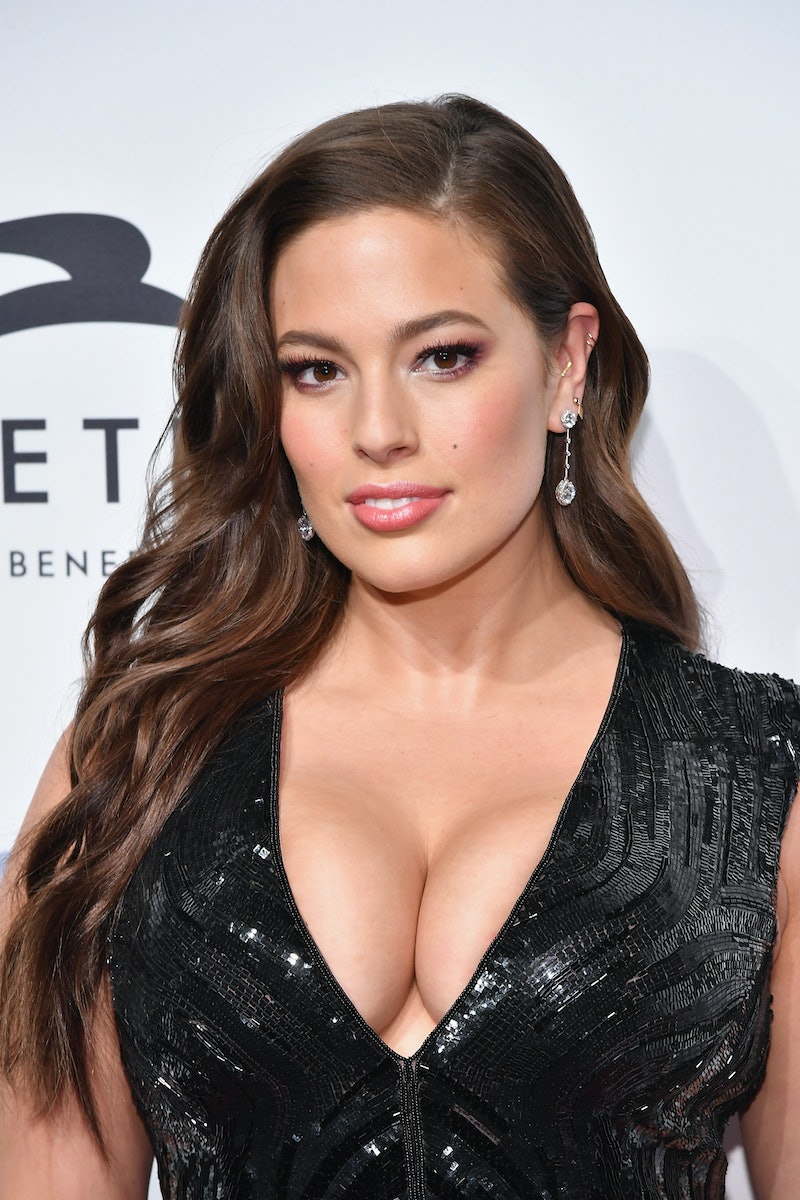 By now, there's a good chance you've heard about Ashley Graham's Vogue cover and the drama that ensued because of it. If not, here's what you missed. Ashley Graham appeared on the cover of American Vogue alongside six straight size models — including Gigi Hadid and Kendall Jenner — and on the cover, each woman is dressed in nearly identical high waisted boy shorts and black turtle necks. On the surface, it appeared as a great moment for the magazine. Having a plus-size model and models of different races gracing the cover seems like a win for inclusivity, right? Unfortunately, things aren't that clear cut, and Graham is now weighing in on the controversy.

What's one of the controversies that erupted over the Vogue cover? Graham's arm is dropped onto the top of her thigh. While this may not have attracted everyone's attention, it's notable that she's the only model without their arm lifted to embrace the model in front of them. The other issue? Some people are arguing that Gigi Hadid's hand looks like it's been digitally altered to extend over Graham's stomach. Seems problematic if the allegations are true, right?

Now, the flurry of conversation has reached social media, and Ashley Graham is using her Instagram to respond to the criticism. After a comment was made regarding Graham being "made" to drop her arm in an Instagram comment, the model responded in a quick comment, "I chose to pose like that...no one told me to do anything."

Graham's concise comment may not be much, but it is definitive. While the cover still deserves its fair share of criticism, fans of Graham's can rest assured that when it comes to that suspicious arm drop, it was all her — we should applaud her for posing however she well damn pleases.

While the model may have cleared up the misconception that the magazine asked her to pose so that her thigh was covered, it doesn't mean that the cover should be lauded as the pinnacle of diversity in fashion.

In terms of body diversity, Vogue's cover just doesn't do the trick. The photograph still features seven traditionally beautiful women with Graham's body being the only one even slightly outside of the typical straight size women commonly found on covers. Readers still see seven stunning women, posed in similar ways, in nearly identical dress with barely any way to tell their bodies apart. The truth is, the cover just doesn't go far enough.

That's the thing about representation. Bodies need to reflect those we see every day. Women who are over a size 16. Women who are under 5'9". Women who have darker skin. Seeing diverse bodies is important, and while the cover is a nice gesture, it's not radical. It's not revolutionary, and it's honestly just not that big of a deal.

While the cover is admittedly exciting for fans of Graham (it marks her incredible impact on the fashion industry) I still find myself waiting. I'm still waiting for the day we see a disabled body, a size 26 body, all bodies on the cover of Vogue.