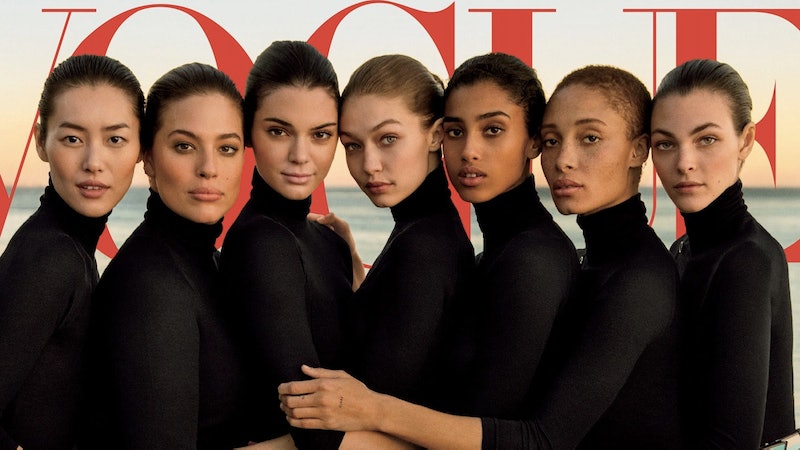 I get it. When someone tells you something is "diverse" and "powerful," you want to believe them. When I saw headlines about the Vogue cover with "diverse" models, representing a "powerful" moment, one strong enough to "break the internet," I wanted it to be true. But it wasn't — and reacting to something as if it's revolutionary when it's not is just as unfortunate as choosing not to push the bar in the first place.

What, exactly, is it about seven gorgeous models, dressed in similar garments, posed in such a way that their bodies look relatively the same, that feels revolutionary? What feels powerful about a group of women with a tremendous (albeit varying) amount of bodily privilege posing for a magazine cover? Is checking ethnicity boxes off while styling and probably editing an image to appear as if all the women are one standard unit really what we're calling diversity? And if the answers to these questions make you uncomfortable, ask yourself this: Why can't we just call it a beautiful cover, and call it a day? When headlines regard the Vogue cover with praise and adulation, they're furthering a narrative that I've grown fundamentally exhausted of: Casting models with an ever-so-slight skew from the norm is enough.

But it's not enough.

The issue I have isn't really with Vogue. I work in the fashion and media industry, and I've made peace with the fact that while I'll always find Vogue visually compelling, I'll never truly identify with the content. I'm a plus-size working class woman who has zero interest in four-figure purchases or what a socialite wore to a party at the Met or who backstabbed who to control a legendary fashion house.

Instead, I prefer my fashion content to come with a healthy dose of democratization, approachability, and inclusivity. There are plenty of publications doing that, but Vogue just isn't one of them, and they aren't trying to be. The Vogue brand has always been about being aspirational, not relatable — that's why it's so disappointing to see them embody the former but be exalted as the latter.

It's important to acknowledge that as little as 10 years ago, it was difficult to find anyone on a magazine cover that wasn't thin, white, beautiful, or all of the above. In certain respects, the industry has made huge strides — in 2007, perhaps, this cover would have been revolutionary. In 2017, it feels pretty gorgeously average — and that's a good thing. It's reassuring that we've reached the point where a cover like this feels tedious and expected. But this can't be our stopping point. We still have a long way to go, and for our part, there's no way to control the editorial decision-making that goes into producing a cover like the one Vogue just released — or any other publication, for that matter.

What we can control, however, is how we react to it. We can refuse to accept the narratives of "power" and "diversity" being force-fed to us and instead praise an image like the Vogue cover for what it actually is: A bunch of high-profile models, carefully orchestrated by a major fashion publication to sell as many issues as possible — and that's OK. Not everything has to be pegged to power and inclusion — in fact, doing so silences the things that actually are.

Instead, focus on sharing and promoting content that is, and doing so overtly — everything from Teen Vogue to Refinery29 to, ahem, Bustle, and even your favorite blogs and social media accounts. There are so many stories that actually push boundaries and break molds that, while they may never get to to cover of Vogue, are definitely worth all those "powerful" headlines.

So, sure: It's always great to see a gorgeous photograph of a group of women (especially knowing that it represents career success and dollar signs for those women) — but that's where praise for the Vogue cover should begin and end. Ultimately, we need to stop settling for headlines that tell us what's powerful, and instead demand the content speak for itself.