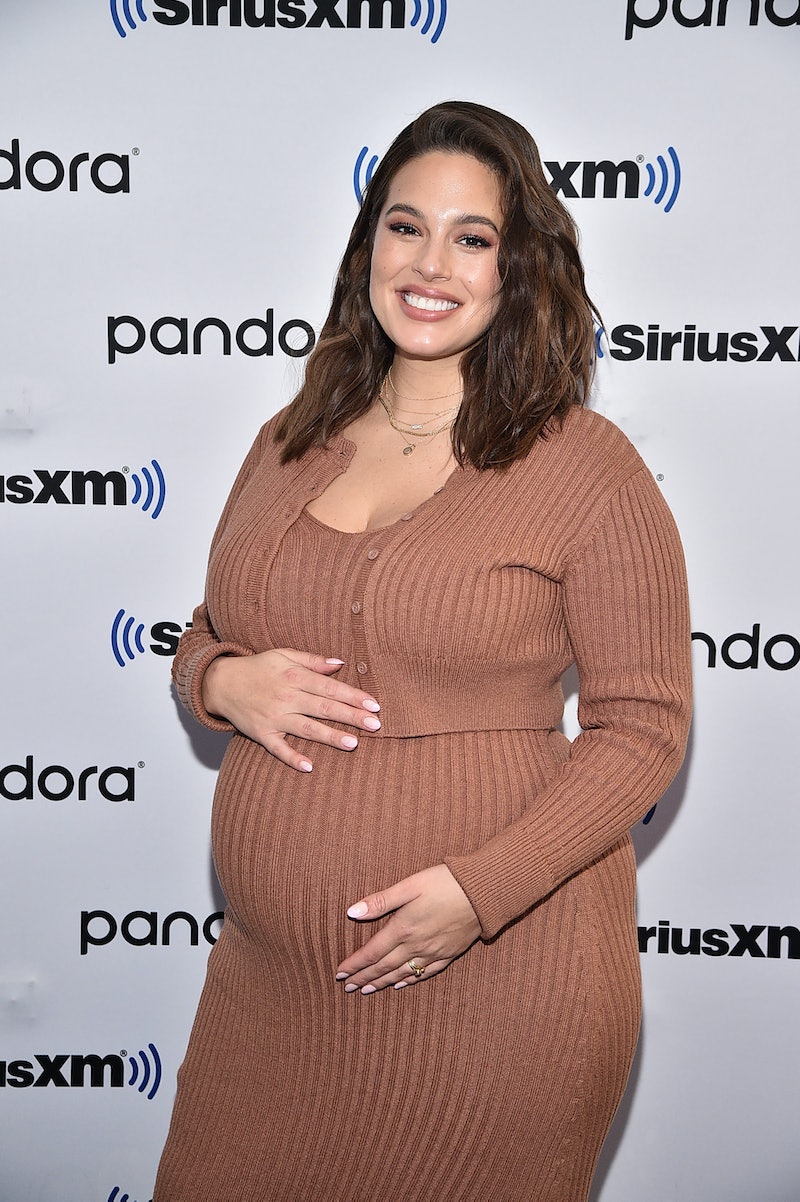 Ashley Graham has seemingly done it all — she's created a swimsuit line, is an ambassador for Revlon, has worked as a television host, and become one of the most recognizable faces in the push for inclusivity. Now, she's got yet another thing to add to her already impressive resume. Ashley Graham's Vogue cover marks the first time that the star has appeared on the magazine solo, and she's doing so while pregnant.

On Dec. 6, Vogue released multiple covers for its January edition with each of the images centering around pregnancy and motherhood. Other cover stars Stella McCartney and Greta Gerwig appear on the magazine with their children while Graham showcases her pregnancy in a billowing, gold metallic Oscar de la Renta gown. With her hair swept back and hands gently cradling her stomach, Graham's cover, shot by famed photographer Annie Leibovitz, is reminiscent of the divine The Birth of Venus.

Graham previously appeared on American Vogue in 2017 when she joined fellow models Gigi Hadid and Kendall Jenner celebrating representations of women the fashion industry. While the cover did undergo criticism, it marked the first time that a plus size model had ever graced the face of the magazine, and now, Graham has returned not just plus but pregnant and all on her own.

Graham took to her Instagram following Vogue's reveal of her cover to celebrate. In her post, the model writes that the cover celebrates, "inclusivity, mothers, pregnancy and love" and is a "surreal" experience. She goes on to add that she has been dreaming about such a cover since she was a model in the Midwest 20 years ago.

Of course, Graham thanks both the magazine and its editor Anna Wintour for the cover as well as allowing her to have such a frank conversation about pregnancy. Graham writes, "Thank you @voguemagazine and #AnnaWintour for embracing a conversation around pregnancy and motherhood, which can be both incredibly exciting and also isolating. The community and support I have discovered along the way has been incredible, and to share this monumental moment with my son and husband in the pages of Vogue could not feel more special."

In her interview with Vogue, Graham discusses her pregnancy and the camaraderie she has found with other mothers, but she also details her rise to fame specifically as it related to her being plus size.

When asked if she has ever attempted to be thinner to fit into the typical standards of a model, Graham explains she has had people tell her to lose weight but says it's not who she is. "I’m a curvy woman—a big-boned, healthy, corn-fed Nebraska girl," she tells Vogue. "It is who I am. And once I accepted that, the more confident I became, and that’s when my career really started to take off."

To say that Graham's career took off, may be an understatement. With her new Vogue cover, a successful podcast, her beauty campaigns, and design work, Graham's career is massive, and we can't wait to see what's next for the soon-to-be mom.