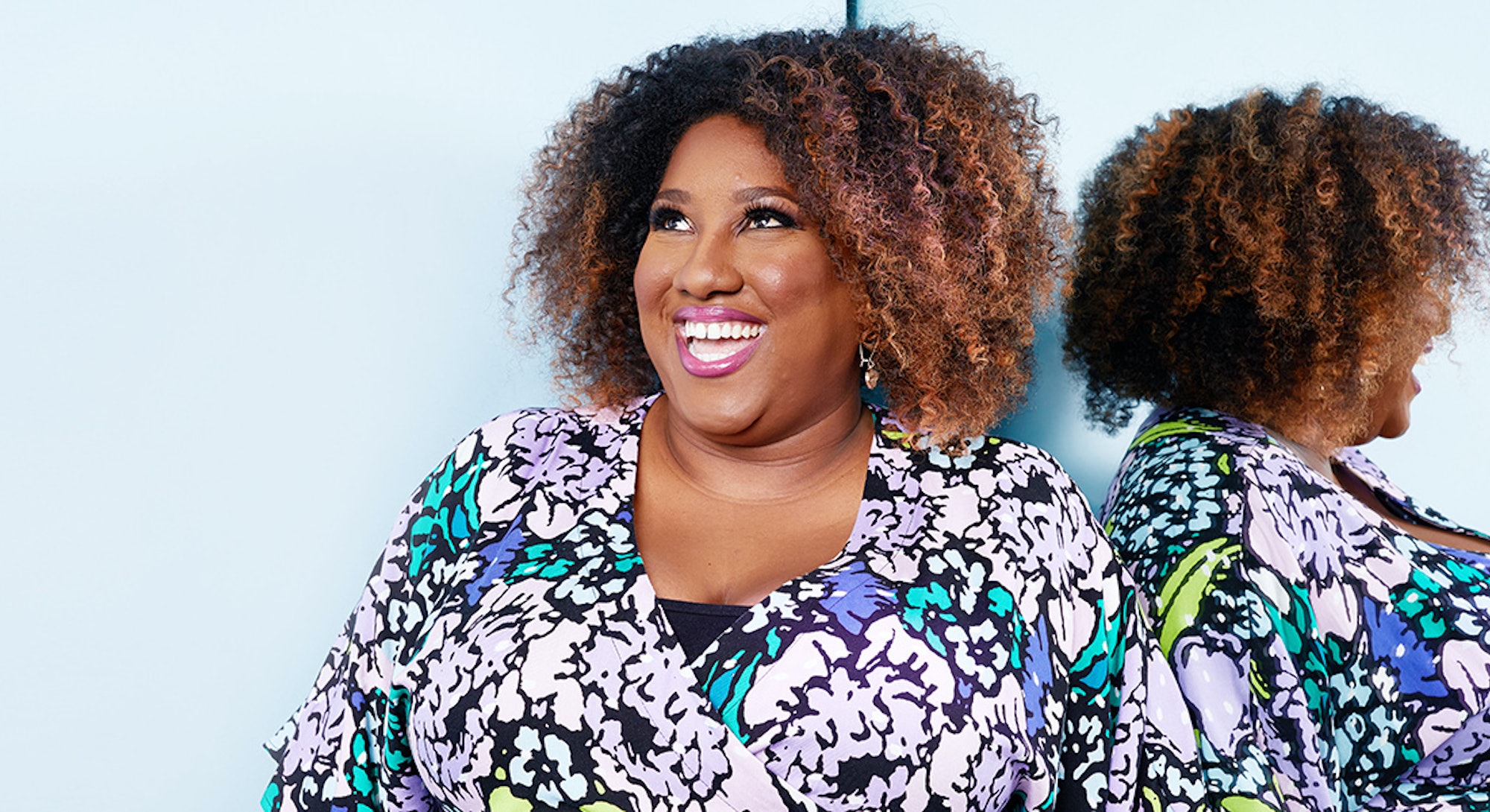 There may be a "liberal echo chamber," but Full Frontal With Samantha Bee correspondent Ashley Nicole Black doesn't spend all her time there. When the NYC-based Second City veteran leaves what the opposition might call her "over-educated, elitist, urban bubble" to host engaging, thoughtful field pieces for TBS's crown jewel late night show, she engages with Americans who have probably never seen Full Frontal about the issues that are currently tearing the country apart. The funny thing is, those pieces aren't entirely about laughing at the other side — they may also be working to bring us closer to understanding and identification with people on the opposite side of the aisle. Jokes can and have been used for evil, but Black — who has been with Full Frontal since its debut — has found that comedy can also make people "human" again.

"...it’s like, 'Oh really, it was only gonna take two minutes to get you to be human about this?' If only I had time to spend two minutes talking to every single person in America."

The example the comedian gives when we sit down after her party-themed photoshoot at Bustle HQ ("I got to play with confetti!" she exclaims) is Full Frontal's "Most Lives Matter" segment from the summer of 2016. Black hit the Republican National Convention with a camera crew and a microphone to see if just one attendee would acknowledge the prolific social justice movement to acknowledge the value of black citizens.

"Like we tried to get people to say 'Black Lives Matter' and every single person started off, 'No, absolutely not, I would never say that,'" Black says, both indignant and amused. "Within two minutes they’re like, 'Well, maybe I’ll Google it. Maybe I’ll look it up. You made some good points.' And it’s like, 'Oh really, it was only gonna take two minutes to get you to be human about this?' If only I had time to spend two minutes talking to every single person in America."

Still, it has to be tough to broach those conversations in the first place. But Black, who left a Northwestern PhD program to pursue comedy, leans on her training when things get hairy.

"You’re improvising and no matter what anyone says to you, your goal is to respond in the moment, respond honestly, and also make somebody laugh," she says. We're sharing a couch in the Bustle green room, and though Black is still humming with energy from posing for our photographer, she settles quickly into teacher-mode when we get to the nitty gritty of comedy. (She also coached improv students at Second City.) "But yeah, it's the human part of me that’s like, 'This person is being mean to me' that kind of has to go away a little bit for the comedian part to be like, 'How do I turn this thing into a joke?'"

And per Black, the kind of man-on-the-street comedy that makes up a big part of Full Frontal is conceived and carried out with the genuine intentions of hearing dissenting voices. It's why the "preaching to the choir" criticism gets under her skin.

"We go out every week and talk to people," she stresses about that liberal comedy trifecta of The Daily Show, Last Week Tonight, and Full Frontal. "Literally sit down for an hour with another human being and talk to them, and I'm like, 'When was the last time you did that?' The [conservative] people who are saying 'liberal echo chamber,' when was the last time you sat down for an hour and interviewed a liberal about what they really thought?"

At this moment in history, stakes are higher than ever in this field. So I ask Black if she feels a duty to be in comedy news right now — if, in her profession, she feels like working on this show is the way she can contribute the most. ("... In the sense that I have a teaspoon and I’m helping to bail out the boat," she offers.) But the broad, sociological implications of the art form mean that Black could still be pushing against boundaries of understanding in a different gig, including returning to her improvisational comedy roots.

"I think, for myself, as a larger black woman, I love doing sketch comedy, because you might see me play 20 different characters in a show. And a lot of times, when people look at my body they see one thing. They see like 'ghetto girl' or 'mammy' or whatever," Black says, without a trace of offense or malice. "So if you see me play 20 different characters, even if I never talk about politics, that just opens up the possibility that this person can be so many different things."

"...in order to laugh at anything I do, you have to identify with me just a little bit, and I think that’s a political act in and of itself."

"I think comedy is the most effective thing to change people’s minds, because the only way you can laugh at something is to have agreed to the premise of the joke," Black explains. "The reason we laugh when people trip and fall is because we’re humans, and we know what it feels like to trip and fall. And we experience a little bit of that feeling watching comedy. So in order to laugh at anything I do, you have to identify with me just a little bit, and I think that’s a political act in and of itself."

After sitting with her for just a few minutes, it's easy to understand how Black manages to draw in even the most resistant conversation partners. She's open and cheerful, but a conspiratorial world-weariness comes through too, like, can you believe we have to talk about this stuff? In an essay for Cosmopolitan, Black described her comedy brand, if you will, as "feminist and upbeat, but with a deep undercurrent of sadness." When I tell her how much I love that line and that every woman I know would probably attest to feeling the same, she laughs knowingly.

"All women are walking around all the time, holding on to dear life," Black says. 'Does anybody like me? Am I OK, is this OK?'"

But it sounds like that in-grown, gender-based self-doubt has met its match in the Full Frontal office. Black calls Bee "the kindest person in the world," whose accessibility and thoughtfulness sets the tone for her staff.

"I know every workplace has a culture and ours is this very supportive, feminine culture where it’s like, 'That was a great joke, and you look so pretty today, do you want a cookie?'" Black's voice goes up an octave on that last part. "Because of the nature of our work, we really spend 12 hours a day together and we travel together. And so there’s just a level of intimacy that comes when you work that closely together."

This is her first series writing job, but Black worries she may be spoiled by the comedic democracy Bee has established, starting with accepting submission packets from unrepresented talent in order to find new voices. (That's how Black ended up on the show.) The comedian is able to flourish in the fast-paced, trim-the-fat workplace, she says, because she's not "precious about [her] writing." Plenty of jokes and segments have ended up in the wastebasket or on the cutting room floor before the show hits its Wednesday night time slot, either because a huge story has broken and made everything else obsolete — a regular occurrence in the Trump term; because a story was just "too sad" to support humor; or because someone else had a better idea.

The benefit to viewers, of course, is that they end up with the best possible final product, not one tainted by who-gets-what and whose pride needs to be coddled. But Black believes that marginalized audiences are getting something even more out of the self-proclaimed feminist series, especially when that word isn't universally embraced, as well as Bee's outspokenness.

"Every human wants to be equal, but I think people feel afraid that, 'If I say that I deserve this, someone’s going to get mad at me or someone’s going to try to smack me down,'" Black says. "So it is great that to have this wonderful, powerful woman saying 'I deserve it,' and making maybe just a little more space for other women to say that."

And from the platform of Full Frontal, Black and her colleagues are taking on sexism, partisanship, and closed minds — one friendly and human conversation at a time.