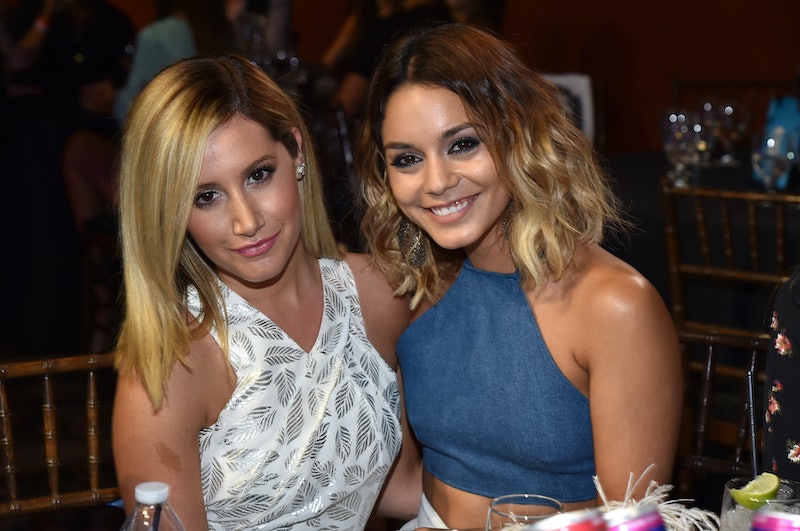 Despite playing enemies on-screen in the High School Musical franchise, they're actually super close in real life — but most fans probably knew that already. What most fans probably don't know, however, is that Ashley Tisdale and Vanessa Hudgens' friendship started well-before their East High Wildcat days, Tisdale recently revealed during an interview with Us Weekly. So, they became besties first, and then got cast in a film together. How cool is that?

Tisdale spoke at-length to Us Weekly about her longtime friendship with Hudgens, which dates all the way back to at least 2005. That means they've known each other for like, basically have their lives. And you'll never guess where the pair first crossed paths.

"We actually worked together a year before in a Sears commercial, and from that day on we were super close," Tisdale told the outlet. "So people don’t really — I think some people know that, but they think it was that movie that brought us together and it really wasn’t."

The star then went on to explain how and why they've remained so close over the years, and what she loves most about her famous pal. "We just have a connection and she’s so awesome and one of my best friends," she gushed to Us Weekly.

"What I love about her is that she’s so talented, and I think what we share is that we’re really grounded people and I think that that’s important, especially with what we do, is to stay grounded."

So sweet, right? Both ladies have waxed poetic about one another more than a few times over the years, especially when one of their birthdays rolls around. Back in December 2016, Tisdale shared a pic of the duo dressed up in disguises and wrote, "This girl. We've done so much together. Three movies, toured the world, played for 80,000 in South America ... heartbreak, love, laughing, crying, and I honestly couldn't have done all that with out her."

Hudgens sent Tisdale a birthday shoutout of her own via Instagram in July of this year, alongside a photo of them both at a friend's wedding. "HAPPY BIRTHDAY TO MY LOVE @ashleytisdale," she wrote. "We’ve done so much life together. Can’t imagine it any other way. So excited to see what this year brings u love. You deserve the world. love yoooou," the star exclaimed, followed by four hearts and a rose emoji.

Seeing as how there's no shortage of drama when it comes to relationships in Hollywood, it's pretty amazing that Tisdale and Hudgens have stayed so close for so long. And if what Hudgens told Women's Health back in April 2017 proves to be true, they're going to be close for many years to come.

"I'm a loyal person," she admitted to the outlet. "[Tisdale is] one of those girlfriends who will be my friend forever."

So, basically, you could say that they plan to *ahem* "Bop to the Top" together from here on out. (Sorry, but you must have known that there would be at *least* one High School Musical song reference coming.) Wildcats forever!