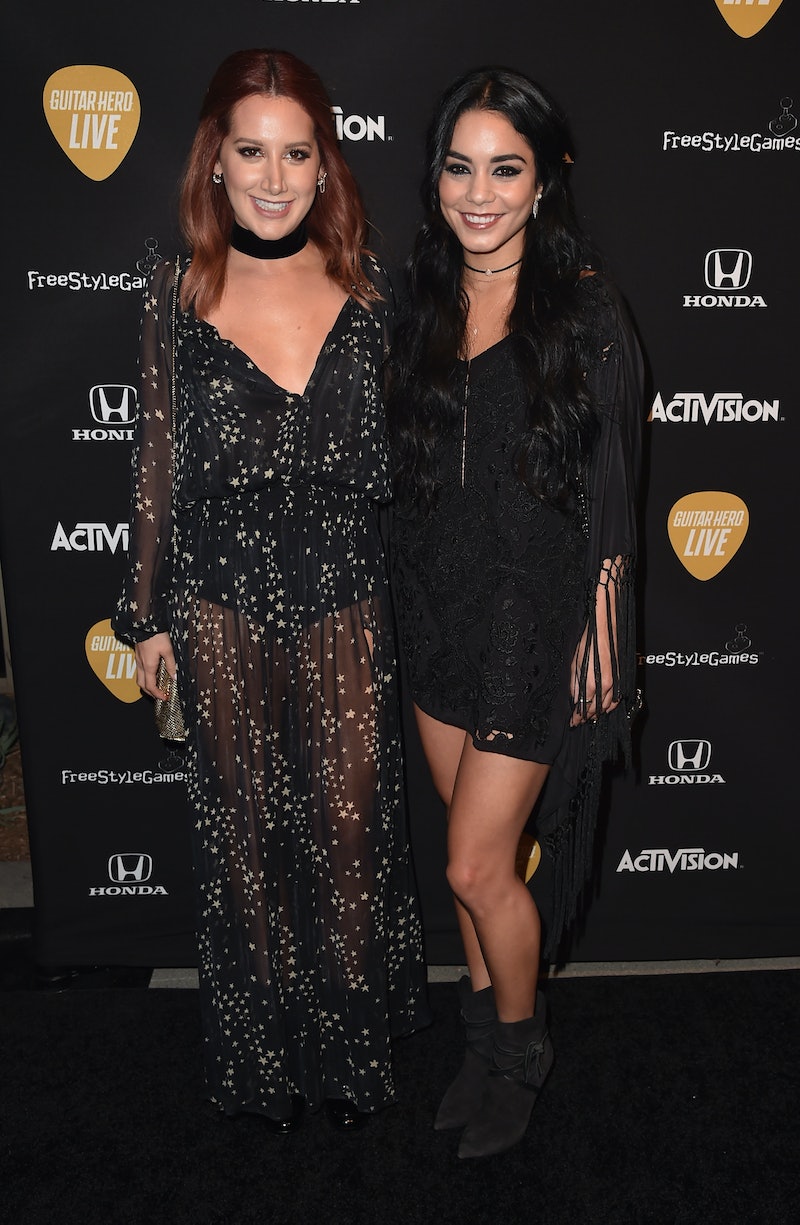 Hudgens posted a selfie of herself and Tisdale, who turned 34, donning grey, beaded bridesmaids dresses while puckering their lips for the camera. The High School Musical co-stars served as bridesmaids at the June 15 wedding of actor Kim Hidalgo to Pretty Little Liars' Brant Daugherty. Both ladies posted well wishes for the bride and groom via Instagram, at the time. Hidalgo also told People that both herself and Hudgens had been bridesmaids at Tisdale's 2014 wedding to musician Christopher French.

The (ever-so-slight) throwback photo of Hudgens and Tisdale in their bridal party best was captioned, "HAPPY BIRTHDAY TO MY LOVE @ashleytisdale we've done so much life together. Can't imagine it any orher way. So excited to see what this year brings u love. You deserve the world love yoooou," alongside heart and rose emojis. We're not crying, you are! Tisdale responded to the bestie birthday wishes by commenting, "I love you so much," next to pink hearts.

If you didn't already know of Tisdale and Hudgens' friendship, "Get'cha Head in the Game." (I'll try to refrain, no promises.) In 2016, Tisdale posted a throwback photo of her own for her former co-star's birthday, where the two can be seen sporting disguises at the height of High School Musical mania. Tisdale captioned the wig-worthy post:

"This girl. We've done so much together. Three movies, toured the world, played for 80,000 in South America, dressed up in wigs so we could go get food in the venue and no one would recognize us (they didn't), heartbreak, love, laughing, crying, and I honestly couldn't have done all that with out her. @vanessahudgens you're a gift to us all. I love you! #happybirthdayvanessa."

In January 2017, Hudgens and Tisdale continued to dish out the nostalgic friendship content the Internet craves. Tisdale and Hudgens sang "Ex's & Oh's" by Elle King, making the hit song their own. The Suite Life of Zack and Cody actor often performs covers of songs alongside husband French, who accompanied the pair with the guitar and an arrangement during their duet, on her YouTube channel.

"We did not have a song in High School Musical, just the two of us, we always wanted one too," Tisdale said before the performance, while Hudgens nodded. It's actually pretty insane these two characters never got a proper duet, and a whole lot of people agreed. To date, 34 million people have viewed the video, clearly "finding what (they've) been looking for."

While we wait for a full-blown album, reunion, or (dare I say) buddy cop movie with these two, all of the birthday shoutouts and pop song covers are well-appreciated.

One narrative that does "break free" (sorry) from all the rest? While High School Musical's legacy was once believed to be the love story between Gabriella and Troy is now undeniably a forever friendship for Vanessa and Ashley.

More like this
Lady Gaga Will Star In 'Joker: Folie À Deux' With Joaquin Phoenix
By Jake Viswanath
Taylor Swift Calls Dwayne Johnson "The Man" After Revealing New "Taylor's Version" Song
By Jake Viswanath
Selena + Chef Season 4 Was Filmed At Hannah Montana's Old Malibu House
By Jake Viswanath
Now That 'Renaissance' Is Here, Let’s Revisit Beyoncé’s First Solo Album From 2003
By Grace Wehniainen
Get Even More From Bustle — Sign Up For The Newsletter