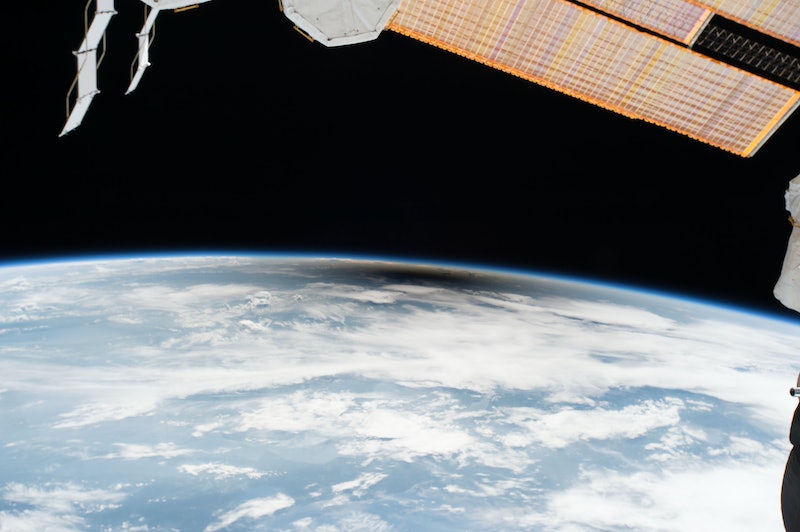 While you were fast asleep in the wee hours of the morning, an asteroid flew pretty close to the Earth. At 1:42 a.m. ET today, the small asteroid the size of a house (...yes, NASA considers those “small”) passed Earth at a distance of about 26,000 miles, flying closest over Antarctica. While that’s about 2,000 miles more than the circumference of our planet, it’s cutting it close when you’re talking about distance in space.

For reference, the moon is about 239,000 miles away from Earth. So, the asteroid passed at a little over one-tenth that distance, narrowly missing the ring of our communications satellites, the farthest of which is about 22,000 miles out.

“It's damn close,” said Rolf Densing, head of the European Space Operations Centre in Darmstadt, Germany, in an interview with The Telegraph. The asteroid, roughly 45 to 100 feet in size, was travelling at a speed of about 16,000 mph. To put that into context, in the two hours you’d be sitting in traffic trying to get from Los Angeles to basically anywhere, the asteroid could have easily flown around the circumference of the Earth.

So, to recap, scientifically speaking the house-sized asteroid, travelling thousands of miles per hour was “damn close” to the pale blue dot we call home. However, there was no real chance of the asteroid actually hitting or making contact with Earth.

The asteroid was initially discovered when it flew past Earth in 2012. That time, it was a little farther away, about one-fourth the distance between Earth and the Moon. Upon its discovery, it was named 2012 TC4, a very popular baby asteroid name in 2012.

NASA used the 2012 TC4’s close encounter Thursday morning as a chance to test our planetary defense system, seeing whether we’d be prepared if an asteroid were to actually head straight for Earth. “Asteroid trackers are using this flyby to test the worldwide asteroid detection and tracking network, assessing our capability to work together in response to finding a potential real asteroid-impact threat,” said Michael Kelly, a NASA program scientist, in a press release from NASA. “Scientists have always appreciated knowing when an asteroid will make a close approach to and safely pass the Earth,” Kelly also said, “because they can make preparations to collect data to characterize and learn as much as possible about it.”

Thursday’s test was a “team effort” which involved “more than a dozen observatories, universities and labs around the globe,” according to Vishnu Reddy, an assistant professor at the University of Arizona and a NASA consultant. At a time when the world can seem bleak and scary, it’s nice to know there are brilliant people out there making sure we don’t all get smooshed by a flying space rock.

So, what happens if an asteroid is headed toward Earth? If its trajectory looks like the asteroid is going to hit a populated area, agencies like NASA and the ESA would warn people and work with the government to evacuate people if necessary. Current technology allows our space agencies to predict when asteroids will be in Earth’s periphery. (They knew about 2012 TC4 coming “damn close” to Earth months ago.)

If the asteroid or object were over 130 feet in size, scientists would need to try to deflect its trajectory to prevent serious damage to Earth. Using the “kinetic impactor” method, space agencies would fire a satellite into the asteroid to try to shift its path. As The Independent points out, a “small” asteroid with a 15-meter diameter (comparable in size to 2012 TC4) could do serious damage to most of downtown London if it hit.

Thankfully, NASA says no known asteroid poses a serious threat, and we don’t need to worry about any hitting Earth for at least the next 100 years.