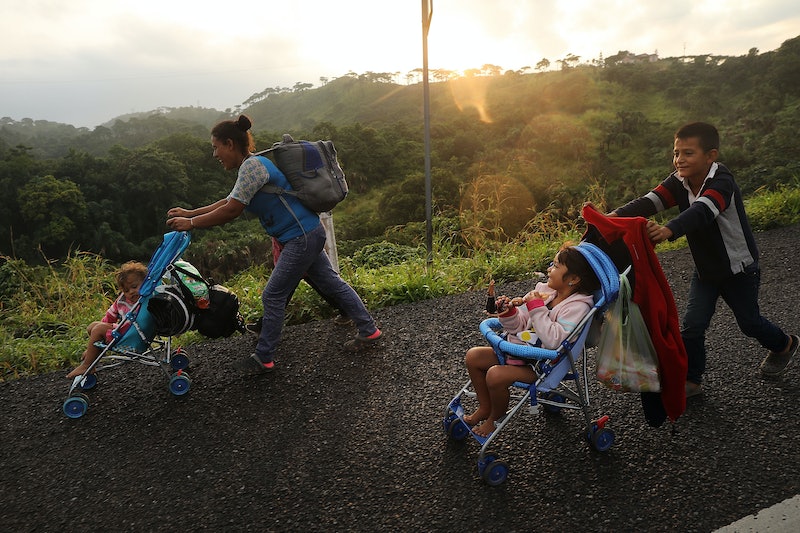 Following the death of a 45-year-old Mexican man on Monday, three migrants have now died in the custody of U.S. Customs and Border Protection (CBP) in three months. Their deaths have brought more attention to the conditions at CBP facilities, as well as the conditions Central Americans face while traveling to the United States. If you're not well-versed on the topic from reading or personal experience, you may have questions about the journey that Central American migrants take to the border.

After two migrant children died in CBP custody in December, some Americans argued that their parents were responsible because they decided to make the difficult journey to the United States with their kids. But immigration analysts and advocates for immigrant children say those assertions downplay the fact that parents are typically trying to protect their families by migrating in the first place.

"Some parents will flee knowing that their children are in danger," Jennifer Nagda, policy director of the Young Center for Immigrant Children's Rights, tells Bustle. "They're willing to take the chance that something might happen on the journey because it's a chance. They believe that the harm that will befall their children or themselves in their home country is a certainty." And in many cases, that's true, Nagda says. "We're seeing that with people who've been returned and who've been subsequently killed."

Here are some things you should know about the journey — starting with why people choose to make it in the first place.

Why Do They Leave Their Home Countries?

Migrants who attempt to cross the U.S.-Mexico border are often coming from countries such as Honduras, El Salvador, and Guatemala that are plagued by poverty, gang violence, and extortion (and some of the blame can be laid at the feet of the United States' historical interventions in the region). For these migrants, staying in their home country can often be a death sentence. Gangs sometimes specifically target children for recruitment or threats, which means that parents can be particularly desperate to find a way to get their kids out of the country.

"Many of these parents have no choice," Tom Jawetz, vice president of immigration policy at the Center for American Progress, tells Bustle. "While they understand the dangers of the trip, they understand just as well the dangers of remaining at home, where extreme violence and crushing poverty are part of their everyday lives."

What Are The Dangers Of The Trip?

The journey to get to the United States often involves walking thousands of miles. "They're traveling through difficult terrain," Megan McKenna, communications director of Kids in Need of Defense (which supports unaccompanied immigrant minors), tells Bustle. "They may be traveling through very hot conditions or very cold conditions." She adds that the area along the border is sometimes especially dangerous: "To enter into the United States you may have to cross a river or cross the desert."

Migrants also aren't able to bring many changes of clothes — if any. "They're not wearing fancy hiking shoes that allow them to traverse desert terrain," McKenna says, so they "may be hopping onto the back of trains or trying to hop onto buses or other trucks in order to migrate through different countries. That can be a dangerous form of travel."

There's also the risk of kidnapping or exploitation. Amnesty International reports that up to 20,000 Central American migrants are kidnapped on their way to the United States each year. Particularly when they're attempting to cross the border between checkpoints, migrants often pay smugglers (or "coyotes") to help them across. These smugglers sometimes exploit or even abandon the people they've promised to bring to safety.

"People should also understand that the Obama administration set up a program that allowed Central American children fearing persecution and violence to request protection without making that dangerous journey," Jawetz tells Bustle. "The Trump administration ended that program."

Why Do Migrants Sometimes Travel In Large Groups?

The route to the border can be dangerous, so migrants sometimes do opt to travel in large groups. These so-called "migrant caravans" can provide "safety in numbers" to help mitigate the risk of being kidnapped or extorted along the way, The Conversation reports.

In the fall, around 6,000 people arrived at the U.S.-Mexico border after walking there in such large groups. Around 4,000 are still waiting at the border to seek asylum, according to The New York Times. The activist organization Pueblo Sin Fronteras partially guided people along the way, according to The Washington Post, and helped them avoid some potential threats, including drug smuggling routes created by El Chapo's Sinaloa cartel. Of course, caravans don't guarantee safety; kidnappings can still happen, and traveling so far in a crowd can lead to injuries and health issues.

Other migrants travel in smaller groups or even make the journey alone. In 2014, the Obama administration went into crisis mode when tens of thousands of children who weren't accompanied by adults arrived at the border. Those levels were rare, but kids still make the journey alone all the time. When they arrive, "they may be wet and freezing, or dry and dehydrated," McKenna explains. "Those are the sort of really dangerous medical conditions that we worry about."

Why Do Some People Cross The Border Between Entry Points?

There are many reasons someone might choose to cross the border illegally instead of turning themselves in at a point of entry. For one thing, a "15-year-old child coming from Honduras isn't going to know that there's a port of entry in San Ysidro, California," McKenna tells Bustle. "They're just going to follow a guide or follow other people, and they're going to get to whatever part of the border they get to."

Experts believe that the Trump administration's policies — including "metering" tactics that slow down the rate of asylum processing — have the effect of encouraging migrants to cross illegally. A recent report from Politico suggested that migrants haven't been deterred from crossing the border altogether, but are increasingly choosing to cross between ports of entry, despite the fact that those trips are often more dangerous.

What Happens When They're Detained?

Whether migrants cross the border at or between ports of entry, they are detained at processing centers once they come into contact with CBP. And as McKenna explained, many of those people require medical care at this juncture.

"Historically, we have worked to make sure that ... there's some baseline level of care to make sure that their condition doesn't deteriorate or become worse while they're in the process of asking for [asylum] protection," McKenna says.

But according to McKenna, conditions in detention facilities have "deteriorated" in recent years, and in some cases facilities weren't equipped to deal with migrants' medical needs in the first place. She mentions a group of migrants who alleged in court last July that they had been detained in facilities that were unsanitary, bitterly cold, and lacked edible food and clean drinking water.

Increased scrutiny was brought to these conditions late last year when Felipe Gómez Alonzo and Jakelin Caal Maquin died in CBP custody, and the death of an unidentified man on Monday renewed that attention. Felipe and Jakelin's causes of death have not yet been formally determined, but many critics blamed Border Patrol, in part because both kids reportedly exhibited their first signs of illness once they were already in CBP's custody (Felipe had been detained for nearly a week; Jakelin had been held for hours).

In statements about the deaths, the Department of Homeland Security and CBP said the children received appropriate medical care and referred to "the dangers posed by traveling long distances."

Are All Migrants Breaking The Law By Coming To The U.S. Without Documents?

Migrants who journey to the United States to request asylum aren't doing anything illegal. People have a right to seek asylum under international law: The Universal Declaration of Human Rights has guaranteed it since 1948. Parents who seek that protection in the United States are trying to enable their kids to exercise their fundamental rights.

Of course, having the right to request asylum doesn't mean that a person will be granted that protection, as McKenna notes.

"It means they get thrown into a really complicated legal system where they have to prove that they are entitled to that protection," she says. "And it's a system where the deck is pretty much stacked against them."

Unlike when the government brings a case against a U.S. citizen, asylum seekers don't automatically get assigned a public defender if they can't afford a lawyer. Migrants seeking asylum must also prove that they've suffered persecution in their home countries using what McKenna calls "very challenging legal criteria."

Migrants are allowed to seek asylum either at the border or retroactively, once they've crossed over. The Trump administration tried last year to bar people who arrive between ports of entry from seeking asylum, but the Supreme Court has temporarily halted the order.

There's a lot to know about a migrant's journey to the United States. The most important thing to keep in mind, though, is that people who make the trek aren't being cavalier with their lives or those of their families. When parents decide to set out on the journey, it's because they have carefully weighed the factors and concluded that the risks of migrating are better than staying put.

More like this
Meet The Rugby World Cup Breakout Star Making The Sport More Inclusive
By Shahed Ezaydi
Here's The Role Lady Susan Hussey Played At Buckingham Palace
By El Hunt
How To Follow The New Royal Family Social Media Accounts
By Sam Ramsden
Is Queen Elizabeth II Or The Royal Family In Netflix’s 'Harry & Meghan' Docuseries?
By Jake Viswanath
Get Even More From Bustle — Sign Up For The Newsletter