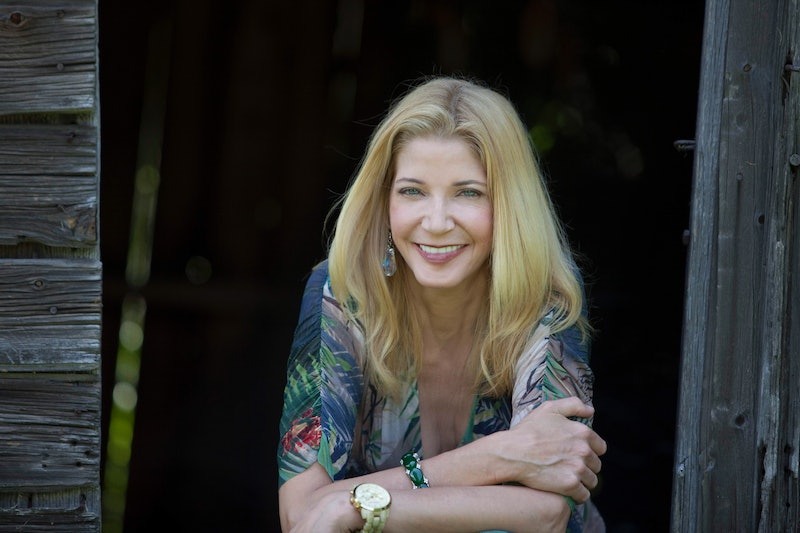 In Bustle’s Q&A series 28, successful women describe exactly what their lives looked like when they were 28 — what they wore, where they worked, what stressed them out most, and what, if anything, they would do differently. This time Sex and the City author Candace Bushnell discusses the ups and downs of being a young writer in New York.

Candace Bushnell is best known as the woman behind Sex and the City, her New York Observer column-turned-book-turned-HBO-series. While Bushnell is in many ways the inspiration for Carrie Bradshaw, at 28, she wasn’t living Bradshaw’s fabulous, Manolo Blahnik-filled life. She was just trying to make rent as a freelance writer.

Bushnell moved to New York at 19 and got her start covering sex and relationships for Mademoiselle and Self. She wrote boldly about her own love life and the dating woes of her friends who, like her, were unmarried career women. In her late 20s, Bushnell began laying the foundation for her Sex and the City column. She went out constantly and wrote about everything she saw: the model-obsessed men, the cheating husbands, and the bored socialites she’d go on to immortalize. But it wasn’t until she was 35 that she actually scored the column, and it took many more years for Sex and the City to become the cultural juggernaut that it is today.

"In the ‘80s it was mini skirts, it was cocaine, and everybody went out."

Now a celebrated author of 10 books, Bushnell has just released Rules for Being a Girl, co-written with young adult author Katie Cotugno. The novel looks at the #MeToo movement through the lens of a high school student who’s been assaulted and decides to take a stand against sexism at her school. Ahead of the book’s release, Bustle spoke with Bushnell about the misogyny she faced in her 20s, splurging on Louis Vuitton luggage, and how she found her voice as a writer at 28.

By 28 you had lived in New York almost a decade. Were you beginning to feel like a real New Yorker?

It absolutely felt like home. That was a time when I would never leave Manhattan. I wrote for women’s magazines, I bought everything on sale designer, I went to clubs and I had really glamorous friends. But New York was hard. It’s expensive and there’s a ton of competition and people are mean. You know how people are mean on the internet? People were mean like that in real life.

How was your writing going?

I was a freelance writer who wrote about relationships and dating. All of it was supposed to be funny. I probably wrote an article a month and I pitched ideas all the time. Some of the pieces were precursors to Sex and the City. I wrote this [Mademoiselle] piece called “The Gold Diggers of 1989” and it was about all my friends. One of them was Amalita Amalfi — she was always wearing Chanel — and then I wrote about her in a Sex and the City column and that character ended up in one of the early episodes of HBO’s Sex and the City.

Did you feel successful at 28?

No. People didn’t take the writing thing seriously. You had to struggle to say “I’m a writer.” People would be like, "Well, have you written any books?" And I'd have to say no. My boyfriend would ask, "How much money do you make?" He told me that was not enough money to say that you are anything.

How did you keep going?

I’ve just always been somebody who keeps going. When I was in my 20s people were saying to me, “You can’t do this!” In those days people were not like, “Oh yeah go and be a young woman and be a writer!” The world wasn’t open in that way. Publishing was very “white male.” It was a pretty sexist business. It has changed enormously. [But] writing is just something that I’ve always done. Being a writer is so much a part of my identity and it has been since I’ve been a kid.

What was a typical Friday night like when you were 28?

Oh my god. I’m sure I was wearing something mini, because I always wore really short skirts. In the ‘80s it was mini skirts, it was cocaine, and everybody went out. There were lots of different little clubs that you could go to and then restaurants were really theatre. They would hold maybe 400 people and you would go in and everybody would know everybody. You would walk around saying hello, talking about business and trying to impress each other.

I never left Manhattan and I wore black all the time. At the time I probably lived right near the Hearst building in midtown on 57th street. It was actually great, because every amazing department store like Bergdorf's and Saks and Tiffany’s was just two or three blocks away.

What was your biggest splurge?

More like this
At 28, Lesley Manville Was Acting, Picketing, & Singing Kate Bush Songs
By Olivia-Anne Cleary
The Biggest Differences Between 'Bullet Train' & The Book It’s Based On
By Arya Roshanian
'The Sandman’s Ending Is A Departure From Neil Gaiman’s Comic Book Series
By Kadin Burnett
50 Books About (& Inspired By) Greek Mythology
By Morgan Leigh Davies
Get Even More From Bustle — Sign Up For The Newsletter