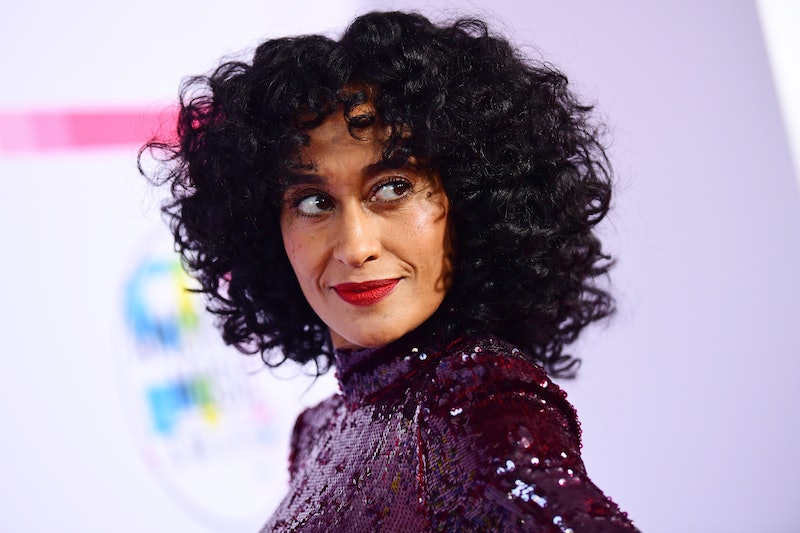 In Bustle’s Q&A series 28, successful women describe exactly what their lives looked like when they were 28 — what they wore, where they worked, what stressed them out most, and what, if anything, they would do differently. This time, Tracee Ellis Ross reflects on how 28 was both an exciting and terrifying year for her as a young actor on Girlfriends.

At 47, Tracee Ellis Ross has fulfilled many of her lifelong dreams. She's won a Golden Globe for her role as Rainbow "Bow" Johnson on black-ish, launched the hair brand Pattern Beauty, and stepped into the role of executive producer on the black-ish prequel mixed-ish. But the multi-hyphenate still had one childhood fantasy sitting on the backburner: singing.

"The longer you wait to do something, it gets scarier, whether the fear is actually valid or not," Ross tells Bustle of her prior reluctance to pursue music. "Like most heart desires or childhood dreams, the validity of them doesn't change. The fire is still there."

For Ross, whose mother is the legendary musician Diana Ross, it took finding the right script to push through her musical fears. She found that in The High Note, in which she stars as the larger-than-life music icon Grace Davis (available on demand now). Ross recorded six original songs for the film's soundtrack, including the lead single, "Love Myself." The experience was one she thinks that even "28-year-old Tracee would ask, 'What took you so long [to do it]?'" Ross says with a laugh.

Below, Ross opens up about her life at 28, her designer splurges, and how the success of Girlfriends allowed her to forge her own path.

I was feeling good but I was also terrified. It was a big moment in my life getting cast in Girlfriends [as Joan Clayton]. I look back at photographs and my hair was thriving. I was very skinny. When I'm scared, I don't eat, so I guess that's what was going on. As Girlfriends progressed, my body filled out. I got comfortable.

I had been living in Los Angeles for a little bit, in the same apartment I found when I first moved there. I was still driving my black Nissan Pathfinder that I got when I was a teenager. I waited until Season 2 [of Girlfriends] to purchase a new car.

Was there a feeling that you were carving your own path, thanks to the success of Girlfriends?

From a financial standpoint, it was the first time I was able to experience a little bit of a deep breath. Like, "I'm OK. I can support myself and I know that I've got money." Before every season, I would buy myself a gift — something that I never would have thought I could have afforded before. It was something special.

Do you remember what you splurged on?

I bought these Vivienne Westwood boots [to celebrate Season 1 of Girlfriends]. They were $780. I had never spent that much money on anything. You would go to the Vivienne Westwood store, and they would trace your foot on a piece of paper, because there wasn't a shoe size. They made them for you and they would ship them to you. I was like, "This seems so dumb … Am I ever going to get my boots?" But I still have them.

Louis Vuitton had this oversized, red patent leather tote with the embossed LV [logo] all over it. I always wanted a Louis Vuitton bag, and it was obscenely expensive. By the time Season 2 rolled around, I had stalked that bag. I had so much anxiety when I bought it, because although I could afford it, it seemed so stupid. But I still have it and love it. It marks that time.

Probably exactly the way they look now, which is home and watching TV. I'm not one to go out much, but myself [and Girlfriends co-stars] Golden [Brooks], Jill [Marie Jones], and Persia [White] had a lot of fun together. We went to the club a couple of times, because I felt so safe with them. We would kill the dance floor.

What was your relationship with yourself like at that time?

I had a lot of self-doubt and self-judgment, particularly when we first started Girlfriends because it was so new to me. We would shoot episodes on Mondays and Tuesdays. On Wednesday mornings, we would do a big table-read in front of the network, the studio, the writers, and the producers. During that table read, I thought I was a terrible actor. I would get in my head, and I would beat myself up.

During Girlfriends, someone said to me, “If you have one foot in the past and the other foot in the future, you're pissing on the present,” which is so silly, but it really helped. All you can do is show up, do your work, do your best, and then let it go.

"One of the biggest lessons that I learned is things often take longer than you think they should take, but it doesn't mean that you're doing something wrong."

So many of my dreams took until my 40s to come true. I was big on vision boards, and I have one of my vision boards from the first year of Girlfriends. It's tucked away in a closet, but it brings me to tears when I look back at it every once in a while.

I wanted to sing. That was still in my heart at 28. I was specific about the amount of money I wanted to earn and what that would allow me to do in the world, in terms of how I could support different organizations and the kinds of gifts that I wanted to give people. At 28, I was burgeoning on the idea of creating a line of hair products.

One of the biggest lessons that I learned is things often take longer than you think they should take, but it doesn't mean that you're doing something wrong.

Is there one piece of advice you'd go back and tell your younger yourself?