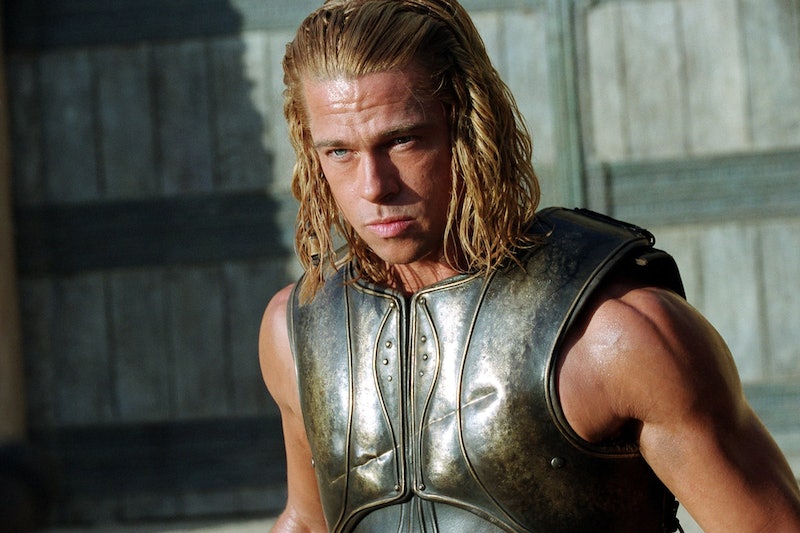 I’ve been a Greek history geek since my grandmother sat me down with a bowl of kalamata olives, feta cheese and a book of Greek mythology at the kitchen table and said: “This is your history. This is Greek.”

Homer’s Iliad has always been a favorite of mine. I love the characters and their deep flaws. I love the high stakes and the power play and poetry. And I’ve always been fascinated that what eventually leads the Greeks to victory against Troy is the death of Patroclus, a man inconsequential to all but Achilles, who calls him “the dearest life I know.” Patroclus dies in Achilles’ armor in an attempt to rouse the Greek troops because Achilles won’t fight in the middle of an honor feud with Agamemnon, commander of the Greek army. After Patroclus’ death, Achilles throws aside honor and life itself to pursue Hector, Prince of Troy, the man who killed Patroclus in a case of mistaken identity. Achilles brutally murders Hector, though he knows his own death will follow soon after. His quest for death takes him to the battlefield again and turns the tide of the war for the Greeks.

This past Christmas, I received Madeline Miller’s The Song of Achilles as a gift. It gave me a chance to dive into the mythology I cherish and it also gave me a fresh interpretation of the relationship that fascinated me throughout The Iliad. The story has seen many incarnations but most that I’ve read neglect the beating heart of Homer’s legend: the love shared between Achilles and Patroclus. While The Iliad is vague as to the platonic or romantic nature of their relationship, Homer makes it perfectly clear that Achilles loves Patroclus with a fierce devotion. In The Song of Achilles, Madeline Miller places that love at the epicenter of the story. She gives the narration to Patroclus so that we get a front row seat for the journey of their relationship. She creates a tender, believable, timeless romance between the two men that makes The Iliad’s ending all the more poignant.

Achilles and Patroclus are the unlikeliest of partners — the one, a boy destined to earn fame from killing, and the other, a pacifist with a history of abuse and distaste for violence. When we meet Patroclus in The Song of Achilles, he is a scrawny, awkward boy neglected and scorned by his father, a king. Achilles, also the son of a king, is skilled and beautiful, born from his father’s union with a goddess and headed for a future of glory. When Patroclus is banished to Achilles’ kingdom after a horrible accident that leads to his disinheritance, he is alone and has already learned his own inconsequence. He becomes a loner. Achilles changes that. He finds the boy hiding from the other foster children at his father’s house and offers him a chance to attend his own lessons and be his companion, so he won’t be punished for avoiding the other boys.

They go out to the practice field and Patroclus convinces a reluctant Achilles to showcase his fighting skills. Achilles obliges, but it is the only time he has ever practiced with another boy. Usually he is forbidden to do so because his skills so surpass the others. Patroclus wrestles with jealousy at his friend’s perfection:

There was an edge to me now, that familiar keenness of anger and envy, struck to life like flint. But the bitter words died even as I thought them.

He regarded me a moment, in silence. “So?”

Something in the way he spoke it drained the last of my anger from me. I had minded, once. But who was I now, to begrudge such a thing?

As if he heard me, he smiled, and his face was like the sun.

I had seldom stopped to consider how isolating it would have been for Achilles to be as glorious as he was. How lonely and frustrating it would be to never be able to fight another boy in play as the rest of the boys would do. To always be looked upon with respect and awe but very seldom genuine, personal affection. Patroclus provides this for Achilles and in return, Achilles gives him confidence and the intimacy he had been denied throughout his childhood. Our friendship came all at once after that, Patroclus says.

The most beautiful part of the novel for me is when teenaged Achilles and Patroclus train with Chiron, the centaur in charge of tutoring the greatest heroes (hello, Jason and Hercules). Achilles and Patroclus learn about healing, nature and ethics from Chiron. Privately, they learn about each other — their bodies, their minds, and their love, which is finally consummated. In a line of beautiful subtext shortly thereafter, Patroclus vows to himself, I will never leave him. It will be like this, always, for as long as he will let me.

But for Patroclus, being with Achilles is an almost daily challenge. Achilles’ mother, a goddess, has a serious grudge against humans because she was forced to marry one. So, she’s really not pleased that her son has chosen a mortal as his companion and lover. No one bothered to tell Patroclus that Achilles had set off to train with the centaur in the faraway woods. So, Patroclus follows him on his own. When the call to war in Troy comes, Achilles decides to go. Both know the prophecy that determines Achilles’ fate: He will win great fame at Troy, but what brings his glory also brings his death. Both know Achilles will not return if he goes to Troy. Despite this, Patroclus doesn’t hesitate to go with his companion. He knows what glory and reputation mean to Achilles and he won’t stand in the way.

On their way to Troy, Odysseus observes the two and their closeness. He suggests they distance themselves before heading off to war to stave off rumors that they’re lovers. After all, he says, it’s common enough among boys but you two are men. Our men liked conquest, Miller writes in Patroclus’ voice, they did not trust a man who was conquered himself. Patroclus immediately sees how this could affect Achilles’ reputation:

“I would still be with you. But I could sleep outside, so it would not be so obvious. I do not need to attend your councils. I-”

“No. The Phthians will not care. And the others can talk all they like. I will still be Aristos Achaion.” Best of the Greeks.

“Your honor could be darkened by it.”

“Then it is darkened.”

Achilles and Patroclus respect and really know each other. Achilles sacrifices a piece of his honor to be with Patroclus. Patroclus never questions Achilles’ decision to go to war and to his death. He doesn’t want to change Achilles, even though he knows he will lose him. Patroclus wants to be there until the end. He assumes Achilles will die first, then him.

After the two arrive at Troy and Achilles joins his first battle, he is a hero. He becomes the best of the Greeks. And with that comes all the spoils of war, including captive women. In Miller’s version of the tale, Achilles is plainly uninterested in women, yet in The Iliad he is referred to as having a great harem tent of stolen women taken as prizes. Miller’s Achilles does this to please Patroclus. He takes as many women as he can to save them from certain rape at the hands of the other generals like Agamemnon who are clearly interested in women and do not have Patroclus’ scruples. Thus, Patroclus becomes Achilles’ conscience. Instead of a harem, the women’s tent becomes a tent of safety, a place where the ladies can learn Greek if they wish or other skills taught by Briseis, the captive whose seizure will eventually push Achilles into a zero-sum game with Agamemnon.

The beauty of the relationship between Patroclus and Achilles in Miller’s book is its health. Patroclus knows Achilles is doomed. He knows his companion so well that not only does he go with him to Troy (despite lacking any talent as a soldier), he doesn’t question Achilles’ right to choose his own destiny. Nor is he threatened by that choice. He knows he can no sooner change Achilles’ mind than he can change Achilles, himself. In the end, each respects the choices of the other and that makes the relationship startlingly beautiful to me.

Traditionally, Achilles is portrayed as having two main characteristics: he’s the best of the Greeks and the proudest of the Greeks. Miller looks beyond the legend to find a young man whose destiny is at odds with the man he loves. And the only attribute Homer gives Patroclus traditionally is his loyalty to Achilles. He is defined by Achilles’ love for him. In Miller’s version of the story, Patroclus is defined by his love for Achilles, by his promise never to leave him, and by his ultimate sacrifice. After Patroclus’ death, Achilles abandons his hubris and his plans for his own greatness. The feud with Agamemnon is gone. All that remains is a man, not a hero, suddenly heartbreakingly human.

More like this
16 Novels That Paint A Realistic Portrait Of Abortion
By K.W. Colyard
The 'Spiderhead' Movie Ending Is Nothing Like The Short Story It’s Based On
By Morgan Leigh Davies
10 Must-Read New Books Out This Week
By K.W. Colyard
Ottessa Moshfegh Is Happy To Be Your “It” Girl
By Arya Roshanian
Get Even More From Bustle — Sign Up For The Newsletter