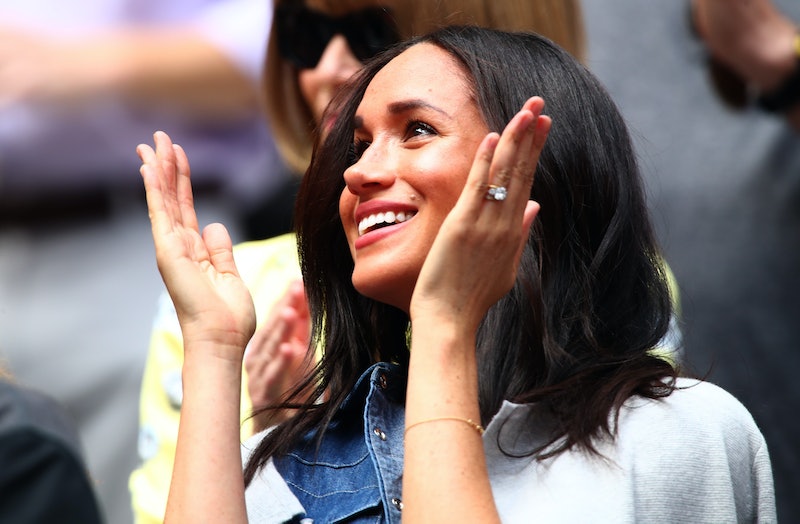 Meghan Markle was back in the United States on Sept. 7, where she attended the U.S. Open final and supported her longtime friend Serena Williams. While taking in the tennis match, The Duchess' signature style was in full effect and represented her family. Meghan Markle's necklace paid tribute to Prince Harry in the sweetest and most subtle way.

According to PEOPLE, Markle wore two 14-karat gold dog tag pendants from Los Angeles-based brand Mini Mini Jewels to the sporting event. One of Markle's necklaces featured an "M" initial for Meghan while the other featured an "H" for Harry. Each dog tag also included a diamond accent. The accessory was also a lovely way to keep her husband close by even though he was back home in the UK with their baby boy Archie.

PEOPLE also reports that Mini Mini founder and designer Tracey Kahn sent Markle an "A" necklace in honor of her newborn son but that she has yet to be seen wearing that particular necklace in public as of press time. However, Markle sported a different gold "A" charm necklace that referenced her son while attending Wimbledon earlier this summer.

Markle paired the delicate Mini Mini fine jewelry with a belted denim dress and a cropped gray cape. It was a simply sophisticated look for Markle, who is wrapping up her maternity leave and will be back in the public eye.

Kahn told PEOPLE that Markle's stylist friend Jessica Mulroney introduced The Duchess its offerings and the rest, as they say, is sartorial history. As a result of Markle wearing its pieces, Mini Mini is now receiving orders from all over the world, because the #MeghanMarkleEffect is indeed real. Bustle reached out to Kahn and Mini Mini for further comment.

UPDATE: Kahn responded to Bustle via email, writing, "We are honored and thrilled that Meghan Markle is wearing our dog tag initial pendant necklace. She is inspiring women across the world and will continue to be our style icon. Meghan Markle embodies exactly what our brand stands for and is truly beautiful inside and out. It's amazing that so many people connected with this sentimental piece."

Good news for anyone who wants to copy Markle's accessories style from the U.S. Open: The chic necklaces start at $124 a piece. There are several styling options, materials, and accoutrements that cost up to $245, which is still quite a steal compared to some of Markle's other favorite pieces. The necklaces also come in silver and rose gold, plus other gemstones are available so you can add your birthstone as your bling.

As for the rest of Markle's U.S. Open outfit, the fashion blog What Meghan Wore, which religiously documents Markle's ensembles and her signature style, reported that her medium wash denim shirt dress was by J. Crew.

Of course the casual but chic frock is currently sold out out on the brand's site. Still, nearly 1,000 people were on the site looking at the dress as of press time. The Duchess of Sussex often wears pieces from the affordable brand, which causes them to fly off the shelves as fans and fashionistas race to replicate her look. Markle further accessorized her dress with skinny rings, a slim bracelet, a gray tote, and aviator sunglasses, which she hung from the front of her dress while watching the match. Markle wore her brown strands down, center-parted, and falling in loose, beachy waves that framed her face. She kept her makeup neutral, rocking a slick of pink balm and glowing skin, which is her gorgeous and "go to" look.

The Duchess' appearance at the U.S. Open is a reminder that she'll be out and about wearing fabulous clothes and coats on the regular as she returns to her royal duties. Get excited for more Meghan Markle style.