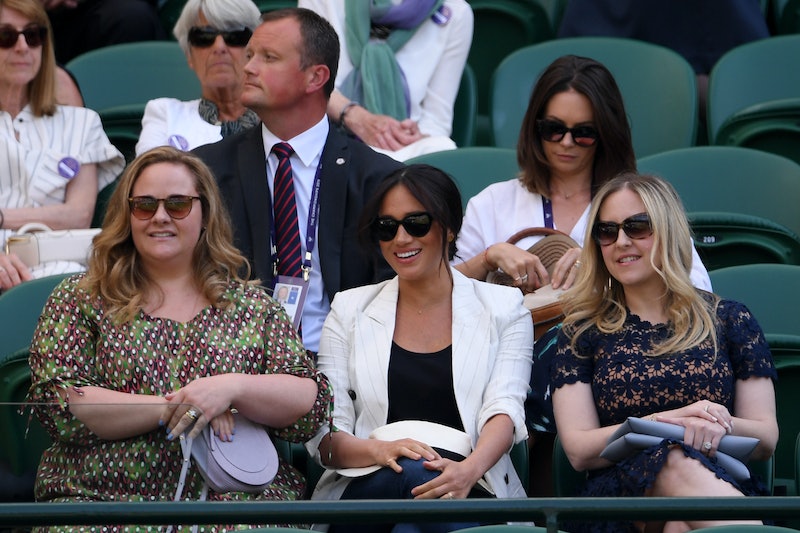 The Wimbledon tennis tournament is going strong in the UK, and that means celebrities are out in full force for the event. Alongside those celebrities, though, are the British royal family, and on Thursday, the Duchess of Sussex appeared at the championship, and Meghan Markle's "A" necklace may have taken some of the fanfare from the players. This seeming tribute to her soon is just too sweet to handle.

According to Harper's Bazaar, Markle is attending the tournament to support her longtime friend Serena Williams. The pair have often shown support for one another with the Duchess wearing the tennis superstar's clothing line and Williams, in turn, praising Markle's work with the Hub Community Kitchen. You've got to love ladies supporting ladies, right? Despite still being on maternity leave, Markle appeared for her friend, and she did so in such a chic way.

The Duchess wore a white striped blazer with a black shirt beneath, a pair of jeans, sunnies, and a white fedora. While the ensemble was effortless and so chic, one of her accessories was actually the best part. The necklace that Markle paired with the outfit was a short gold chain with a tiny letter "A" that stopped just at her collarbone. While not confirmed, the necklace certainly seems to be a tribute to her son, Archie.

According to Markle-dedicated fashion site Meghan's Mirror, the creator of the necklace has yet to be identified, but if you want to cop the look, initial necklaces aren't exactly difficult to find.

Anthropologie has a similar style for just $38.

ASOS also offers an affordable version of the necklace in silver.

Of course, you can always count on Target.

In February, Markle visited New York City where friend Serena Williams (among others) planned a baby shower for the expectant mother. Not many details are known about the shower, but when leaving the city, Markle was sporting a brand new "mummy" necklace from designer Jennifer Meyer that is believed to have been a gift from an attendee.

That wasn't the only time the Duchess wore the accessory, either. During her Prince Harry's appearance at WE Day, her husband called Markle up on stage with him. While she wasn't expecting to be part of the events, Markle was wearing the same "Mummy" necklace she'd allegedly received back in February.

With the addition of her new "A" necklace, the Duchess of Sussex has her entire family covered in the jewelry department. Back in 2016 when she and Prince Harry were just dating, she donned a similar necklace to the one she wore to Wimbledon but with she and Prince Harry's initials. Now, with the "A" accessory, Markle can pay homage to her entire family via her jewelry. Honestly, if you didn't want an initial necklace before, you just might now.