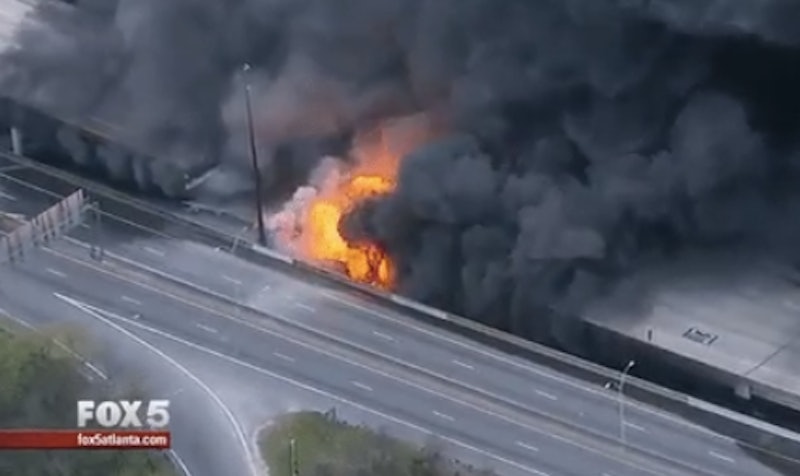 A major, heavily congested north-south route for the Southeastern United States, Interstate 85, collapsed in Atlanta on Thursday evening after a massive fire ravaged through the north end of the city. Local reports indicate that all lanes are blocked and will remain closed until the foreseeable future, a harrowing prospect for Atlanta commuters already familiar with the city's frequently gridlocked traffic. No injuries have been reported.

The Atlanta Fire Chief has warned that just because the south bound lanes on the interstate didn't also collapse, there is currently no way to gauge just how much infrastructural damage there is. They have advised motorists to get off at their nearest exit, though much of the traffic had come to a complete stop in both directions on the interstate until roughly 8:00 p.m. EST. Drivers are currently being rerouted to their nearest exit.

Despite the massive damage, it seems at least part of Atlanta will be running as business as usual on Friday. Nearby schools will operate on their normal schedules, though Atlanta's Fulton County Chairman John Eaves asked businesses to offer leniency to their workers in the days and weeks ahead. He also urged residents to use MARTA, Atlanta's local rail system, as workers prepared roads for safe travel again.

Fortunately, no one appears to have been injured. The pictures, though, are awful all the same:

The fire quickly spread throughout the northern section of the interstate.

Large Swaths Of Atlanta Are Gridlocked

It took hours for traffic to begin moving again, with motorists originally exiting wherever they safely could.

The Fire Department Is Working To Remove Motorists From The Interstate

Drivers were told to avoid the south bound lane into town as well.

The Fire Department Is Out In Full Force

Fulton County Chairman John Eaves released this statement in part to thank the department for their work: "Our special thanks to the firefighters and police officers on scene, whose quick work helped keep citizens safe during this unprecedented incident."

The Smoke Has Overtaken A Good Portion Of The City

Thankfully, motorists were rerouted right before the collapse, thanks to signs of the smoke.

Governor Nathan Deal told reporters: "We're trying to determine everything we can about how quickly can we repair it and get it back in service. I can assure you we will do everything to expedite the repair and replacement of that section of the bridge."

Atlanta Public Schools released the following statement, in part: "APS is working on a transportation plan to move buses to the North Atlanta cluster to ensure buses are available to transport students in the morning. We are asking that parents and guardians be patient as we strive to deliver the highest quality of service given these circumstances. We are asking staff to make arrangements to come in early to receive students."

The Governor said there are some theories, however: "The speculation I heard was it was some PVC products that caught fire. I do not know why they did or what the source of their transport was."

State Officials Are Working To Determine A Cause

Deal hopes to have additional answers by Friday.

Though there is massive infrastructural damage, the fire itself could have been much worse had the Atlanta Fire Department not responded as rapidly as they did.

More like this
6 Anti-Police Brutality Organizations You Can Support Right Now
By Syeda Khaula Saad and JR Thorpe
Twitter Has *A Lot* To Say About The "Single Penalty”
By Sam Ramsden
Watch Jacinda Arden’s Devastatingly Honest Resignation Speech
By Sam Ramsden
What The UK Blocking Scotland’s Gender Recognition Bill Means
By Sam Ramsden
Get Even More From Bustle — Sign Up For The Newsletter
From hair trends to relationship advice, our daily newsletter has everything you need to sound like a person who’s on TikTok, even if you aren’t.