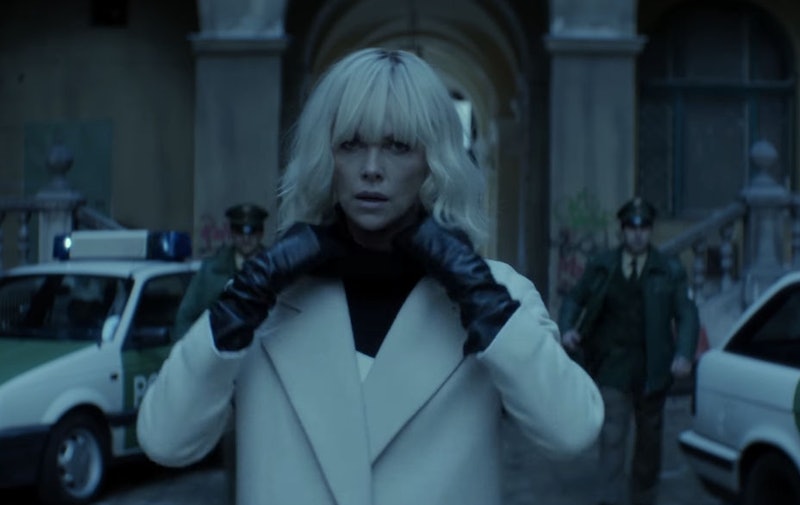 Hold on to your butts, friends, because Charlize Theron's action hero antics in the Atomic Blonde trailer are a hoot and a half, and very, very impressive. With her onscreen combat training it seems like there are about a hundred ways the South African actor could disarm a human. In the trailer released April 11, Theron shows a vast range of skills needed for a James Bond-esque spy — including taking out a bunch of Cold War baddies by using a long rope as a whip, killing a group of men with a gun hidden in a hotel ice bucket, and seducing French operatives who may or may not be double agents — all while in heels. It's all just so dang impressive.

Atomic Blonde, which is based on the 2012 graphic novel by Antony Johnston, The Coldest City, focuses on 1989 Berlin, right before the fall of the Berlin Wall. The story follows a top MI6 spy, Lorraine Broughton, who has been sent to Berlin to wipe out a brutal espionage ring that murdered an undercover agent, with whom she had a romantic past. Broughton is linked up begrudgingly with the Berlin station chief, David Percival (played by the delightful James McAvoy) and the two get some serious spy action in during their joint attempt to locate a threat that could destroy the West’s complete intelligence operation.

But Theron isn't just killing it (literally) with the supreme lethal spy routine, her character also has the sort of sassy spy lines that would make it difficult for even 007 himself to respond with a witty retort. For example, as the trailer opens, her character says off-screen, "I chose this life. And someday, it's going to get me killed." Then, immediately after shooting and killing at least three men in a hotel room she pours herself a drink, then says, "but not today." I can't decide what's more cool — her composure, the dialogue, or the fact that she seems perfectly fine drinking what looks to be straight vodka with only a few ice cubes. Seriously though — take that, James Bond's martini of choice — straight vodka is a serious drink for a serious spy.

And it's not like the actor relies entirely on a stunt double to back her up. According to The Wrap, Theron shared the consequences of Atomic Blonde's heavy-duty hand-to-hand combat sequences at CinemaCon 2017, which included cracked teeth. As the Mad Max: Fury Road actor put it, "I’m on my fourth root canal. Thanks, David," referencing the director of the this new film as well as Deadpool 2, David Leitch.

Atomic Blonde will be swinging into theaters (probably with the assistance of some sort of spy-favored grappling hook) on July 28, 2017.