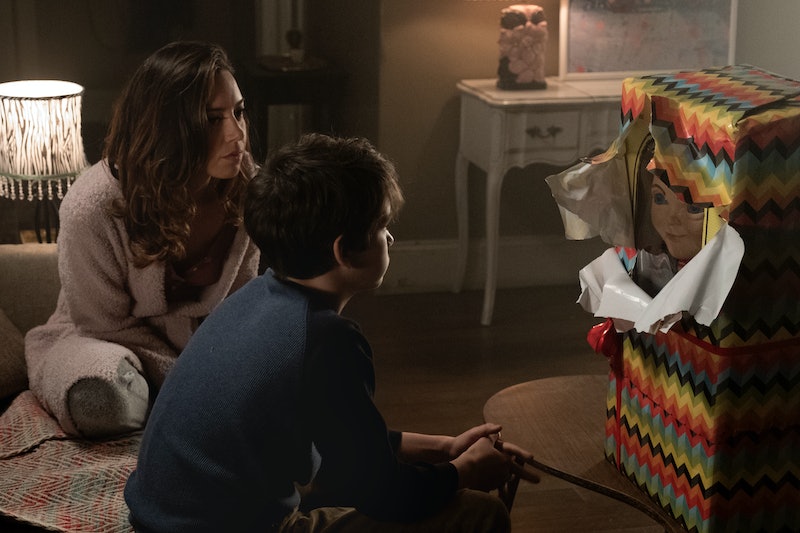 The new Child's Play, out June 21, is as current as the 1988 original was at the time. The remake updates the classic slasher movie by making Chucky — once a stuffed doll akin to a My Buddy — an AI doll connected to a virtual home assistant like Amazon Echo or Google Home. As in the first, however, Chucky's brought into the home of an unsuspecting family and loved — at first — by a young boy. And while you may be surprised to find Aubrey Plaza cast as a mom in Child's Play, she says that playing Karen came naturally and felt very close to home.

Speaking over the phone, Plaza recalls people in her life reacting negatively to her taking the tole. "It’s not time for you to be a mom yet," she recalls them saying. But she has some words for those naysayers: "I actually think that that’s bullsh*t because my mom was really young when she had me, and so I found a lot of connection with the character."

In Child's Play, Karen tells a coworker that she had Andy (Gabriel Bateman) when she was in high school, after a "productive" prom night, and the actor likes that her character has a different trajectory than other moms you might see in this genre. "There are all kinds of moms out there, and I think it’s interesting to show a mom that is really young and struggling and trying to make ends meet and doing the best she can, and someone that’s still dating," she says, adding that she's glad not to be playing the "typical" mother trope of a woman "just rolling her eyes" at her kid. "She's got other things going on."

And Karen isn't perfect, especially in the way she overlooks how her boyfriend, Shane (David Lewis), treats Andy. Shane seems to threaten the boy, which leads Chucky to retaliate to demonstrate his dedication to being Andy's "Buddi." Plaza's hope is that viewers don't judge Karen, but see her as an imperfect person.

While Plaza, who's 34, acknowledges that she often plays characters less family-oriented and irresponsible characters, she says that she's "always looking to do something different." Not only does her Child's Play role allow her to show range, it also audiences an opportunity to contend with a mother character who can't easily be categorized as "good" or "bad."

"I feel like I was playing a woman who had a deep connection with her son ... but is maybe a little distracted by the idea that she thinks that a man will complete her family," she says. "To me, that’s what the movie was about. [Karen's] clearly got terrible taste in men and is maybe a little un-self-aware about her motivations."

But the terrifying events of the film strangely offer some clarity. "I think she realizes, ‘I don’t need a man to complete my family, this is my family, it’s me and my son,'" Plaza says. "I would hope that people could relate to that because everyone’s just doing the best they can."

Plaza's understanding of Karen allowed her to bring her trademark deadpan humor to a movie that's already surprisingly funny, mostly due to Chucky's freakish clinginess to Andy. "I think the humor just kind of occurs naturally because of the situations that she's in," Plaza says. Karen works at a Walmart-style store that sells the wildly popular Buddi dolls, and the actor says her blank-stare-heavy humor comes from putting herself in that place — "dealing with these customers that are losing their minds over these ridiculous dolls."

The Buddi dolls aren't just trendy. Produced by a company called Kaslan, they're "helpers" that can operate all kinds of devices. Child's Play's horrifying, worst-case-scenario view of that kind of expansive technology drew Plaza to the film. "I just think that we're making these advances in technology so fast, and there's not enough [analysis] on what the impact of this is going to be in the long run on all of us, so it all kind of scares me," she says.

This isn't the first film that Plaza has starred in that deals with how technology can interfere with one's life and go horribly wrong. In 2017's Ingrid Goes West, she plays a woman who uproots her life to stalk an Instagram influencer, attempting to replicate the her idol's seemingly perfect life. So how does Plaza personally fare with all of this stuff? "I feel conflicted about my own relationship with my phone on a daily basis," she says.

So though not every mom struggles with her son's "smart" doll trying to take over their lives, even in her most out-there roles, Aubrey Plaza sill has one foot firmly in reality.