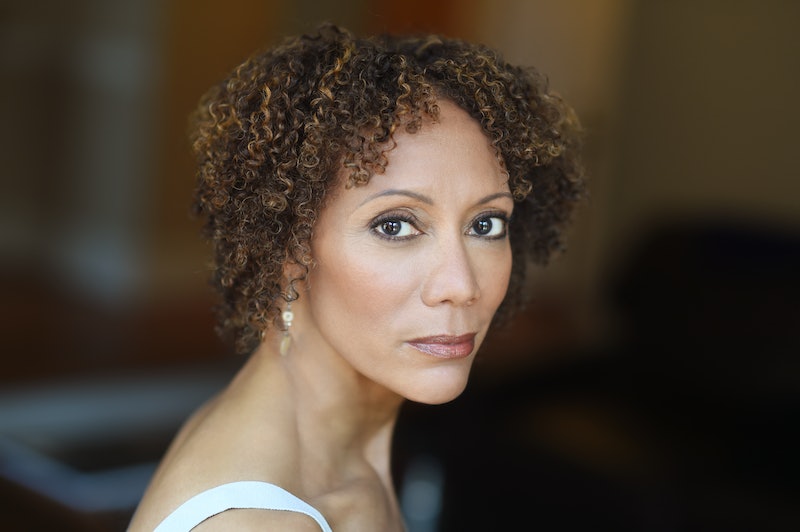 Image provided by Robin Miles
By Melissa Ragsdale
May 9, 2018

Anybody who has listened to an audiobook knows that they have enormous power to transport you into a story in a way that reading in print doesn't quite do. Much of that feeling can be attributed to the narrator — and Robin Miles is among the best. A 2017 inductee to Audible's Narrator Hall of Fame, Miles has narrated over 200 titles, including Roxane Gay's An Untamed State, N.K. Jemisin's The Broken Earth trilogy, Chimamanda Ngozi Adichie's Half of a Yellow Sun, Margot Lee Shetterly's Hidden Figures.

"When you hear a really good narrator, you get the benefit of a certain level of emotional intelligence," Miles tells Bustle. "Because when I read a book, I'm focusing on... what's implied in the text by the author, but not specifically explained. You have to kind of pull up implication, you have to detect. So I think that you get past the level of just the meaning of the words and you can really shine a light on nuance. Which is a second level of comprehension."

According to Miles, this second level of comprehension is invaluable for being able to communicate in the real world, whether you're building a political campaign or selling your script to Hollywood. "I just think that in the world we live in, soft skills, anything related to emotions, are downplayed and considered not important, only the hard skills. And in this case, that's not true," she says. "This is all about communication skills, and anyone who wants to go into politics has to be good at this, you know. Or any kind of negotiation. Or pitching...all those things where you're basically selling an idea, a concept or a notion, they want the better communication skills and you need to be able to do things like imply, as opposed to just straight-out tell."

Miles got her start by narrating audiobooks for the visually impaired through the American Foundation for the Blind and the National Library Service. A recent drama school graduate who had just moved to New York City, she stumbled upon the gig while searching for community service opportunities. Miles was rejected on her first audition, but after some coaching, she was approved on the second try.

Miles learned how to do the job while on the job; she listened to veteran performers as they recorded before and after her own sessions and internalized those lessons. She eventually "made the jump to light speed" and began working for Recorded Books. Now, she not only narrates audiobooks, but she also directs and produces the recordings.

When she first began this work, Miles was surprised to find that narration was extremely segregated. "It was like, 'You do the black books, and you're Jewish, you do the Jewish books.' I was totally shocked," she says. "But, it's kind of morphed. It really started out with such a small pool of people, that the people they had did everything whether or not they could handle the accent and culture. And then, when a little more diversity came in, it was like, well nobody can do anything outside of their yard. And now, I think we're also beginning to hopefully, break through that again."

When you hear a really good narrator, you get the benefit of a certain level of emotional intelligence.

The process for recording was not quite what Miles expected either. For instance, there is no period of rehearsal before the recording is made. "I get enough time to read the book through once as my rehearsal," she says. "And I make all kinds of notes about what I observe and voices, and you know subtext. And then, you're on, kid."

Miles says that people are often also amazed to learn that the dialogue isn't recorded one character at a time — she reads the book line by line, switching between characters' voices as she goes. "That's my biggest challenge, is the dialogue parts," she says.

But channeling the voice for each character is a lot of fun, too. Miles says she draws upon instinct and what she knows about the physicality of the character. "I write down everything that's described about a character — so that I know they're tall and barrel-chested, and you know, they were shot in the shoulder years ago. So I'm trying to figure out how that person sits, and how they stand, and what's physically going on for them," she says. "I try and imagine what they might look like, where are they from, what are the influences on their speech. But first I want to know, really, who the character is. Are they quick to anger? Are they very girly? When were they born? I try and understand geographically, culturally, linguistically where they're coming from, and I make notes."

Miles also has very detailed system to keep track of pronunciations. She has to get creative with her research, especially when it comes to local names. She often talks to local librarians, police departments, and even the United Nations. "I was once directed to a Ghanian church to find somebody from Ghana so I could learn how to pronounce some stuff," she says.

Reading for a narration can be an intense process. "When I start reading it, I'm just open, I'm just taking things in. And I'm letting the words in my mouth, and I'm just speaking them, and I just have to see where it takes me... And that's what I do, I let it take me," Miles says. "Then once, I'm in it, I start to feel it out, and I really have to make sure that this is what the author wanted."

"I try and imagine what they might look like, where are they from, what are the influences on their speech. But first I want to know, really, who the character is. Are they quick to anger? Are they very girly? When were they born?"

Lending her voice to a project can be a personal thing for Miles. "Because I go deep, I go pretty deep," she says. "[An Untamed State by Roxane Gay] was probably the hardest thing I've done. I consider it probably the best performance I think I've ever done. That was personal. I wanted to do such a good job on that book. She did such a good job. The things she tries to say in that book about the meaning of family, that sometimes the people who are your blood relatives are not the ones who have your back. The ones who are supposed to sometimes don't. And family can be created out of other things. I found that to be tremendously uplifting in a book about, you know, the aftermath of a gang rape. She found a way to say something else that I didn't expect to find. And I just had to do really well on that, so I gave myself to it completely."

It's clear that Miles cares deeply about each project she works on, with a keen eye for finding unique stories and promoting diverse voices. Some of her most recent works that she's excited for are The Girl Who Smiled Beads by Clemantine Wamariya, the memoir of a woman who survived the Rwandan genocide as a young girl,Wake of Vultures by Lila Bowen, a YA fantasy about a biracial trans teen, and the forthcoming audiobook for Word Warrior by Sonja D. Williams, the true story of pioneering black radio producer Richard Durham.

For Miles, the ultimate dream is knowing that readers are experiencing these stories in a completely different and profound way because of her narration. "It's so exciting to know that people out there listen to my stories and they get something more from them," she says. "I couldn't imagine more payback from that."