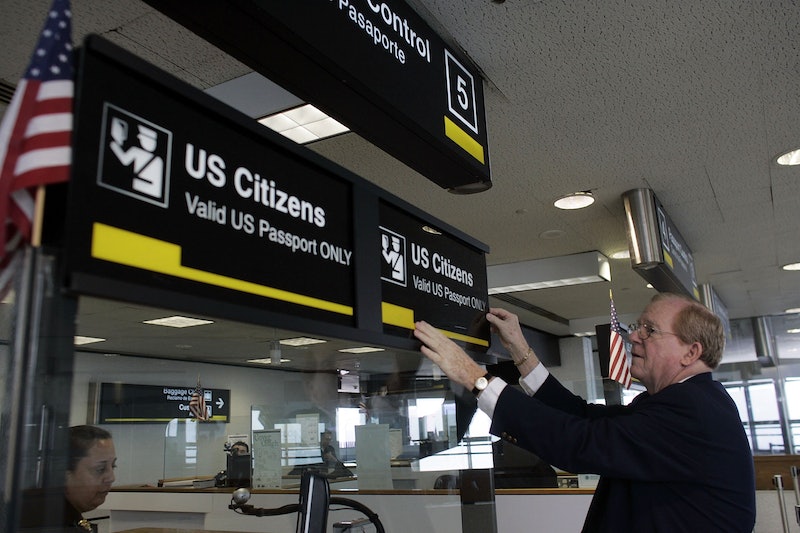 Increasingly aggressive U.S. border control policies are not doing us any favors: a leading Australian children's book author was detained at border control and treated so rudely that she says she will not visit the U.S. again. Mem Fox, who wrote Australia's bestselling children's book Possum Magic, traveled to Milwaukee in February for a conference, but was held at Los Angeles airport for over an hour and a half — an experience that she says left her "sobbing." Fox told the Australian Broadcasting Corporation that she thinks Donald Trump's proposed travel ban is to blame for the unpleasant new attitudes at the borders, saying that the agents have been given a "turbocharged power" to "humiliate and insult" visitors to the country — or even those returning home.

Muhammed Ali's son spoke up earlier this month about his own experience of the hostile agents; Muhammed Ali Jr. was detained at Fort Lauderdale-Hollywood International Airport and questioned repeatedly about his religion, despite holding a U.S. passport.

Mem Fox has visited the U.S. almost 120 times without incident, and praises the friendliness of ordinary Americans, but the treatment she received at border control was traumatic enough to scare her off visiting the country ever again. The 70-year-old author said, "I have never in my life been spoken to with such insolence, treated with such disdain, with so many insults and with so much gratuitous impoliteness. I felt like I had been physically assaulted which is why, when I got to my hotel room, I completely collapsed and sobbed like a baby." This kind of harsh and intimidating treatment is unacceptable anyway — but Fox maintains that she was actually traveling on the correct visa. She has since received a "charming" apology from U.S. officials, but the upset and fear that she felt will not fade that easily.

Mem Fox being held at border control is particularly ironic as she is about to publish a new children's book called Welcome to Australia — all about the importance of welcoming newcomers to the country. Her experience at the U.S. borders left her wondering, "How can human beings treat other vulnerable human beings in this fashion?"

More like this
The 20 Best Audiobooks To Fall Asleep To
By Aoife Hanna and K.W. Colyard
25 Quotes About Love To Share During Pride Month 2022
By Madeleine Aggeler and Emma Garza
Selma Blair Wrote Through The Pain
By Samantha Leach
Zosia Mamet Opens Up About Her Eating Disorder
By Zosia Mamet
Get Even More From Bustle — Sign Up For The Newsletter