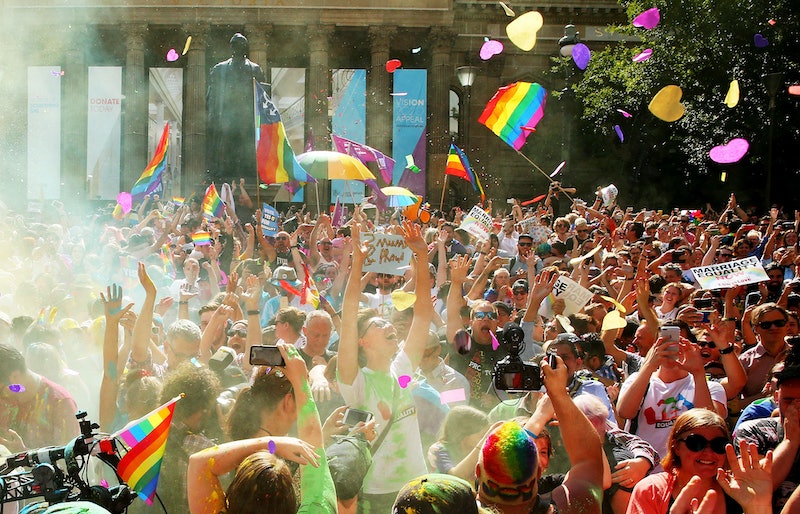 The results have come in from Australia's non-binding postal vote on the issue of gay marriage, and they're a resounding YES. Almost 62 percent of Australian respondents, 7.82 million people, declared that LGBTQ people deserve the same marriage rights as everybody else, and there was a YES majority in every single state and territory. It's a major step forward for marriage equality in a country where the issue has been a toxic one — but the result, and the campaigns that led up to it, also contain important lessons for LGBTQ people and believers in equality worldwide.

The fact that Australia hasn't legalized gay marriage yet may come as something of a surprise, as the country has a pretty good reputation for gay rights. And in most contexts, that reputation is well-earned: 79 percent of the population approve of homosexuality, according to a poll in 2013, and legal rights from same-sex adoption to protection from discrimination in housing and employment are widespread. But the marriage equality issue has proved to be a lightning rod for bigotry, and there are many aspects of this vote that are keeping Australians from declaring total victory too soon.

In a country of 24 million people, the win is a pretty decisive one, where 78.5 percent of the eligible voters turned up to make their opinions heard. But the postal vote itself is non-binding. This means that gay marriage is still not legal, though Prime Minister Malcom Turnbull has now promised that legislation should be passed before Christmas. The fact that this "vote" wasn't a proper legal referendum, and was instead a non-binding plebiscite, testifies to the peculiar weight and symbolism of marriage equality debates, not just in Australia, but worldwide.

The use of a survey rather than parliamentary legislation was the result of extensive campaigning by Australia's conservative right, who blocked the issue for years, and then attempted to make the result as toothless as possible. Many other LGBTQ rights have been accepted into the Australian mainstream without nearly as much fuss, but the idea of same-sex marriage represents real approval of LGBTQ relationships, which is both why the Australian right worked so hard to stop it and why marriage equality is so important. First lesson? The ability to walk down the aisle and be declared legally and publicly bound by the state, just like straight couples, matters a great deal. It's not just a rubber stamp.

Unfortunately, that conservative meddling also means this vote doesn't really do anything. What looks on the surface like a big win isn't all that progressive in reality: It makes people like me feel accepted, but it doesn't change anything on the ground. Second lesson? Always look at rights "victories" very carefully to see if they actually produce any change.

Additionally, the costs of this result have also been extreme for the mental health of LGBTQ Australians. The survey triggered violent bigotry around the country, from anti-gay marriage campaigners on TV, to graffiti and shouting matches in public. The rhetoric became such that on Sept. 13, the Australia Parliament had to pass emergency legislation to strengthen laws against hate speech, raising fines to over US$10,000. Putting same-sex marriage up to a public vote gave bigots a platform to distribute hatred, and revealed to the world what many queer Australians already know: that for a tolerant and relatively "equal" country, there is still a dangerous undercurrent of anti-LGBTQ sentiment.

For all its progressive appearance today, Australia's recent history with LGBTQ people is not a sparkling one. Australian authorities in 2017 are now re-investigating 88 murders in the 1980s and '90s that were likely the result of anti-LGBTQ hate crimes, which may date back to the 1970s. And violence against gay people in Australia continues: an IT manager was attacked by a group of men who shouted slurs at him on Sydney's gay club strip Oxford Street early in 2017, and was saved by the intervention of three drag queens. For many queer Australians, the YES result doesn't justify the means by which it was obtained, as it gave permission for prejudice and hate speech to come out into the open in full force. And that's the third lesson: that opponents can make sure that fighting for your rights is exhausting, brutal and terrifying, even if the result goes your way.

The fight also isn't over. The realities of same-sex marriage legislation actually passing are complicated by the Australian right, who are attempting to introduce "protections" to any marriage equality law that mean people can refuse to offer goods and services to gay weddings. (Australia doesn't have free speech explicitly in its Constitution, and current law holds that freedom of expression is restricted by "respect of the rights or reputations of others", so this may invoke a lot of legal wrangling.) Fourth lesson: fights for equality aren't always a blanket success, and the details matter.

Queer Australians deserve to celebrate, and to have the world celebrate with us. But it's also important to take wisdom from this fight. Fights for rights are not all the same; they can be conducted in ways that welcome and avow brutality and hatred, and their results don't mean that everything is immediately OK forever, or that the past is going to be forgotten.