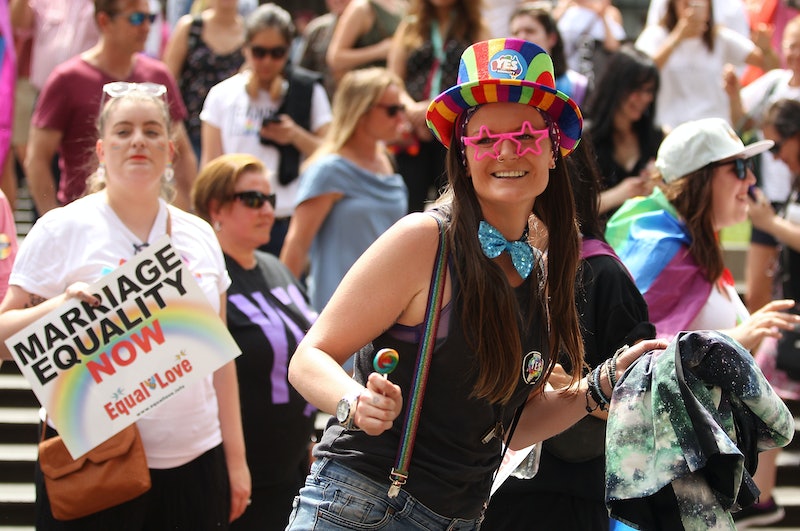 Australia may be inching closer to legalizing same-sex marriage after 61.6 percent of Australians declared support for marriage equality in a survey targeting over 12 million people. The historic news, announced by officials in the country on Wednesday, was celebrated by Australians getting together in public venues across the country. Participation among voting-age Australians around the country was at a remarkably high point with almost 80 percent voicing their stance on the subject.

The proposal for a national survey seeking a clearer picture of Australian support for or opposition against marriage equality was Turnbull's own idea. Known as "The Australian Marriage Law Postal Survey," the nationwide and voluntary survey was held between Sept. 12 and Nov. 7. Recipients of the survey were asked one question, "Should the law be changed to allow same-sex couples to marry?"

Although the survey received a solid 61.6 percent "yes" notes, 38.4 percent opposed and cast "no" as their answers. One opponent, conservative lobbyist and spokesman for Coalition for Marriage Lyle Shelton, voted "no" in the survey and said, "While we are naturally disappointed in today’s result, we accept and respect the decision of the Australian people."

"Millions of Australians will always believe the truth about marriage," Shelton said, "that it’s between one man and one woman. It could take years, if not decades, to win that back."

Former prime minister of Australia and member of the Liberal Party, Tony Abbott, shared his official statement on the outcome on Facebook. Abbott congratulated the majority that voted in favor of marriage equality and assured those who objected that their "freedom of religion" was under no threat.

"I congratulate the 'yes' campaign on their achievement," Abbott said. "The people have spoken and, of course, the parliament should respect the result. I also thank the 4.7 million Australians who supported marriage between a man and a woman. Both the prime minister and the opposition leader have pledged their support for freedom of religion. I look forward to a parliamentary process that improves on the Dean Smith bill to implement same sex marriage with freedom of conscience for all, not just the churches."

Australia isn't the only country to use a more public and open mode of opinion assessment on the controversial and perennially contested issue of same-sex marriages. Ireland held a referendum on marriage equality in 2015 and legalized same-sex marriage through popular vote. In doing so, Ireland became the world's first country to approve same-sex marriage through a referendum. In a strikingly percent similar to Australia's "yes" votes, a reported 65 percent of Ireland showed support for legalizing marriage for gay and lesbian couples. It was a profound victory for LGBTQ activists in the conservative country.

It's worth noting that while the nationwide survey result is inspiring for the LGBTQ communities in Australia, the outcome is not legally binding in any form. Regardless of the majority of "yes" votes, the survey's outcome cannot force the parliament to legalize same-sex marriage in the country. It can, however and perhaps most importantly, encourage the Australian parliament to move closer to legalizing marriage for gay and lesbian couples through sincere dialogue in the heated political arena. Such a survey could very well pressure the country's parliamentary figures to give serious and thoughtful consideration to democratizing the oft-exclusive institution of marriage.

More like this
Read Dan Levy's Heartbreaking Message After The Club Q Shooting
By Stephanie Topacio Long
Footballer Jake Daniels Shared His Thoughts On A World Cup Boycott
By Sam Ramsden
What To Know About Martin Bashir After Watching 'The Crown'
By Bustle UK
Iran Has Issued A Death Sentence Over Mahsa Amini Protests
By Catharina Cheung, Darshita Goyal and Maxine Harrison
Get Even More From Bustle — Sign Up For The Newsletter