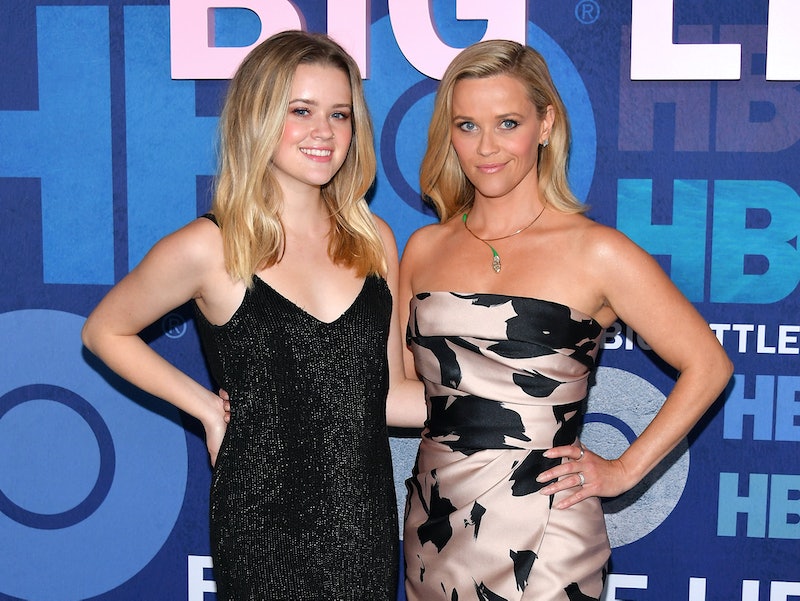 Now, this is one unexpected consequence of announcing a relationship on Instagram. Ava Phillippe, daughter of actors Reese Witherspoon and Ryan Phillippe, recently posted the first photos of herself and a new boyfriend. Cutely posing against a backdrop of palm trees, balloons, and a DJ, it's a super sweet way to introduce your beau to the 'gram. But when users started comparing Ava's boyfriend to her dad Ryan, things took an awkward turn for the 19-year-old, who is currently attending college at the University of California, Berkeley.

Ava's post, with photos that look straight out of Olivia Wilde's next teen indie movie is captioned, "this week >." Phillippe's week presumably did get off to a great start on June 9 with her mom commenting palm tree, heart, and starlight emojis, while Mindy Kaling accurately wrote, "These pics should a summer clothing campaign, i would buy it all." Days before, Ava even got to attend the New York Season 2 premiere of Witherspoon's series Big Little Lies alongside her mom (and presumably Meryl Streep!!).

But when several people started pointing out a striking resemblance between Ava's boyfriend and her father, her newfound happiness got a little bit complicated. One user's comment caught the eye of Ava herself. A user simply wrote, "He does not look like your dad." Ava gratefully responded to the comment, "big thx." Short, simple, and to the point. It's a relief that Ava will *hopefully* be able to move past comparisons to her famous parents moving forward. I mean, it's not that revolutionary for kids to resemble their parents, right?

It's no secret that Ava and her younger brother Deacon, 15 can often look like throwback versions of their famous parents. Witherspoon and Phillippe were together for nearly 10 years before splitting in 2006, after famously co-starring in 1999's Cruel Intentions. Any look at the former pair's two children requires a serious double take.

Naturally, fans brought this comparison to the comments section under Ava's post with her boyfriend. Per Buzzfeed, one user wrote under the 19-year-old's post, "He looks so much like your dad omg." Another chimed in, "You and your mother have the same type, looks exactly like your dad omg." Over and over again, several comments reiterated the sentiment that Ava was dating someone who looked like her famous father. (Which is a totally weird observation to make, by the way.) One user even expressed some '90s nostalgia by commenting, "Omg so cute..that picture makes me remember when Reese&Ryan were together."

Some users came to Ava's defense on the 'gram, by exposing how odd it is to compare someone's significant other to their parent. Among the comments included the all-too-obvious sentiment that, "Who wants to hear that their boyfriend looks like their dad. Nobody So if you think so keep it to yourself."

And now that Phillippe has let her feelings on the matter be known, perhaps her next relationship post will reference the hoopla? A spot-on caption addressing the comparisons could clear things up once and for a

More like this
The Try Guys Cheating Scandal, Explained
By Grace Wehniainen
'The Crown's Matt Smith Reveals Prince Harry's Hilarious Response To The Series
By Bustle UK
Dixie D’Amelio & Noah Beck “Love Each Other” Despite Breakup Rumors
By Julia Emmanuele, Jordyn Tilchen and Grace Wehniainen
Hailey Bieber Just Responded To *That* Viral Met Gala Moment
By Radhika Menon and Sam Ramsden
Get Even More From Bustle — Sign Up For The Newsletter