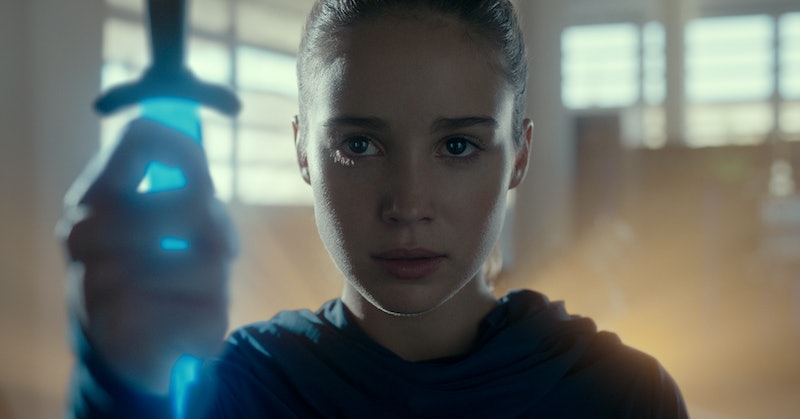 In Netflix's Warrior Nun, orphan Ava is given a second lease on life. She starts the show dead on a table but is suddenly revived when an angel's halo is inserted into her back, making her the unwitting leader of a secret order of nuns. This comes with a host of lifestyle changes, including the daunting task of battling demons, but Ava's powers in Warrior Nun perhaps take the most adjustment. They also mark a big departure from the comics the show is based on.

Warrior Nun is a loose adaptation of Warrior Nun Areala, an American comic created by Ben Dunn and published by Antarctic Press in 1994. Unlike the Netflix series, the comic is full of scantily clad nuns and focuses mainly on Shannon Masters, the Halo-Bearer of the Order of the Cruciform Sword (aka the Warrior Nuns) and the predecessor to Ava in the show. The avatar for the ancient Valkyrie Auria, Shannon is a devout and humble nun who fights mainly using her robotic arm and her gold "God Armor," which she cheekily transforms into much like Sailor Moon.

In contrast, Warrior Nun's Ava does not appear in the comics at all. Ava is everything that Shannon is not, and that difference is embodied in their powers. Though both Shannon and Ava are orphans who are revived by the order's halo, Ava is adamantly secular, and she struggles with selfishness and responsibility throughout the series. Fittingly, Ava doesn't fight enemies head-on, but instead has the ability to phase through walls — something she often uses to literally run away from her problems. Like X-Men's Kitty Pryde, she can make herself intangible so attackers whoosh right through her.

Being the Warrior Nun also allows Ava to see wraith demons — which appear as a red mist before possessing humans — and kill corporeal demons, as long as she's wielding a sword made out of the ancient metal divinium. She gives off high energy levels too, and in one notable scene melts a divinium dagger, implying that her powers will only continue to grow.

In this way, Netflix's Warrior Nun can be seen as a continuation of the comics rather than a direct adaptation. Speaking at Spain's 2019 Freakcon, showrunner Simon Barry said they merely used "the mythology of this universe to tell our story" rather than attempt a direct re-creation. Besides, Dunn's story of a super sexy yet pious nun is dated at best and offensive at worst; even in 1997, the comic inspired controversy. "It’s 2019, and women cannot be represented this way," Barry said at Freakcon.

As a result, Ava is a young woman who wears battle-appropriate (and organ-protecting) attire, is hesitant to embrace her destiny, and is skeptical of religion as an unequivocal force for good. She's no Sister Shannon, but she's infinitely more relatable.