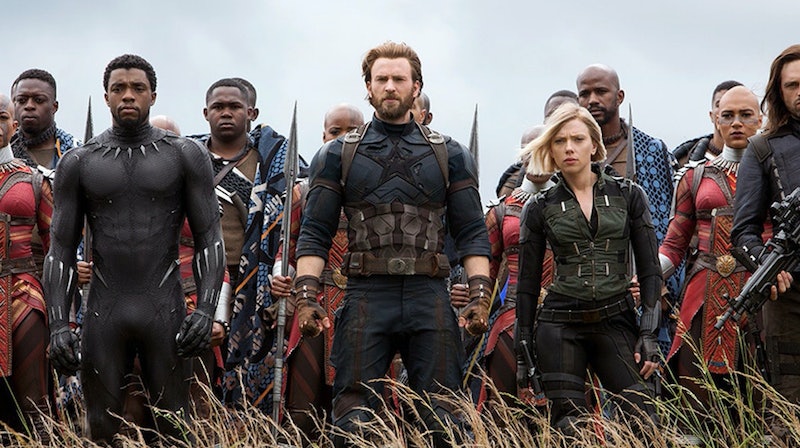 Now that we finally live in a world where the Marvel Cinematic Universe is about to get the rights to a whole slew of new characters, there has never been a more prime opportunity for me to get on my dorky soapbox and inform you that Avengers: Endgame and Spider-Man could set up a Fantastic Four reboot so stunning that you might almost forget that time that Chris Evans once covered his junk with a tiny pink coat after setting himself on fire as Johnny Storm. (I said almost.)

Anyway, I am of the not-so-humble opinion that when the pending Fox-Disney merger goes through, we need to capitalize on the perfect timing for the Fantastic Four, stat — an opinion Kevin Feige seems to agree with, but that I'm going to advocate for aggressively anyway. First of all, there's the easy tie-in for them — we can blame the space anomaly that gives the four of them their abilities on Thanos's shenanigans. Second of all, we need some iconic heroes to take the stage after Marvel presumably guts a large number of the other ones. And third of all, we need some momentum in this universe to keep the party going, and this would be one fantastic (sorry) way to do it.

While we're all (rightly) focused on the pivotal ending of Avengers: Endgame, we have yet to discuss what exactly the aftermath of that looks like, beyond Peter Parker's hijinks with Mysterio in Europe. Presumably, Ross and all the other people pushing the Accords will still exist, or we wouldn't have bothered giving them precious airtime in Avengers: Infinity War that could have gone to Captain America's beard. That dynamic still existing means that, with the Fantastic Four, the government agencies trying to control the Avengers suddenly have the prime candidates to manipulate instead: four super-powered people whose identities are quite public already, who have already been working within the frames of government agencies for military and research purposes, and would be much, much easier for them to control.

So that's how we'd bring these new heroes to the front — from the ashes of the Avengers (RIP in advance), we have this new team that the government is — surprise! — totally okay with. This would be a boon for Marvel fans because it would deliver that comic relief that we all will invariably need, as the Fantastic Four struggle to get their sea legs; it will reintroduce that awesome tension that the MCU has set up right now with the Accords, and give it a fresh twist; plus, we'd breathe new life into this franchise by giving it the Spider-Man: Homecoming treatment, where we lessen the focus on the origin story and give these heroes a chance to come into their own.

And oh, are the possibilities for them coming into their own ridiculously juicy. Depending on who remains in the MCU after Endgame, we could have some heroes totally against the Fantastic Four existing, and some begrudgingly supporting them anyway. (And, of course, Spider-Man waffling between both, which is a whole other cavern of possibilities I'm about to get to in a bit.) We also have this incredible dynamic of the Fantastic Four being "celebrities" — something Marvel obviously hit on with Tony Stark, but will be made even more timely and funny, given what "celebrity" looks like in 2019 (think: Johnny is never not a Twitter Moment; Sue's old professors getting quoted about her in TMZ; the regrettable yet inevitable "18 Times You Thought Dirty Stuff About Mr. Fantastic's Limbs But Tried Not To Because He Seems So Damn Wholesome" article; the even more regrettable inevitability of Tumblr calling The Thing "Daddy").

Anyway, back to the movie I am writing for Marvel without their permission or acknowledgement: if we set it up this way, the arc of the story would be both the Fantastic Four coming into their abilities, and also trying to find a place to fit into this new world they've been thrust into — and ultimately discovering that everything isn't as it seems. By the end they'd band together, save the day in some way that's a massive "screw you" to the agencies trying to control them, and prove to whatever Avengers remain that they aren't just a bunch of flashy celebrities that snap flames out of their fingers and jump rope with their arms, but actual, reliable heroes.

But back to my the Spider-Man bit. This also solves the problem of how on earth do we assert Peter Parker, teenage newbie, as an authority in the MCU? Easy: we have him come back from his jaunt in Europe to find four green superheroes set loose in his city, and task him with — however enthusiastically or reluctantly, depending on the tone Marvel goes for — showing them the ropes. This would ease the transition of Tony being in charge of Peter, assuming that Marvel is about to pull a very large Mufasa under the rug of that relationship, and also provide a perfect opportunity for Johnny Storm and Peter Parker to be the mortal-enemies-turned-best-bros they were always meant to be.

And while I'm on that beat, how awesome would that be? To have two teen superheroes in the MCU, so totally at odds: Peter Parker, protecting his identity at all costs, trying to uphold the legacy Tony and the other Avengers have left for him, versus Johnny Storm, who will likely be #sponcon-ing on Instagram and just short of tweeting his social security number out to millions of followers within the first week of having powers. They're going to absolutely hate each other and then be absolute best friends for life and please, for the love of Thor, will be given a spin-off.

TL;DR: Follow up Spider-Man: Far From Home with a Fantastic Four reboot, give the MCU the boost it needs after scorching the superhero roster, (let me co-write the script), profit.

Thank you for coming to my Ted Talk.