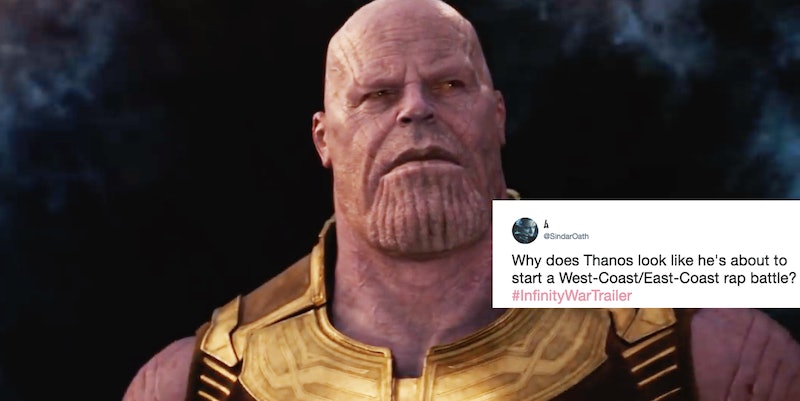 There's no sight quite like the Marvel fandom when a new trailer comes out, and the release of the Avengers: Infinity War trailer certainly has fans lit. That's most evident in all of the Infinity War memes and jokes on Twitter that even the most casual fan of the Avengers franchise needs to see, because they are just that funny. Between complete meltdowns to meme-worthy reactions to moments in the trailer to jokes that should already go down in infamy, you'll never watch this clip the same way again after you've seen what Marvel fans are saying on social media.

It's easy to understand the commotion. After all, the trailer appears to show Peter Parker in what could be an Iron Spider suit as well as featuring a welcome appearance from T'Challa (something that might help abate your Black Panther hunger with months still to go before the solo movie drops in February). Even if the trailer wasn't as fire as it is, people would be excited. With the movie focusing on Thanos trying to complete the Infinity Gauntlet so he can, as Infinity War co-screenwriter Stephen McFeely said "re-balance the universe as he sees it," the stakes are the highest they've ever been.

1.When You're So Engaged, You're Watching From Behind The Sofa

Nobody gets to mess with Spidey like that. This whole trailer has you all riled up like Patrick in tantrum mode.

2. When Thanos Is Giving Off Serious Tupac VS. Notorious B.I.G Vibes

Is the soundtrack to this thing the song "F*ck wit Thanos Day (And Everybody's Celebratin')?" (yeah, he stole the premise from Dr Dre). Because Thanos' whole look here is very mid '90s diss track.

3. When You're A Long-Time Fan And You're Overwhelmed And Life Is So Beautiful Right Now

It's been two long years since Avengers: Age Of Ultron dropped and who isn't ready for the gang to get back together again?

4. When You're A Quivering Mortal Minus Any Superpowers But Would Lay Down Your Life To Ensure Peter Parker Is OK

Adorable plastic water guns at the ready, team. Nobody messes with the adolescent man spider and lives to tell the tale. Even Thanos better back off.

5. When You're A Compassionate Marvel Fan And You Can't Help But Feel Sorry For The Losing Team

This isn't being mean to DC Extended Universe fans, it's just facts. The New York Post's scathing tone was typical of the Justice League reviews when it concluded that it was "A pointless flail of expensive (yet, somehow, cheap-looking) CGI that no amount of tacked-on quips, or even Gadot's luminescent star power, can rescue." Also, that 41 percent Rotten Tomatoes rating wasn't... great.

6. When The Music Plays And You're All In

Not a coincidence, by the way. According to IMDb, Alan Silvestri, who Slash Film called "the composer behind the only memorable [Marvel Cinematic Universe] musical scores so far" composed the gorgeous sounds that will be accompanying this film.

Better start coming up with your "my allergies are playing up" excuses for full on weeping in a cinema right now.

8. When You've Watched A Character Grow

To be fair though, who hasn't grown more grizzled and nihilistic over the past six years in the United States?

9. When It's All Fun And Games As Long As No Fan Favorites Get Hurt

Seriously, though. There'll be riots in the theater aisles if any of the names on the list sustain serious injuries.

10. This Is A Really Good Point, Though

11. When The Gang Is Looking British Boy Band-Levels Of Good

When you're Harry Styles-level hip and you don't care who knows it.

Can't wait until May and don't know what to do to pass the time? Giggling your way through the #InfinityWarTrailer hashtag on Twitter isn't a perfect replacement for watching the movie itself. But it's damn well better than doing nothing at all.