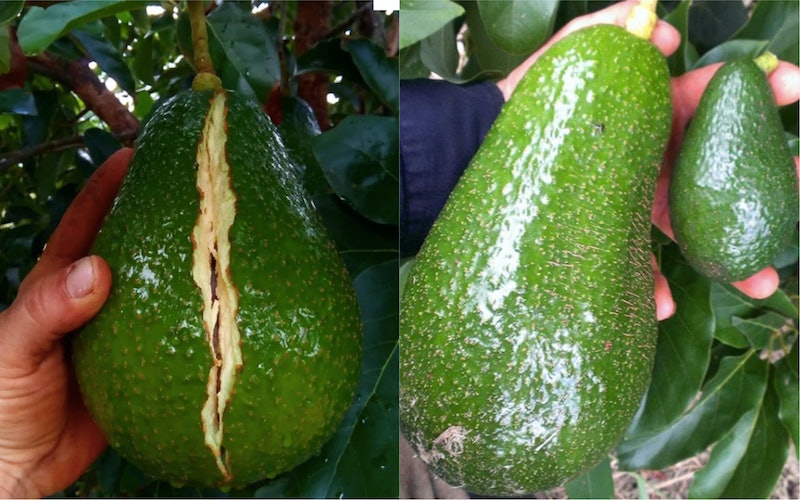 Ever cut open a perfectly ripe avocado without injuring yourself and think, this avocado is great, but could use more avocado? If so, Australia has just the thing for you. As Delish reports, giant avocados called "Avozillas" exist, they're just very hard to come by. Unless you're already in Australia. If you're already in Australia, congrats! You have a far better chance of being able to procure one of these babies.

The avocados are known as "avozillas", weigh almost three pounds, are the size of four "normal" avocados, and cost around AUD $12 (about USD $9). Apparently, they taste like regular avocados, but are a bit softer, according to Guardian Australia. This variety of avocado was developed in South Africa and is the result of cross breeding two different sub-species, as the Independent reports. The developers in South Africa hold the rights to the avocado, and the fruit made its way to Australia via farmers who were willing to pay royalties.

One farmer, Ian Groves, spoke to Guardian Australia and explained what a long process it has been for him to get avozillas ready to be sent to stores.

"There is a nursery we buy different trees off and when we were planting a bunch of avocados 10 years ago they gave us one as a trial," Groves said. "And after about four or five years, we tried a few of the fruit and thought we’d give them a go. So we planted a small block of about just under 400 trees. They’re coming up to about four years and this is their first production."

That's right. It took four years after he planted the trees — which David Groves, the farmer behind the Instas of the avozillas, notes to Bustle are called "postoffice variety avocados" — for the giant avocados to be ready. (Not surprising if you think about how long it takes a tree to grow; just gives you a look at the foresight farmers have to have.) The fruits are being sent to stores in Sydney, Perth, Brisbane, and Adelaide, so, again, if you're in Australia, you do have a chance of scoring one. That said, there won't be a ton of avozillas to go around since Groves said the trees were "light producers." He views the giant avocados as a novelty item, but said he knows someone planting 2,000 of the trees — it'll just be four years until those are ready.

If this all sounds familiar, that's because giant avocados have made waves before. "Carla avocados" were sold at Marks & Spencer in Great Britain for a limited time in 2016 for only £2.50 (that's just a little over $3). According to Huffington Post U.K., this variety originated in the Dominican Republic and it has green skin, which makes it sound similar to the Florida variety available in the U.S. (just an even bigger version). Britain also got big avocados in 2013 that were sold at Tesco and originated from South Africa.

Of course, just because these giant avocados are making headlines when they hit shelves in Australian and the U.K., doesn't mean a wide variety of avocados don't continue to exist and be produced — we just aren't seeing them in stores or talking about them. Even here in the U.S., you can buy a pretty big avocado if you try a Florida avocado, as opposed to Hass or California, it'll just have a different flavor and texture.

While you might not be able to get your hands on an avozilla — at least not yet— it might not be the worst thing. For one, you can buy at least four regular avocados with $9. For two, what if they don't taste as good as Hass??