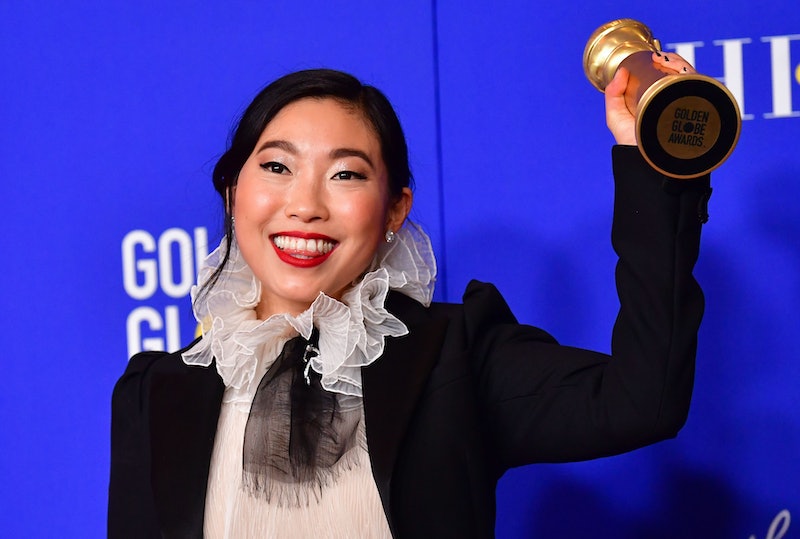 History was made on Sunday night, when Awkwafina became the first Asian American to win the Golden Globe for Best Actress in a Musical or Comedy. The actor took home the coveted prize for her work in The Farewell. And though she didn't address her history-making win in her speech, she did react to her historic win in the press room, saying, "I actually heard that fact and it was pretty mind-blowing." She continued, "It feels incredible... but you want there to be more. I hope this is only the beginning."

Progress might be slow for diversity in Hollywood, but it is still happening — The Farewell star's win is proof of that, no matter how small. It's especially interesting given last year's groundbreaking year for East Asian performers Sandra Oh and Constance Wu. In 2019, Wu was the first East Asian woman nominated for Best Actress in a Musical or Comedy in decades, for her work in Crazy Rich Asians — a film in which Awkwafina had a supporting role. And, though she is the first, hopefully, she won't be the last woman of Asian descent to win the Golden Globe for Best Actress in a Musical or Comedy.

Of course, for there to be more diverse award show winners, there need to be more diverse casting in Hollywood films. And that means more non-white leads, something studios are still grappling with. Awkwafina's history-making win will only open doors for other Asian actors if studios are willing to fund films starring people of color, and if organizations like the HFPA and the Academy of Motion Pictures prove willing to vote for them.

Hollywood's diversity problem aside, Awkwafina's win caused a lot of joy on Twitter, with fans celebrating not just the history, but the performance that won her the award in the first place.

Naturally, it wouldn't be Twitter if there weren't a few jokes made at the expense of presenter Scarlett Johansson, who was accused of whitewashing in her film Ghost in the Shell and announced Awkwafina's groundbreaking win.

And, with that, Awkwafina's historic win has earned Twitter's ultimate approval: shockingly genuine emotion and sarcastic jabs. And, really, what more can we ask for?