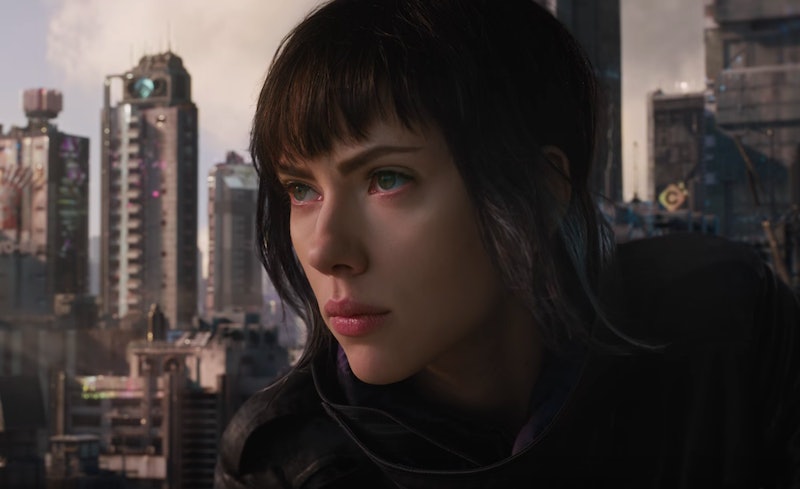 The new live action adaptation of the popular manga series Ghost in the Shell has been a subject of controversy, drawing accusations of whitewashing of the main character, Major. In the live action film, the traditionally Japanese character Major is played by Scarlett Johansson, a white actor. Instead of ignoring the controversy, Ghost in the Shell plays into it, making Major's ethnicity a significant part of the plot. Late in the movie, Major goes on a quest to find out her pre-Major identity, and discovers that she is — spoiler alert — a Japanese woman. Yes, really: the Ghost in the Shell twist is that the protagonist is a Japanese person in a white body.

Major's body — her "shell" — is entirely manufactured by Hanka Robotics. The only biological part of her body is her brain (known as her "ghost"), and the film begins with Major being told that her human body drowned, and her brain was all that could be saved. Her previous identity and ethnicity is unknown, just as it is in the original series. However, a brush with the high tech terrorist, Kuze, sends Major on a mission to find out what really happened to her pre-manufactured shell. That's when she finds out the truth: Hanka Robotics didn't save her life by taking her brain and putting it in a robot body, they killed her to experiment on her. And, when Major discovers that she is not who Hanka have told her she is, she goes looking for her real identity and finds Motoko Kusanagi, a Japanese girl (played briefly by Kaori Yamamoto). That's right: before she lived in the body of a white woman, Major was actually Japanese. Major has literally been whitewashed.

On the surface, the Ghost in the Shell twist seems like an innocuous science-fiction convention. Screenwriters Jamie Moss and William Wheeler likely saw the twist as an opportunity to add a new story to the Ghost in the Shell narrative, as in the original series, Major has a Japanese name, Motoko, but that's just a name given to her. The origin of her brain, her ghost, isn't explored. In fact, it's one of the things people have used to defend Ghost in the Shell against accusations of whitewashing.

In an interview with The New York Times, the director of the 1995 anime Ghost in the Shell Mamoru Oshii supported Johansson's casting, noting "The Major has a Japanese name, but she's a cyborg. Her age and background are unknown, just as much as her nationality." Such a defense might have worked, if Ghost in the Shell didn't insist on revealing Major's backstory as that of a Japanese woman. By giving Major a new identity, the live action Ghost in the Shell gets to add something new to the franchise. Unfortunately, that something new is the erasure of a Japanese character in favor of a white movie star.

It's not just that Major is, essentially, a Japanese mind in the body of a white person, it's that the white body is that of someone largely considered one of the most bankable movie stars and most beautiful people in the world — someone who has become a Hollywood beauty standard. In the film, Major's body is the ultimate desire, the pinnacle of mechanic "enhancements" enjoyed by everyone in Ghost in the Shell. In other words, Major's white body is considered an improvement from Motoko's Japanese one.

The idealization of Major's synthetic body serves to advance white standards of beauty — an all-too typical move in Hollywood. In a confrontation with another robot, Kuze, Major is told that she is "beautiful;" another character describes her as "pure." The not-so-coded implication seems to be that non-white bodies are less attractive and possibly even defective.

Later in the film, it's revealed that Major is not the first of her kind. Kuze, the only other robot with a human brain that survived, was also made to have the body of a white person (played by Michael Pitt). It's unclear what Kuze's original ethnicity was before his brain was put into his new, robotic body, but the fact that both Kuze and Major were crafted as white bodies suggests that Hanka is just in the business of creating white bodies. As explained by Dr. Ouelet (another white character played by Juliette Binoche), Hanka Robotics' cyborg creations are the next step in evolution. As the human body becomes obsolete, Hanka believes that people like Major will take over and because the film has only shown us "people like Major" who are white, it stands to reason that white bodies are the future.

There are many reasons why Johansson makes a great Major in Ghost in the Shell. She's tough, badass, and is damn good at playing a superhero. What she isn't is Japanese, and it's a shame that Ghost in the Shell tried to make her so.