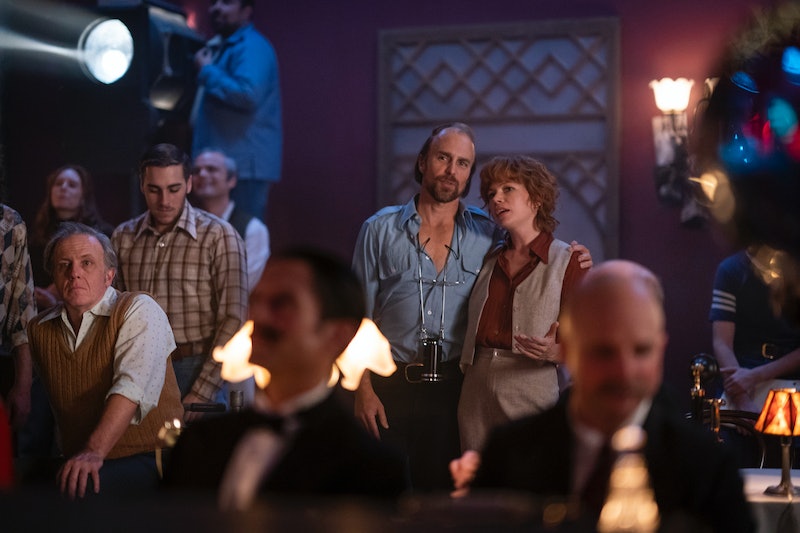 FX’s new show, Fosse/Verdon, explores the rollercoaster of a relationship between the legendary Broadway choreographer Bob Fosse and his equally iconic wife, dancer Gwen Verdon. There are also tons of supporting characters based on real life, such as Liza Minelli and Neil Simon. In fact, Aya Cash’s Fosse/Verdon character Joan Baim — wife of playwright Neil Simon — has a super important role when it comes to helping her friend Gwen out during some of the tougher times of her relationship and career. Really though, her life is just as fascinating and worthy as a spinoff. Maybe next season?

According to the New York Times, Joan Baim met Neil Simon, famous for shows like Barefoot In The Park, Brighton Beach Memoirs, and The Odd Couple, in the early 1950s at Poconos resort Camp Tamiment. She was a children’s counselor, and he (along with his brother) wrote comedy, putting together the weekly revues for the resort. "The first time I saw Joan she was pitching softball," Simon told the New York Times.

"I couldn't get a hit off her because I couldn't stop looking at her.” They married after the summer, and Joan’s mother, Helen Baim, noted that they forced a tight duo. "I noticed one thing almost as soon as Joan and Neil were married," she told the New York Times. "It was almost like he drew an invisible circle around the two of them. And nobody went inside that circle. Nobody! When the children were born, of course, they were in the circle. It took quite a while before I was allowed in, too." Joan died in 1973 of bone cancer at age 41.

Cash was attached to Fosse/Verdon in 2018, and she explained to The Cut that Joan was important to Verdon because she had gone through the same things after giving up her own career as a dancer for Neil. “When she and Neil Simon had kids, she stopped dancing and sort of let him be the star, so she helped Gwen Verdon deal with a lot of the issues with her and Fosse and who gets to be the star of the relationship,” Cash said. It was easy, Cash said, to act like best friends with Verdon on set because Michelle Williams, who plays Verdon, is so wonderful. “Sometimes you meet people you admire and that can be intimidating or disappointing, but Michelle is extremely warm and welcoming, and that has made things infinitely easier and better,” she said.

Verdon and Joan were close not only because their husbands worked together but because they both dealt with the same kind of partner — artists like Fosse and Neil Simon who wanted to be the only star in the night sky. It’s not something that everyone is cut out for. There’s not much out there on Joan and how she felt about absorbing that energy, but hopefully, Fosse/Verdon will shed a light on not only the male artists but the women who gave up everything to be with them, for better and (mostly) for worse.